Finding the roadmap for living with LHON

Every patient faces their own journey through life, learning about their condition with the best tools available to them. In the case of a rare disease like Leber’s Hereditary Optic Neuropathy (LHON), those tools can be few and far between, making it even harder for patients to plot the best course for them.

A trained journalist currently doing a PhD on the social aspects of LHON and president of Spanish patient group ASANOL, Pedro García Recover talks to pharmaphorum about his own path from diagnosis to living with LHON and working on behalf of his fellow patients.

Pedro was 14 when he was diagnosed with LHON, a hereditary condition whose symptoms are a rare, rapid and sudden loss of vision that leads to blindness in young adults. The condition can appear at any stage in a person’s life.  Pedro had no pain as the disease took hold, just a sudden – though not total – loss of eyesight in both eyes. Today he can see better with the left eye than the right.

Looking back on that time he recalls the tremendous feeling of uncertainty about what was happening to him as his eyesight began to deteriorate. “I didn’t know what was happening with my eyesight. I couldn’t see like I used to, and the specialist took a long time to resolve this uncertainty,” he says.

Achieving that resolution was not a simple process. To do so he visited medical facilities first in his home city of Almería and then travelled to Granada, Valencia and finally Málaga for answers about why he was losing his sight. It was only on arriving in Málaga that Pedro and his parents were told about LHON and the need to take a genetic test to confirm his diagnosis.

“In Málaga we were fortunate to find good professionals who helped us understand the disease and explained the cause.”

Since then Pedro’s quest to find out more about his condition has even guided his subject choice for a PhD, for which he is focusing on the social aspects of LHON. This taught him that “each LHON patient, regardless of their degree of eyesight, learns to live with LHON and tailors their life to their needs”. He also concluded that in Spain, where people living with LHON might also turn to the National Organisation of the Spanish Blind (ONCE) or the Spanish Federation for Rare Diseases (FEDER), patient associations should combine their efforts to work together.

However, even though he identified the social and political will to make progress in LHON education and treatment, Pedro says there is much more to be done in terms of access to studies and work. Additionally, specialists such as ophthalmologists and neurologists need to know more about the disease, particularly when it comes to “knowing how to understand the feelings of unease that patients and their families have when they search for explanations and diagnosis”.

He adds: “Families and patients have to have support to understand what has happened to them.”

But even when patients have an LHON diagnosis, confirming that genetic mutations have caused the cells in their optic nerve to stop working and provoke loss of vision, they still have to learn how to live with the condition and understand how it will impact their life.

For Pedro, as an adult with LHON, the condition does place some limitations on the access he has to work. “It is possible to have good academic training and work experience, but visual disability –caused by LHON – is considered a problem for many entrepreneurs with whom I’ve had job interviews,” he explains. The disease also brings with it a financial cost, in terms of obtaining things like accessible telephones, large computer screens and different kinds of lenses.

“As for care at home, we buy healthy food – products with properties such as anti-oxidants and vitamins, fruit, vegetables, fresh meat and fish to ensure a varied and healthy diet,” he says.

In addition to such items, he also relies on new technology for assistance, finding his iPhone particularly useful for accessing information. Beyond that, social networks are “a very interesting tool at this time”, despite the need for further progress in terms of their accessibility. They enable patients to connect, share and update information. On the other hand, they also require patients to have certain skills to use them correctly.”

Today in Spain there are several centres that can treat people with LHON, but the facilities available are a combination of private and public ones, generally located in large cities like Barcelona, Madrid or Seville, and access can depend on the family’s resources. Pedro says: “I’m very concerned about people who live in small or medium-sized cities, as normally doctors know very little about the disease. In big cities, there are large hospitals and a greater likelihood of doctors being able to diagnose LHON compared to a small city or town.”

To improve the knowledge of those outside the specialist centres, patient group ASANOL collaborates with laboratories and doctors to enhance their knowledge of the disease. For people living with LHON the non-profit organization offers information when the disease starts to present and LHON experts who can address clinical matters. To bring patients and their families together, the group holds a bi-annual social meeting in Spain.

Although only running for eight years the group has international expansion in its sights and is increasingly opening up across Europe. Looking further afield it has also formed partnerships in Latin America.

“We have helped to try and create patient organisations in some countries, although it isn’t easy doing this from Spain because of the legislation and structure of each country in Latin America. We contacted ALIBER, the Latin American Alliance of Patients with Rare Diseases, to help us provide services to people affected by LHON in Latin America.”

Adjusting your path in life

As a journalist, Pedro is keenly aware of how little media coverage LHON currently attracts. “We need more attention from journalists and media companies on rare diseases. Our sector must also become more professional and offer the media good quality news on which they can focus their attention.  What goes untold is unknown; it’s invisible.”

Although he’s reluctant to hand out advice, Pedro says he has learned a number of lessons from living with LHON. Among these is the important adjustment challenge that newly-diagnosed patients will face as they psychologically start to deal with their condition. “I usually use a phrase that I like because of how real it is: when the disease enters your life, change the intended road map.” 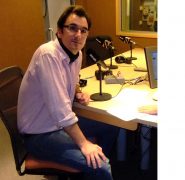 Pedro García Recover was born in Almería in 1978. During his adolescence he played handball until he was 14. It was at this age that he developed LHON. He graduated in journalism in 2004 and in 2009 he was awarded a master’s degree in social communication. He is currently doing a PhD at the National Distance Education University (UNED) on “Law and Social Sciences”. His thesis is on psycho-social aspects of Leber’s hereditary optic neuropathy.

Pedro García has spent a large part of his working life communicating with non-governmental organisations. He has worked in radio for over 5 years, presenting and directing programmes. He is a speaker, lecturer and expert in social communication and is involved in the management and strategy of social networks. He has participated in a number of national and international forums on the topics of human rights and people with disabilities. He has been working for the National Organisation of Spanish Blind People (ONCE) since 2016.

Pedro García is currently President of ASANOL, a Spanish organisation for those affected by Leber’s hereditary optic neuropathy (LHON). He was elected President in March 2018.

To read further articles in this series please visit our Disease Spotlight: LHON channel produced by pharmaphorum in conjunction with Santhera Pharmaceuticals.