The new Glasshouse hub for digital and tech companies has officially opened at the former AstraZeneca site in Alderley Park, Cheshire, and will shortly welcome its first tenants.

The £30m ($39m) project – occupying a location at the 400-acre Park’s campus – aims to attract companies that want to work closely with the growing group of life sciences businesses that have sprung up at Alderley park since AZ sold the site in 2014 and started its relocation to Cambridge.

The 150,000 sq. ft. building has been designed to provide space for companies working in areas such as big data, data analytics and artificial intelligence, which Alderley Park’s management says are “playing an increasingly key role in drug discovery.”

The Glasshouse unit is being managed by Bruntwood SciTech, a joint venture between property group Bruntwood and Legal & General Capital that is investing £247 million into the Alderley Park hub as part of a £360 million programme involving other locations across the UK that aims to create 20,000 science and technology jobs.

Alderley Park is the UK’s largest single site life sciences campus and is home to around 200 businesses and organisations, including the UK Medicines Discovery Catapult, Centre for Antimicrobial resistance and dozens of established and start-up biotech companies.

A spokesman for Glasshouse said that a number of tenants have already taken up space at the new facility, including Gendius – an AI company developing diagnostics for diabetes – that has moved to the new location from Alderley Park’s Mereside site. 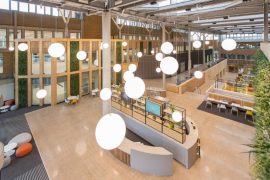 The unit has been designed as a “collaborative workspace” – including a central atrium that encourages networking – and flexible layouts for office space.

The building is located next to the new gym and sports complex, with a pub and restaurant scheduled to open nearby in the coming months, and like the rest of the Park has 100Gb broadband and ultra-fast Wi-Fi connectivity.

“Historically renowned as being home to one of the UK’s pre-eminent life science campuses, the arrival of Glasshouse signifies Alderley Park as a leading destination for innovative tech businesses too,” said Dr Kath Mackay, the Park’s managing director.

“Glasshouse offers everything from coworking to small and larger offices, making it ideal for entrepreneurs and start-ups as well as fast-growing and larger businesses,” he added.

Sidekick and Pfizer prep launch of DTx for atopic dermatitis