Trump to be President – but what does it mean for digital health?

Grabbing headlines around the world this week was the election of Donald Trump as the next President of the United States of America.

As soon as the news broke of the unexpected victory, there was a mixed reaction across different markets – Asian and European shares slumped because of fears that Trump will introduce new trade barriers.

For pharma however, the decision saw a slight increase in company stocks with GlaxoSmithKline, AstraZeneca and Sanofi all making small gains. In light of Hillary Clinton’s open ‘war on pharma prices’, Trump’s election was more than likely seen as a let-off for the sector.

What hasn’t been mentioned yet has been the effect of Trump’s victory on digital health.

His predecessor has been highly supportive of digital innovation in healthcare. During his 8-year tenure in the White House, President Obama has launched a number of initiatives to integrate technology into the way healthcare is developed and delivered – the most recent of which was the first-ever White House Frontiers Conference.

During the meeting, the potential of artificial intelligence (AI) in healthcare was discussed alongside the creation of a single clinical database for researchers across the US.

Obama has also helped implement national healthcare research programmes, including the Precision Medicine Initiative – aimed at crafting precision treatments to a wider range of diseases – and the Cancer Moonshot 2020 programme, attempting to accelerate the development of a vaccine-based immunotherapy for cancer.

Trump has some big shoes to fill, then. The one thing he did promise throughout his campaign was the repealing of the Affordable Care Act AKA ‘Obamacare’ – a decision that will directly affect an estimated 12.7 million Americans enrolled on the service.

Within the Act are the Health Information Technology for Economic and Clinical Health (HITECH) provisions which encourage healthcare providers to adopt federally-approved IT solutions – i.e. electronic health records (EHRs) – by providing the cut of an incentives pot worth $35 billion. An estimated 96% of American hospitals have now adopted EHRs, in comparison to the 12% prior to the Act being passed.

The Act has encouraged a digital health start-up boom in the US. Funding in the sector has seen a dramatic increase from $1 billion in 2010 to more than six times that amount in 2015 – and it continues to grow.

Trump’s plans for the health sector will become clearer over time, however his attitude towards his predecessor’s existing efforts does raise questions over how he will approach a field that found itself invigorated under Obama.

This week saw Propeller and GSK gain FDA approval for the use of a ‘smart inhaler’ device in conjunction with GSK’s Ellipta inhaler.

Attaching to the cover that sits over the mouthpiece of an Ellipta inhaler, the Propeller device records when the inhaler is used through an adapted sensor. Data regarding date and time of each use is then sent to a digital management platform including both a smart-device and web app.

The approval comes almost a year after the initial R&D deal was struck between both parties, at the time seeking an innovative method to deliver GSK’s dry powder medication. 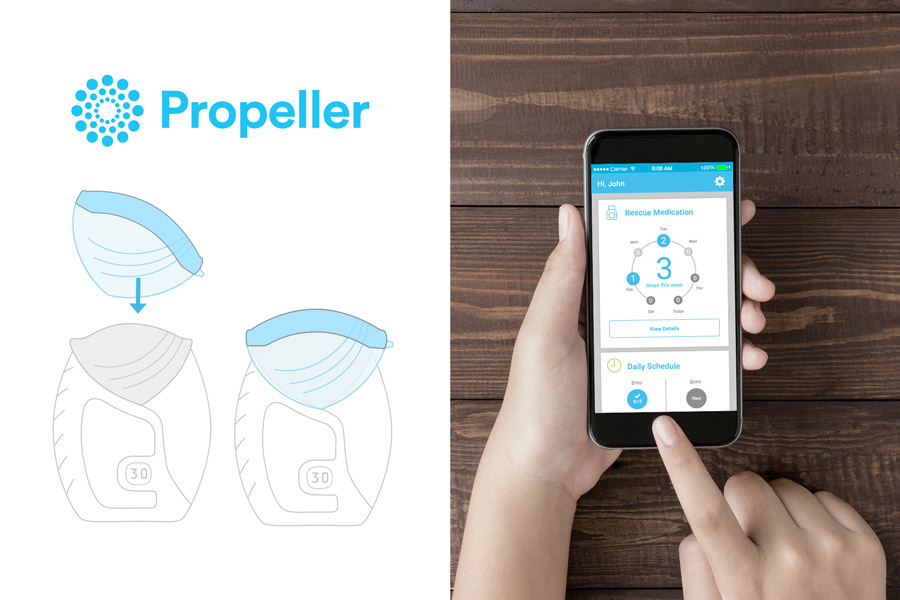 The Propeller sensor clips to the cap of the Ellipta inhaler. Data recorded is then sent to a smart device or web app.

The latest FDA approval adds to Propeller’s already busy 2016 – a year that has seen them partner with a number of pharmaceuticals, including Boehringer Ingelheim and Vectura, as well as secure seven separate FDA approvals.

The company also gained a big financial boost in October with the closing of a $21.5 million series C funding round.

With the new funds, the company hopes to expand its existing roster of digitally-guided therapy solutions.

Can a computer help prevent a suicide?

The promise of artificial intelligence, and the machine learning algorithms which drive it,  has been a big topic throughout 2016 to date. AI is the lynchpin to many big pharma deals with IBM Watson and Google DeepMind, who lead the application of AI in healthcare and other fields.

This week saw machine learning integrated into the prevention of suicides.

In a study published in Suicide and Life-Threatening Behavior, the study found machine learning software to be 93% accurate in identifying suicidal people.

Carried out by the Cincinnati Children’s Hospital Medical Center, a cohort of 379 patients split into three groups (suicidal, mentally ill but not suicidal and control) were given a standardised behavioural rating scale and questionnaire to complete. The questionnaire included questions such as “do you have hope?”.

Machine learning software was used to analyse the written responses along with audio samples. Not only could the software detect suicidal individuals with high accuracy, it could also differentiate between the suicidal trial participants and those that were mentally ill but not suicidal to an 85% level of accuracy.

Although a relatively standalone study into the area, the high degree of accuracy demonstrated in the trial suggests that machine learning could be a legitimate option in helping better manage suicidal cases, especially in regards to improving proactive prevention strategies.