The NHS has long struggled with the concept of digital integration. It hasn’t been for the lack of trying, however.

In 2002, the government launched the National Programme for Information Technology (NPfIT) in an attempt to improve secondary care. Unfortunately – for various reasons – the project failed, shutting down in 2011.

Other attempts at dragging the NHS into the digital era have suffered a similar fate. The NHS Choices Health Apps Library, launched in 2013 to provide access to a selection of smart-device apps approved by the NHS, closed late last year following a test period. Many linked the library’s closure to concerns over data privacy following a study published in BMC Medicine. 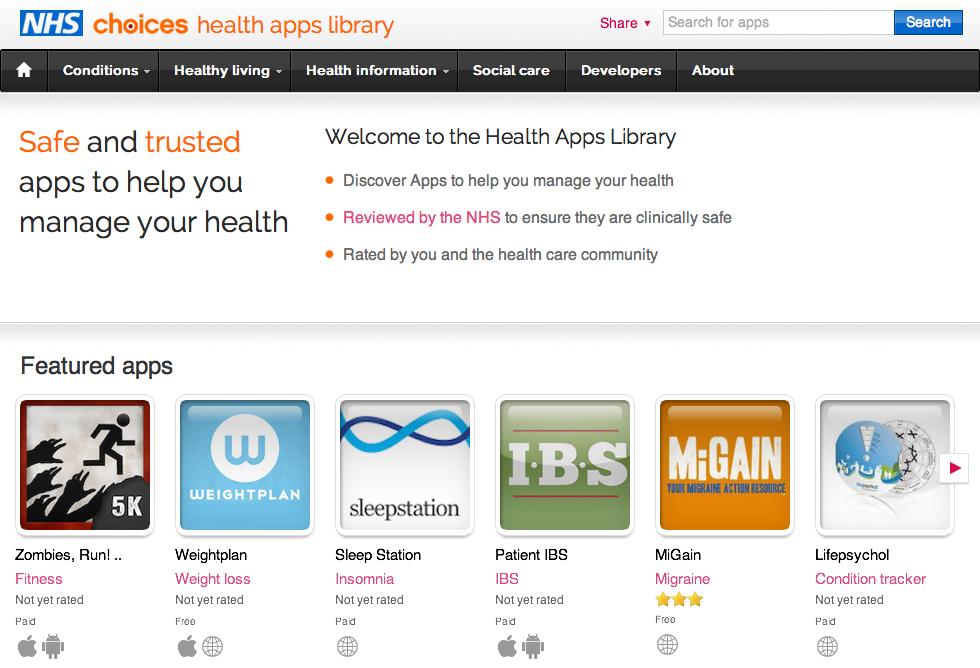 Then, in late 2015, the National Advisory Group on Health Information Technology in England was formed to advise the Department of Health and NHS England on digitising the secondary care system and digital integration.

This week, chair of the group Professor Robert Wachter delivered a damning report into the NHS’ current digital progress.

The 71-page report, entitled ‘Making IT work: harnessing the power of health information technology to improve care in England’, highlights 10 overall findings and makes 10 recommendations to remedy the situation.

Considerations that need to be made during the integration process include understanding the reasoning behind digitisation, quality versus speed of digitisation, centralised governance, and workforce training.

The report recommends carrying out a long-term national engagement strategy to emphasise how digitisation will improve the way care is delivered; appointing a national chief clinical information officer (CCIO) for every trust; and establishing ‘digital learning networks’ to support the purchasing, implementation and ongoing improvement of trusts.

Wachter believes a 2023 deadline for a paperless NHS is a more reasonable and achievable target, outlining a proposal for a 2-phase funding structure for the digitisation process.

In response to the report, Health Secretary Jeremy Hunt unveiled 12 ‘digital exemplar’ NHS trusts to lead the way in adopting digital. Sourced from the £100 million pot to develop centres of digital excellence, announced in August, each trust will receive up to £10 million to develop new digital approaches to care.

Part of the funding will be used to train staff and create a new generation of chief clinical information officers to drive digital advances.

Up to £5 million in funding will also be made available for a further 20 trusts to become national exemplars, alongside intensive training from a newly-established NHS digital academy.

Hunt also revealed plans for a number of other NHS services, including for the development of a single digital source for patients to register with a GP, access their health records and get medical advice.

The NHS Choices website will be re-launched as NHS.uk which will harbour a wider range of online patient services and a new NHS-assessed app library will also be developed, presumably to replace the 2013-2015 health app library.

Although Hunt’s intentions are good, questions remain over his capability to carry out his plans – especially with memories of the failed £12 billion NPfIT scheme still fresh in the memory.

It seems the hype and anticipation for a wearables revolution is finally coming to fruition.

In a report published by the International Data Corporation (IDC), the worldwide wearables market soared in Q2 of 2016 by 26.1% – represented by the record 22.5 million wearable devices shipped in the same time period.

Good news came for market leader Fitbit, which retains its place at the top of the list of the world’s biggest suppliers of wearables, maintaining its 24.9% market share and achieving a year-on-year growth of 28.7%.

The figures are in line with the company’s recently revealed Q2 earnings which indicated 42% and 150% year-on-year revenue growth in the US and Europe, respectively.

Second to Fitbit is Chinese electronics company Xiaomi, with a market share of 14%. The developer of Mi Bands, a hugely popular range of fitness trackers in China, with price tags of around $20, saw a small growth of 2.5%.

Although third in the rankings, Apple has experienced a dismal year. Considered Fitbit’s biggest competitor this time last year, the company has seen its market share drop dramatically, from 20.3% to 7%, along with a drop in year-on-year growth of -56.7%.

Compared to last year’s Q2 unit shipments figure of 3.6 million, the ever-popular iPhone developer has only achieved 1.6 million shipments this Q2 – the same number achieved by fourth-placed Garmin which, in contrast, has seen an exponential year-on-year growth of 106.7%. The company is poised to take third position with its current market share of 6.9%. 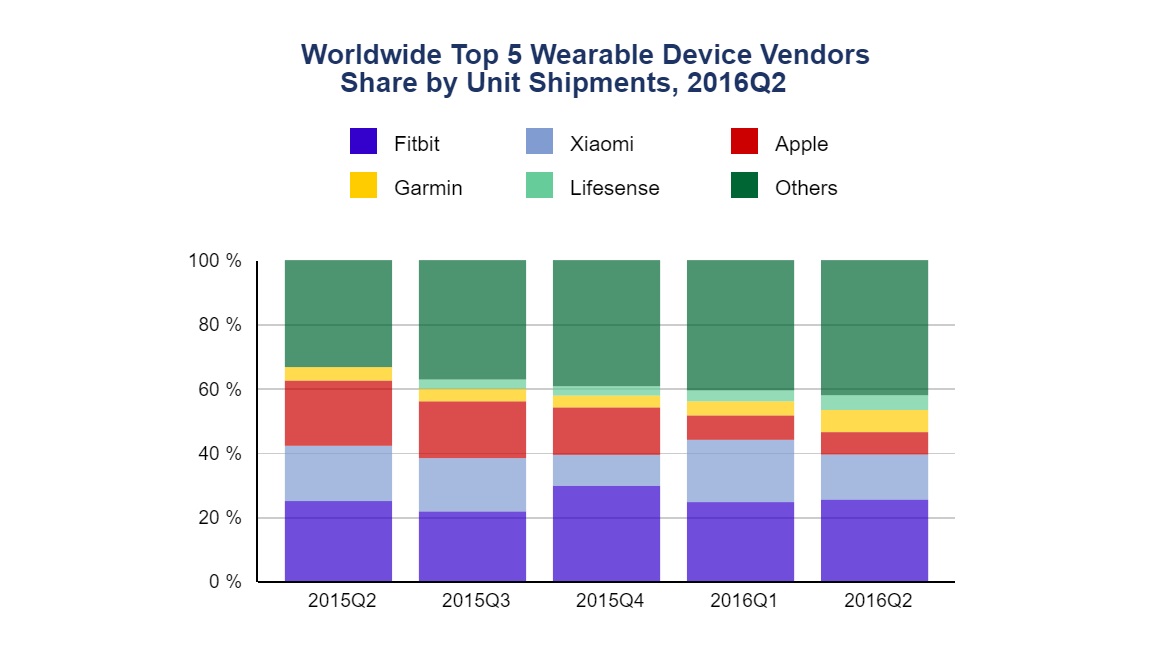 Apple’s unit shipments reflects the waning interest in its Watch smart device, showing a consistent decrease in each quarter since the Watch’s release in April 2015.

The basic devices sub-market, which includes Fitbit and Xiaomi’s fitness trackers, has seen a growth of 48.8%, whilst smart devices, like Apple’s Watch, have seen a decline of 27.2%.

The IDC’s report suggests that people are leaning towards affordable, basic devices with a clear definition of what is on offer, while smart devices are still trying to convince people of their ‘must-have’ status.

The report’s finding is an important reminder for the medical wearables industry, which is still in its infancy. It will come as an assuring report for Fitbit, which is gearing up for a push into the medical world. Apple, however, will be hoping its new Watch 2 device – with built-in GPS and water resistance – will reinstill confidence in it as a legitimate wearables contender.

Although a country with just over 1.2 billion people, India is rarely mentioned in the digital health sphere, which is surprising considering the current state of health affairs there.

The current doctor-patient ratio stands at 1:1,674, higher than the World Health Organisation’s recommended 1:1,000. In addition, India’s dispersed population poses a serious issue, with 70% of people living in rural areas while 80% of doctors are based in urban areas.

The deal will enable Narayana to offer diagnostic services in the areas of neurology, nephrology, oncology and cardiology at an affordable price via Cisco’s Virtual Expertise Digital Solution.

Cisco’s platform is essentially a two-way video communication network which will be deployed at district centres and multi-speciality hospitals of Narayana Health Group. The solution also enables real-time telemetry of medical device data, audio, vitals such as ECG data, medical report analytics, and a web-based portal.

The tech also features its own encryption abilities to ensure the safety and privacy of patient data.

Narayana claims that the technology will allow an in-depth clinical examination including a review of all relevant investigations, with the option to record entire interactions between patient and expert.