How does rare disease prevalence impact drug pricing in England?

In this second article of a three-part series exploring pricing in Europe, CRA’s Life Sciences Practice team discusses the role that disease rarity plays in reimbursement decisions among payers in England, comparing assessments by NICE versus the NHS.

Decision makers in the healthcare industry including payers, especially those who rely on the use of cost-effectiveness analysis (CEA) to evaluate new drugs, are often criticised for failing to capture the holistic value of drugs in their health technology assessments (HTAs). The criticism is fair, as conventional assessment criteria for reimbursement and pricing decisions do not typically include comprehensive analysis of a drug’s total value beyond its clinical benefits. This presents several challenges for manufacturers of rare and orphan disease therapies specifically, given they often cannot fulfil conventional assessment criteria due to unique factors generally associated with these drugs, such as small target populations, limited safety and efficacy data, and lack of clinical trial comparators.

Our team at CRA conducted a recent analysis to determine how the value of disease rarity is captured in HTAs in England, whether led by The National Institute for Health and Care Excellence (NICE) or the National Health Service (NHS). We focused on orphan drugs for chronic conditions as their potential for significant and long-term budget impact often attracts greater attention among decision makers.

Our findings showed that the likelihood of achieving reimbursement varies between these two different routes of assessment. Drugs assessed by NICE (via STA or HST framework combined) are more likely to be recommended for routine reimbursement (80.9%) compared with drugs evaluated by NHS England via a specialised commissioning framework (61.5%). Our findings also indicated that disease rarity cannot be used to predict the likelihood of reimbursement and thus is not a major driver of reimbursement decisions in either NICE or NHS England value assessments for rare and orphan disease drugs.

While we found that disease rarity is not a good predictor of the likelihood of reimbursement, we also sought to determine if NICE or NHS England assign value to disease rarity by other means. To do this, we explored the relationship between disease prevalence (expressed as cases per 10,000 persons) and the average annual treatment cost (AATC – based on list price) and whether this relationship varied between the two organisations. Results showed a strong but non-linear relationship between disease prevalence and AATC for drugs recommended by NICE – with drugs for the treatment of ultra-rare diseases achieving a higher AATC.

Two key differences in NICE’s STA and HST assessment frameworks can explain the relationship between disease prevalence and AATC. First, the eligibility criteria of the HST framework restricts access to drugs targeting “very rare” diseases (typically ultra-orphan conditions with a prevalence of <0.5 per 10,000). Second, there is a difference in NICE’s ‘willingness to pay’ based on the incremental cost-effectiveness ratio (ICER) thresholds associated with each framework. The STA framework’s ICER threshold is £20,000-30,000 per quality-adjusted life year (QALY) gained whereas the HST framework’s ICER threshold begins at £100,000 and can reach up to £300,000 per QALY gained. As a result, drugs assessed via the HST pathway are restricted to diseases with very low prevalence and have the potential to achieve a greater AATC because they can access a higher ICER threshold.

In contrast, our findings indicate there is no relationship between disease prevalence and AATC for rare and orphan disease drugs evaluated by NHS England via specialised commissioning. The specialised commissioning framework prioritises the clinical efficacy and budget impact of new drugs and does not formally incorporate the value of disease rarity. There are also no provisions within the framework that allow for higher costs based on disease rarity. Conversely, drugs that are either cost-saving or cost-neutral are subject to fewer assessment steps compared to those that require additional investment.

We also found that rare and orphan disease drugs recommended for reimbursement by NICE are often reimbursed at a higher AATC than those reimbursed by NHS England, with a median AATC of £220,256 (NICE) versus £147,156 (NHS). 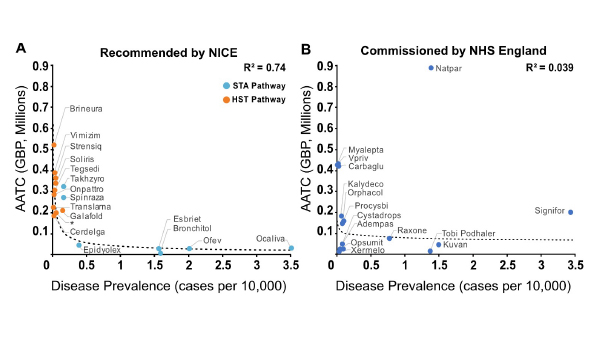 In our analysis, we also wanted to gain a better understanding of the level and type of commercial agreements that rare and orphan disease drugs are subject to in England. Many decision makers use commercial agreements to manage the uncertainty often associated with these drugs due to their small target populations and thus small clinical trial sizes. Our team focused on orphan drugs recommended for reimbursement by NICE given that the use of commercial agreements is clearly stated in their guidance; there is less transparency on use of these types of agreements by NHS England.

Findings showed that 90% of the orphan drugs we reviewed are subject to at least one type of commercial agreement, with simple discount patient access schemes (PASs) being the most preferred by NICE. In addition, NICE agreed to confidential discounts for 82% of the reimbursed orphan drugs in our analysis – this is about double the amount reported from another recent analysis of more than 300 orphan drugs assessed via the NICE STA pathway (41.5%). The size of discounts achieved for approved orphan drugs via commercial agreements can be large and have a significant impact on a drug’s net price and AATC, but in many cases manufacturers must choose between a high discount or no reimbursement. Commercial agreements can also potentially allow manufacturers to maintain the agreed upon list price, which is useful for subsequent launches in European markets that may use England for external price referencing.

Managed access agreements (MAAs) are another type of commercial agreement often used by NICE and can take many forms, including agreements with subpopulation restrictions, starting/stopping rules, real-world evidence collection requirements, and outcomes-based funding. MAAs are not as common as PASs, with only 30% of the orphan drugs in our dataset subject to these types of agreements. This is unsurprising, as MAAs can be complex and present challenges in implementation and additional administrative burden, which can be unattractive to reimbursement and pricing decision makers.

But MAAs also offer several advantages for manufacturers – for example, they present the opportunity to gain market access in cases where the level of uncertainty around a drug’s supporting clinical data is greater than usually accepted by decision makers when conducting HTAs. MAAs also allow for the ongoing collection of real-world data to strengthen a drug’s body of evidence and secure permanent or wider reimbursement.

NICE often receives criticism for a lack of holistic decision making but based on our findings the agency clearly assigns value to disease rarity more formally than NHS England. Rare and orphan disease drugs assessed by NICE are more often recommended, and typically at a higher AATC, than those assessed by NHS England, though this can be at the cost of net level discounts or conditional agreements.

Manufacturers of rare and orphan disease drugs approved by the European Medicines Agency (EMA) need to carefully consider their options for achieving reimbursement in England as their choice, NICE or NHS England, may impact both market access and AATC. Our team suggests using NICE’s HST pathway where possible as it offers the greatest opportunity to adequately capture the value of disease rarity. In cases where manufacturers cannot meet NICE’s cost-effectiveness thresholds, they have historically had the option to seek reimbursement via NHS England’s specialised commissioning pathway. Unfortunately, this may no longer be a viable option because as of April 2020, NICE is expected to handle reviews of all newly EMA-approved drugs unless there is “clear rationale not to do so.” Drug developers will need to monitor how their available routes to reimbursement might change in the years ahead and plan accordingly.

The first article in the series can be found here.

William Foster is an Associate Principal in the Life Sciences Practice at CRA. He is a research scientist by training, with consulting experiences being focused on pricing, reimbursement, and market access across a range of therapy areas.

Cécile Matthews is a Vice President in the Life Sciences Practice at CRA with over 20 years of experience in strategy consulting for the pharmaceutical industry. Her areas of expertise include pricing, reimbursement, and market access globally.

Eva Marchese is a Vice President in the Life Sciences Practice at CRA with over 20 years of experience in life science strategy consulting. Prior to CRA, she was a Senior Principal of Pricing & Market Access at QuintilesIMS, and a Professor of Public Management and Policy at Bocconi-SDA.