The US president took his frustration to twitter criticising Pfizer and “others” for the recent price increase and “taking advantage of Americans”, but there is really not much he can do to stop it.

Last week we reported about the largest standalone drug maker in the US, Pfizer, announcing an increase of dozens of drug prices on the American market.

Pfizer said in a statement: “The list price remains unchanged for the majority of our medicines. We are modifying prices for about 10% of our medicines, including some instances where we’re decreasing the price.”

Trump has been promising slashing the drug prices in his presidential campaign and a few weeks ago introduced his radical plan to “bring the prices back down to earth”. 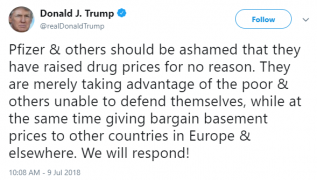 “Pfizer & others should be ashamed that they have raised drug prices for no reason,” president Trump tweeted.

“They are merely taking advantage of the poor & others unable to defend themselves, while at the same time giving bargain basement prices to other countries in Europe & elsewhere. We will respond!”

Pfizer’s shares went down by 0.3% and then quickly recovered and closed higher than the night before.

Trump also repeated an argument that foreigners are to blame for America’s high prescription-drug prices. Europeans pay too little for their drugs, so Americans make up the losses by paying more.

Insurers and pharmacy benefit managers in the US routinely negotiate with pharma companies for discounts on list prices, however, the government, by law, cannot enter such negotiations.

Regulators have been complaining about pharmaceutical prices for a long time now, but there’s no indication of any significant pending policy action aimed at regulating them, bolstering competition or offering some other potential solution to this problem.

Some experts are suggesting the idea of open drug trade with FDA, allowing foreign makers qualified to sell generic drugs in Canada, England, France and other countries to sell generics in the US.

Trump’s administration issued a long blueprint detailing his strategy a few months ago. But critics said it lacked the aggressive steps required to cut prices, such as potentially allowing Medicare to use its purchasing power to negotiate directly with drug companies.