What HCPs think about medical tweetorials

Twitter has been used by health professionals for over a decade to share medical knowledge and education. Until late-2018 they had only 140 characters to do this, increasing to 280 at that time. There have been some collaborative ways to have meaningful interactions on the platform including Twitter journal clubs. 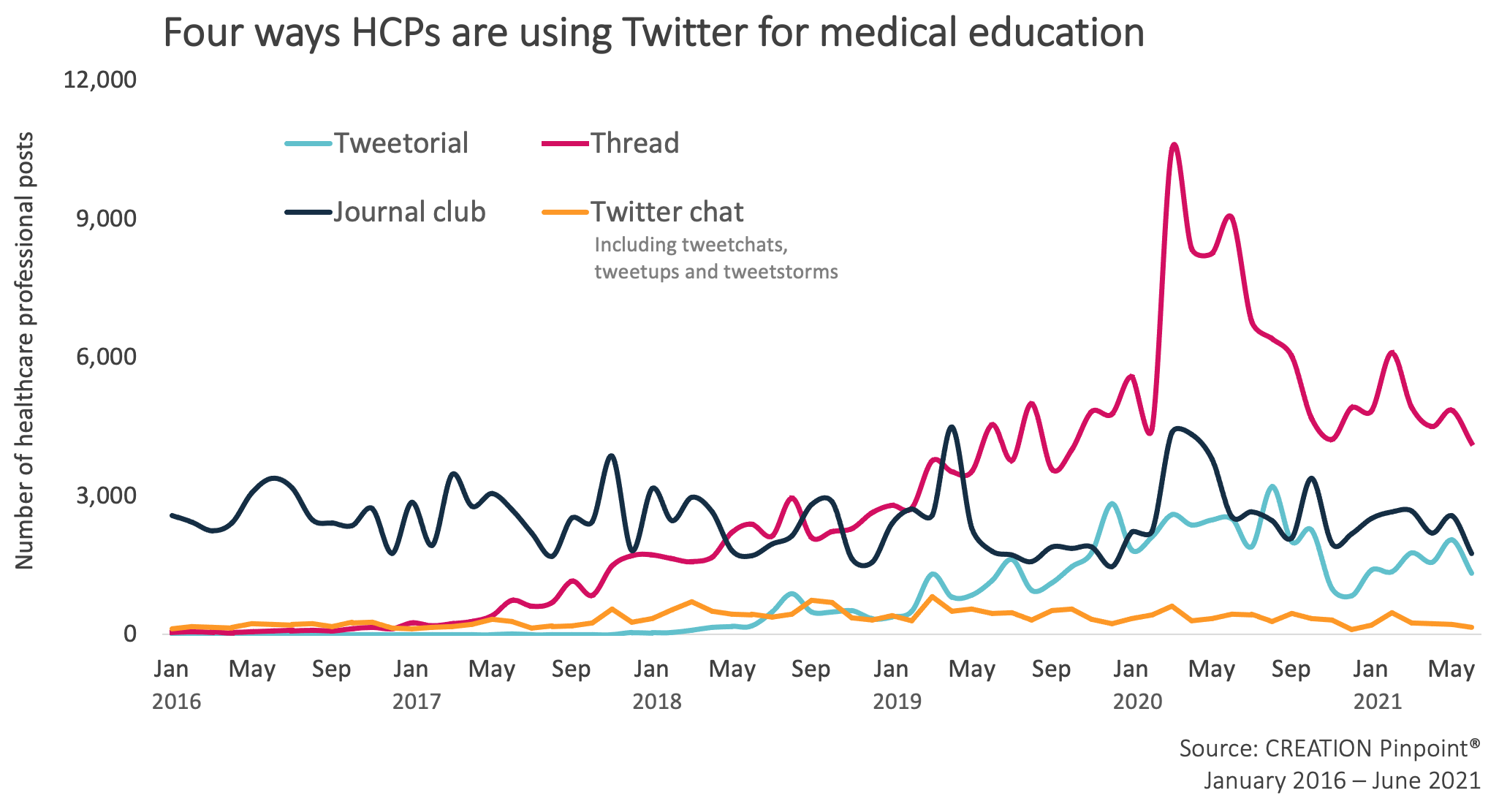 Recently we saw Twitter journal clubs such as #NephJC (Nephrology Journal Club) adopting new opportunities on Clubhouse, which is a new social networking app based on audio-chat.

Terms like tweetchat and tweetup are also used in both medical and non-medical contexts to denote the virtual gathering on Twitter. A journal club is a type of Twitter chat but with a very specific focus on a medical journal.

There are also a number of medical Twitter chats during which HCPs collaborate on issues more broadly than medical journals, such as #PancChat – a Twitter chat “developed to provide relevant, credible, and timely information to the [pancreatic cancer] community”.

Over the past few years, a new way of sharing medical education on Twitter has been seen; the thread. Threads, a Twitter feature launched in late-2017, are simply a series of connected tweets from one person.

Thread posts often start or finish with the words “a thread” or simply “thread”, sometimes indicating which post it is in the thread e.g., 3/7 being the third post in a seven-post thread. In the medical world some threads use the hashtag #MedThread (3.4% of HCP thread posts) or use either the ? or the ? emojis (2.8% of HCP thread posts).

On Twitter, online journal clubs and threads have become so commonplace they have now become the focus of academic research themselves. Looking at the engagement trend over time I am asking the question of how healthcare professionals have engaged in medical tweetorials over the past two years.

The start of the pandemic saw a big rise in threaded posts, which returned to pre-pandemic levels around October 2020. Use of medical education threads on Twitter started becoming commonplace in 2017 but the terminology “tweetorials” only followed about a year later among HCPs.

As Tony Breu, a hospitalist in Boston puts it, tweetorials are a form of threaded tweets that have emerged as a tool for medical education and knowledge dissemination. Commenting on the aforementioned character limit Amit Goyal has written it “constrains individual tweets to focused morsels, these can be threaded together as tweetorials to express complex ideas.”

Over the last 18 months, tweetorials have become much more commonplace on Twitter among HCPs. We have also seen HCPs looking to educate their peers on how to create a tweetorial including Tony Breu. 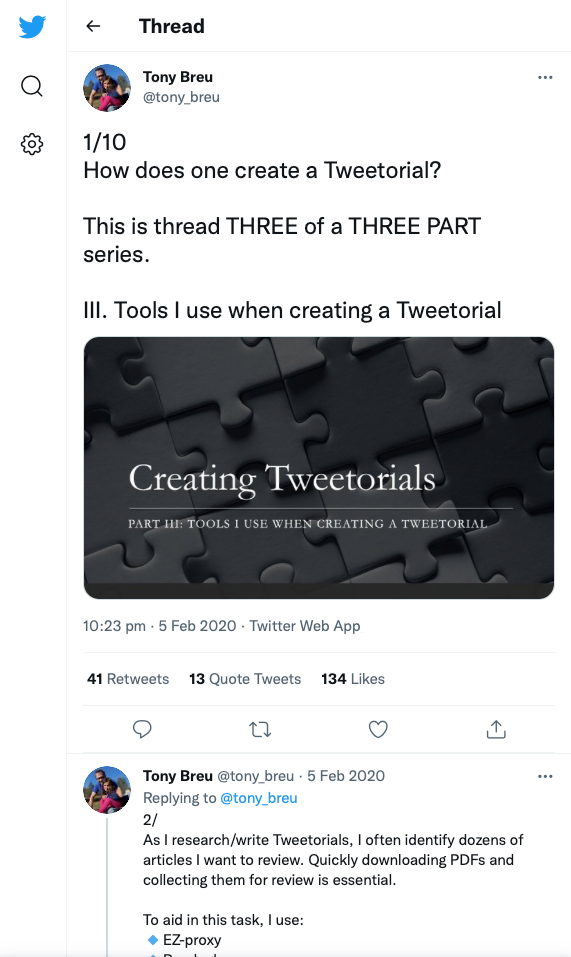 Why are HCPs creating tweetorials?

A key time when HCPs often use tweetorials is after trial results are published. In order to summarise the trial, endpoint, results and any further discussion, more than 280 characters are required.

Specialists in disease areas are sometimes seen sharing tweetorials discussing studies of new treatments. This kind of thread often engages fellow specialists or even patients. One area that has affected every healthcare professional, indeed almost every person on earth, has been the COVID-19 pandemic. When relevant tweetorials were shared at the start of the pandemic about the virus, this engaged a wider audience.

As with many subjects relating to the COVID-19 pandemic, the response was mixed in sentiment, but one user came to Karan’s defence against the naysayers demonstrating the aim of such medical tweetorials: he is “disseminating information, and doing a public service.” 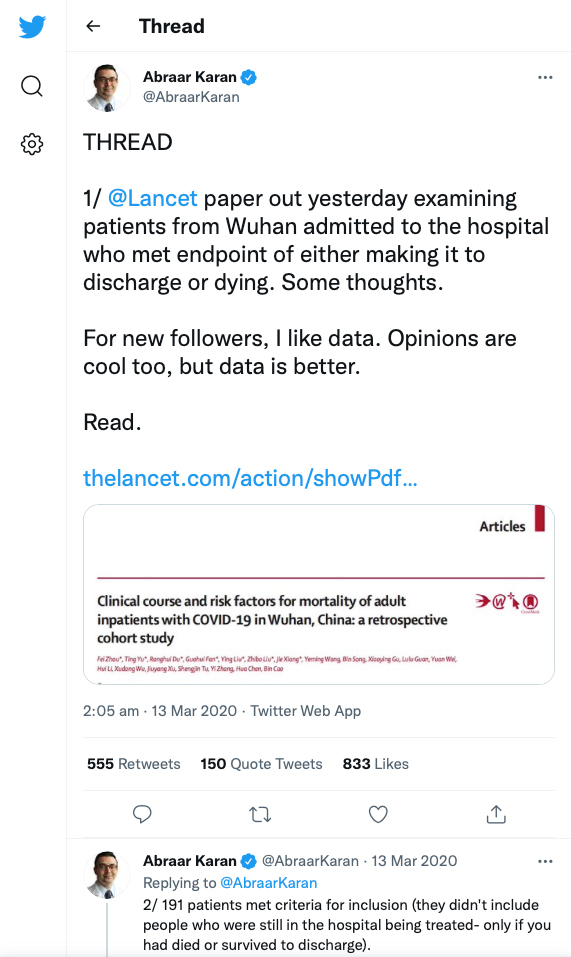 Tweetorials for medical awareness and education

As well as around trial data, tweetorials can be useful in sharing education information to raise awareness for certain disease areas. Marcela Santana, a doctor in Brazil, used the thread format to share an educational summary of the rare and less well-known disease leptospirosis. Using additional posts Santana was able to go into detail on global distribution, symptoms, diagnosis, treatment and prevention. 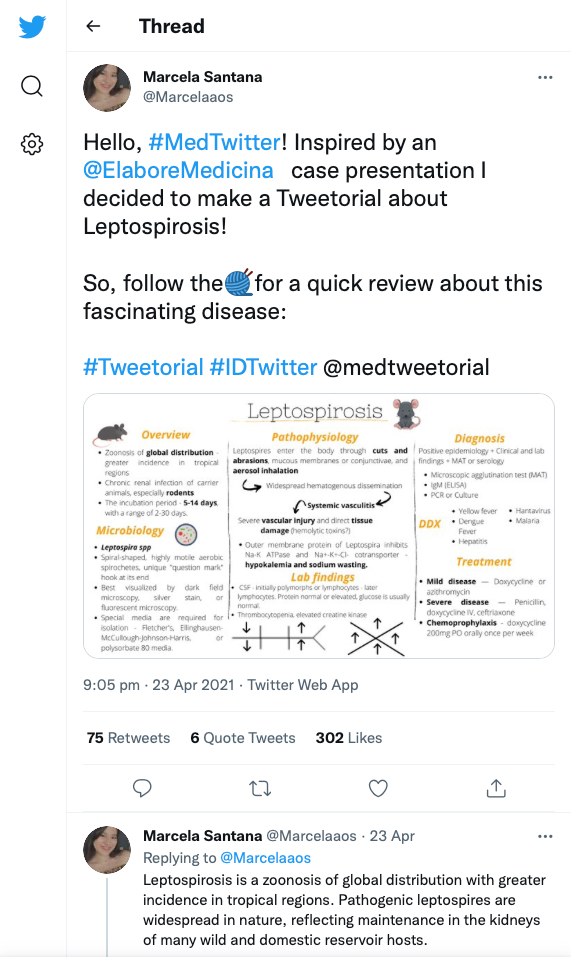 Another excellent opportunity where HCPs use tweetorials is during medical congresses. The CIRCA-DOSE Study results were discussed at European Heart Rhythm Association Congress and in order to give the objectives, design, outcomes of the trial as well as added commentary, Jason Andrade, a cardiac electrophysiologist, published a 29-post thread. Some of the tweets within the thread received a few likes and retweets but most readers chose to engage with the opening post, as seen in the hundreds of likes and retweets. 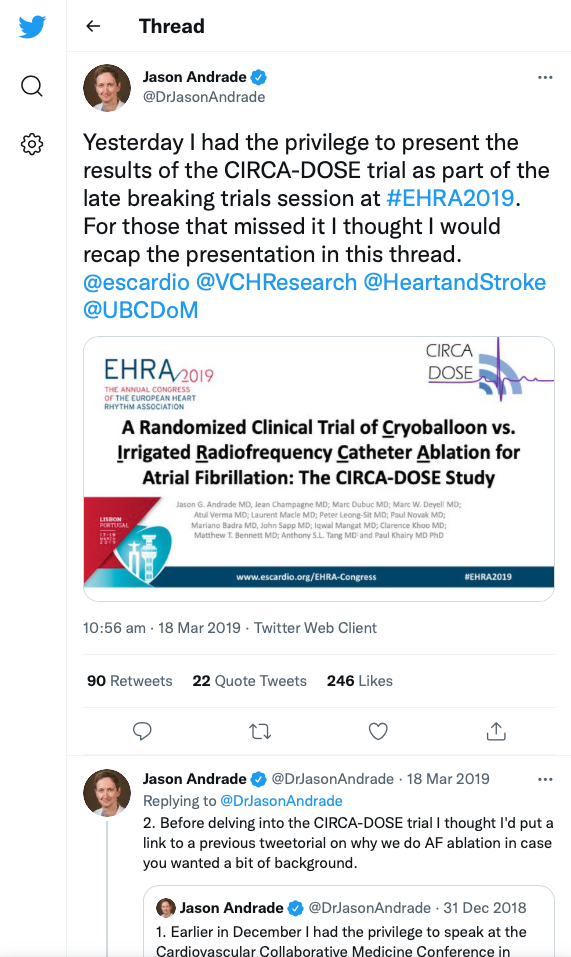 One online behaviour seen in medical tweetorials is the readers’ request to see the thread in its entirety. This is possible by commenting “@threadreaderapp unroll” on the given thread. @threadreaderapp, ‘Thread Reader App’, is a Twitter bot aimed to help users read threads more easily.

When users reply to a thread mentioning the bot and using the keyword “unroll” the bot comments returning a link to the full thread in one article. With almost half a million followers, this has become a popular way to read threads more easily or share it in its entirety when complete. 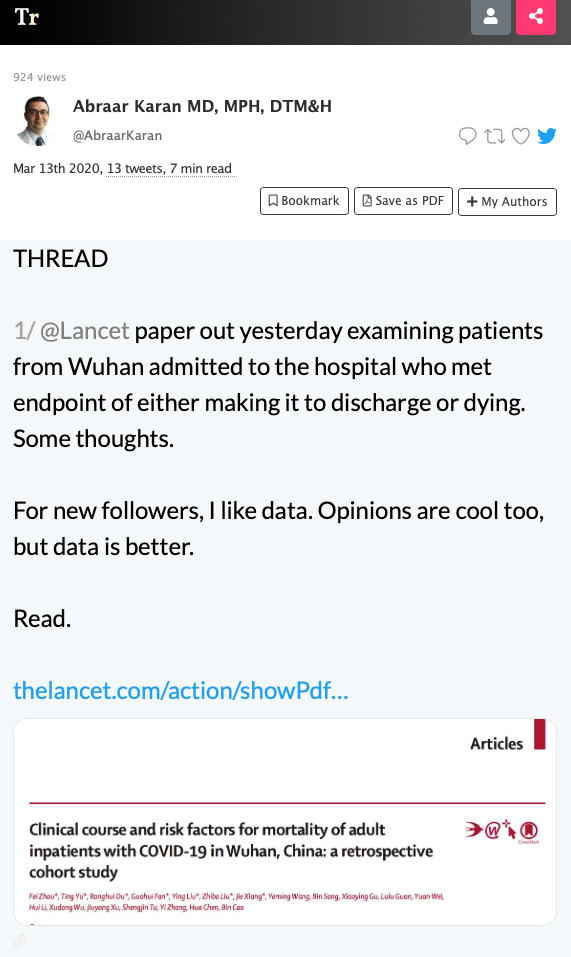 Returning to Amit Goyal’s education piece on tweetorials, he said that until recently his ‘largest audience ever taught’ was in the double digits, however the world is changing. The way HCPs can share information with geographically disconnected peers has advanced staggeringly over the last few decades with the internet and now social media. As the pandemic has driven us all into our home offices and to a greater level of digital interaction, this will only increase. We have a fantastic opportunity to find the value tweetorials are providing and enhance that for better health outcomes globally.

Jamie leads a team that discovers what healthcare professionals think by analysing their online social media conversations. He has collaborated with healthcare professionals, marketers and communicators to leverage data for health strategy, and has pioneered new research methodologies using CREATION.co’s global dataset. Research produced by Jamie and his team has informed academic articles, health policy, and product launches all over the world.