NICE says it can approve BioMarin's ultra-rare drug treatment Vimizim, but has proposed real-world data collection and a price cap to overcome doubts about the drug's value, reports Andrew McConaghie.

The move shows NICE is becoming bolder in proposing new solutions to problems caused by rare disease drugs, which can transform the health of patients, but carry a very high price tag.

The decision has also been welcomed by charity the MPS Society, which represents people with the ultra-rare condition, mucopolysaccharidosis type IVa (MPS IVa), or Morquio.

While the decision has not yet been finalised, BioMarin is thought to be in agreement with the deal. NICE's solution could be a step forward not just for people with Morquio, but could also be the shape of things to come for access to all rare disease drugs in England. 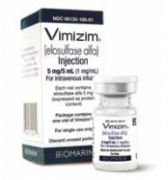 The MPS Society has welcomed NICE's draft decision, which ends 18 months of uncertainty about the drug since it first gained EU approval.

An MPS Society spokesperson said it was a "huge relief" to the Morquio community in England now that NICE is "leaning towards a 'yes'" and that it would now work with clinicians and BioMarin to meet NICE's conditions.

However the charity has expressed strong concerns about how long the decision will take to be finalised.

Morquio stunts growth in children born with the disease, squashing organs and causing severe disability. The average life expectancy is around 25 years, primarily because of respiratory failure and heart problems.

The drug is the only treatment available for the debilitating and progressive condition, and works by replacing the N-acetylgalactosamine-6-sulfatase enzyme lacking in people with the disease.

Vimizim has been at the centre of great controversy, with rows over the processes used to assess the drug. The MPS Society won a legal victory last year when a court ruled NHS England's criteria for assessing treatments was unfair. After a long consultation and delay, NHS England handed the decision back to NICE in June.

NICE will now hope it has arrived at a compromise which can allow access to the drug, generate evidence of its effectiveness, and control costs at the same time.

NICE says existing data show the drug 'improved some aspects of health compromised by the disease, and that health and quality of life improved significantly in some patients after treatment' but added that the magnitude of overall long-term benefit offered by Vimizim was 'uncertain'.

For that reason, it has proposed a number of unusual measures to ensure patients who will benefit from the drug can receive it.

This includes clear clinical criteria for stopping and starting treatment to be developed, as well as a launch of UK-specific real-world data collection, to help prove its value to patients. NICE's Highly Specialised Technology (HST) says this can all be co-ordinated through a Managed Access Agreement.

It says BioMarin should work with clinical and patient experts, and NHS England, and make arrangements to "generate evidence on the use of the drug through research and collection of 'real-world' data directly relevant to patients in the UK."

The high price of the drug, which BioMarin states is necessary to recoup its investment in such a small number of patients, is undoubtedly the biggest issue for Vimizim and other rare and ultra-rare disease treatments.

BioMarin has already offered a confidential 'patient access scheme' (PAS) discount to the £394,680 list price for the drug, but NICE has pushed for further concessions from the pharma company.

NICE has no formal role in negotiating prices, but it is increasingly making clear suggestions to stakeholders in order to arrive at a positive recommendation.

In addition to the managed access programme, NICE says BioMarin should reach agreement with NHS England on a price cap. It says they should 'set the total costs of elosulfase alfa during data collection', which, added to the (PAS) discount, NICE says will help manage financial risk.

Campaigners from the Morquio community have protested strongly about the delayed decision-making process.

Despite welcoming NICE's draft ruling, the MPS Society has expressed concern about further delays. NICE will now consult on its decision until 23 September, which will be considered by the Highly Specialised Technologies (HST) committee in October – a process which the charity fears will delay access for children and young adults who urgently need treatment.

The charity agrees with NICE's figure of 77 patients out of the 88 who are eligible for treatment – this includes ex-clinical trial patients still receiving the drug via expanded/compassionate access, but also younger children who have not yet received treatment.

Christine Lavery, chief executive of the MPS Society said: "We are relieved by the announcement from NICE HST and are working hard to complete the requested Managed Access Agreement. However, we call on David Cameron to now show compassion to the children diagnosed too late to participate in the clinical trial who are deteriorating while they wait for the final positive decision.

"Individuals with Morquio and their families have been emotionally drained by the catalogue of errors that has led to the dragging out of the decision-making process by NHS England and the changing of goals. The Morquio community have had 16 months of waiting to receive Vimizim, and the fact that we are still months from the final decision is an appalling way to treat those in our society whose health is deteriorating before their eyes."

Despite the promising signs that real-word data collection can help prove the drug's value, the overall cost to the NHS remains a concern: NICE says treating the 77 patients could cost up to £30 million a year. This cost might be considered manageable if Vimizim was an isolated case, but the drug is just one of a wave of new rare disease treatments reaching the market.

The first drug approved through the HST process was Alexion's Soliris in 2014, and the Vimizim decision has many similarities with this ruling, but the Vimizim application has been much less delayed.

NICE has gone one step further this time by explicitly calling for a real-world data collection and a price cap. This suggests NICE is creating a new model for rare disease drug access – which could gain support from stakeholders if it proves workable.

BioMarin gene therapy for haemophilia on course for EU appro...

The EMA's human medicines advisory committee has recommended that BioMarin Pharmaceutical's haemophilia A gene therapy Roctavian be approved in the EU, removing one of the last barriers to