What doctors say about Obamacare after US election

With US President-elect Donald Trump keen to repeal President Obama’s Patient Protection and Affordable Care Act, and his appointment of like-minded Tom Price to the position of Health Secretary, what are the views of frontline healthcare professionals? Daniel Ghinn has been listening to the social media conversations.

The Patient Protection and Affordable Care Act, also known as the ‘Affordable Care Act’ (ACA), or simply ‘Obamacare’, is a system of healthcare provision in the US, implemented in 2010. The controversial system, which was designed to provide better healthcare to more people at a lower cost, has been widely debated and challenged ever since President Obama introduced his ideas for US healthcare reform.

Under Obamacare, private healthcare insurers compete to offer health cover to customers who do not have plans provided by the government or their employers. The system includes government subsidies to help people buy insurance.

Ahead of last month’s US presidential election, Donald Trump talked about Obamacare’s failures, claiming it had resulted in “runaway costs … greater rationing of care, higher premiums, less competition and fewer choices” and promised to repeal Obamacare and reform the healthcare system once more.

What are healthcare professionals saying?
So with Trump as President-elect, what are those on the front lines of healthcare saying about the ACA? An analysis of 75,938 social media posts by healthcare professionals (HCPs) mentioning the Act since the US election, referring to it by its official name – the Patient Protection and Affordable Care Act – or any of its popular terms, including Obamacare, provides a glimpse of the most popular topics in their discussions. 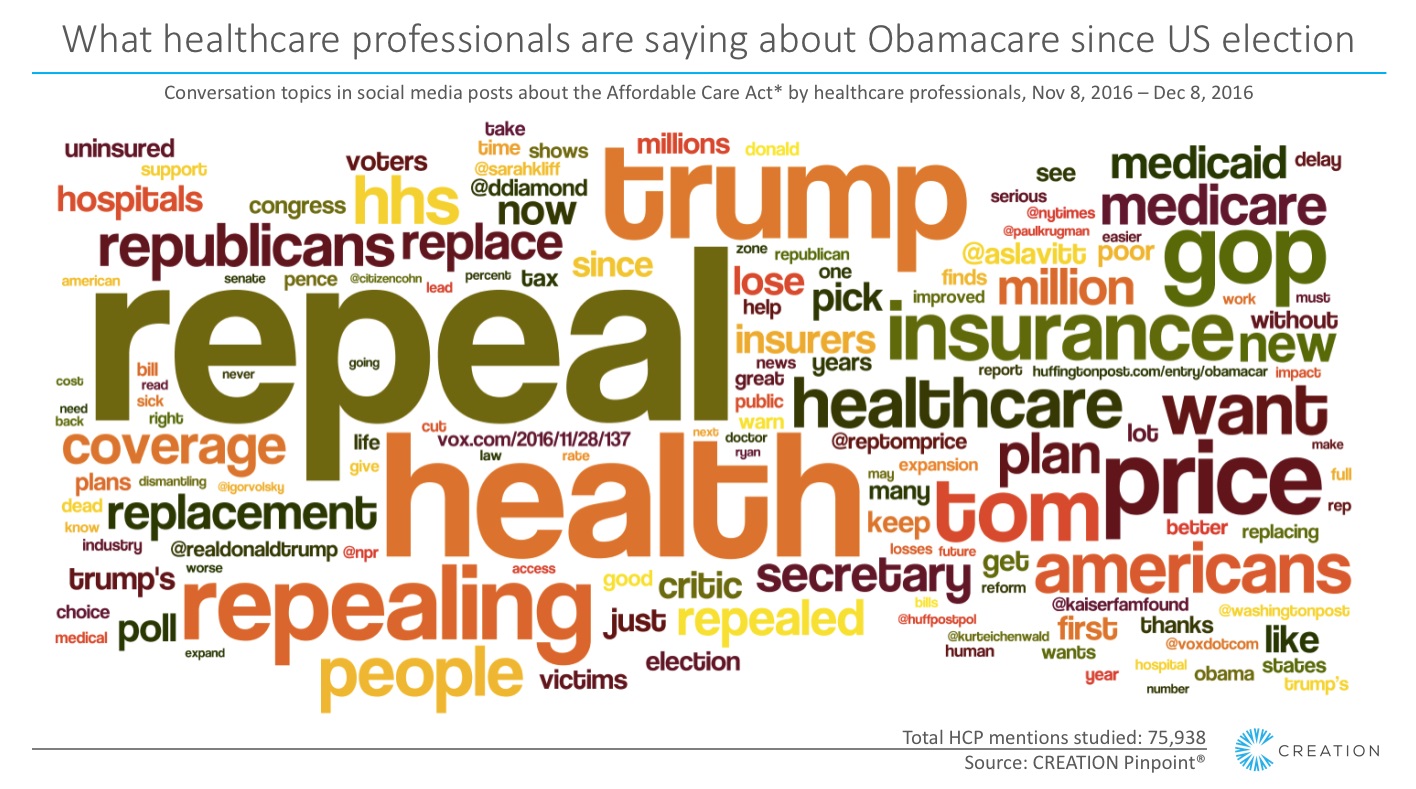 On Obamacare repeal
It is clear from the analysis that Obamacare ‘repeal’ is a hot topic among HCPs. In fact, more than 7,500 HCP posts about Obamacare refer to its repeal and the possible process, timeline and resulting impact.

Paediatrician Philip Miller was one of many physicians who reacted to a news story claiming that Obamacare repeal would take insurance from 30 million people. Citing the story posted by NBC News, Miller called it “immoral”.

Other popular ideas shared by HCPs discussing the repeal of Obamacare included extensive conversations about the possible impact on hospitals, after the American Hospital Association and Federation of American Hospitals outlined their concerns.

Dr Johnny Benjamin, an orthopaedic spine surgeon, was one of many physicians who commented on a piece claiming that the hospital industry could be “devastated” by Obamacare repeal, tweeting: “Told you. 20m uninsured don’t just go away.”

Many HCPs have been speaking about the “victims of repealing” Obamacare. New York-based primary care physician Dave Chokshi quoted a story in the New York Times when he tweeted: “I appreciate how this plainly states: The Victims of Repealing Obamacare will be the Sick and the Poor.”

I appreciate how this plainly states: The Victims of Repealing Obamacare will be the Sick and the Poor https://t.co/oNG3AfuQl4

Tom Price to dismantle ACA
When Donald Trump announced recently that former physician Tom Price would take the role of Health Secretary, HCPs reacted strongly, sharing their opinions and predictions about the future of US healthcare in the hands of this long-time ACA-opponent.

There was general agreement among doctors that the new Health Secretary would dismantle the ACA. “Make no mistake about it, President-elect Trump’s appointment of Rep. Tom Price to head the US Department of Health and Human Services guarantees sweeping changes to the Affordable Care Act, aka Obamacare, as we know it,” wrote Adam Dougherty, an emergency medicine resident physician at UC Davis Medical Center, in his blog.

“…What Tom Price plans to do: destroy the ACA,” tweeted Maxine Sun, an epidemiological and public health researcher in uro-oncology.

Disappointment
Many HCPs responded with outrage to Tom Price’s appointment. “Another terrible pick: Tom Price, who has planned how to repeal ACA for six years, is Trump’s Choice for Health Secretary,” tweeted trauma centre doctor Margaret Stuart, MD in response to a New York Times article.

“This makes me ill,” reacted Josephine Ensign, a nurse who blogs on policy and nursing.

A need for review
Not all HCPs joined the condemnation of Tom Price’s appointment. Dr Nicole Saphier, oncologic radiologist at Memorial Sloan Kettering Cancer Center, defended Mr Price when she quoted an article describing him as, “Tom Price a man of definitive ideology [with] a goal of improving doctor-patient relationships.”

Dr Saphier also shared an interview with Mayo Clinic CEO, John Noseworthy, MD, which stated that the hospital group’s CEO felt that “healthcare professionals aren’t ‘freaking out’ about how Trump’s policies could affect them” but recommended “a cautious, ‘surgical’ approach to replacing the ACA.”

In an interview with Fox News, Saphier said that the ACA had resulted in lower quality of care since 20 million newly-insured patients were seeing doctors at a time when fewer doctors were being hired due to the cost of implementing the ACA: “We’re in the midst of a physician shortage crisis, and physician burnout’s at an all-time high.

“We need to focus on the strengths that the ACA has provided us, which is increased coverage; inclusion of patients with pre-existing conditions; and keeping our children on our healthcare plans until the age of 26,” she said, adding that she believed doctors should be included in the discussion about the future of the ACA.

Learning from the conversation
Every side of the Obamacare debate in the US has passionate feelings about its future, perhaps at times affected by deeply-held political views. If the daily lives and effectiveness of HCPs are affected by health systems, surely their views are relevant to any dialogue about the future of care.

While the world watches the US healthcare system with anticipation, we will learn from the ongoing commentary of HCPs on its front lines. If we listen, then the lessons we learn could shape patient care and the lives of doctors well beyond the shores of the US.

Daniel Ghinn is CEO of CREATION, the HCP online insights specialist and has been advising pharma and healthcare organisations for more than two decades. He tweets at @creationdaniel.

What doctors say about EpiPen pricing