Digital fabric could be used to measure health data

Researchers in the US have developed a wearable fabric that can sense, store and analyse data that could be used to measure physiological functions or detect illness.

The team from Massachusetts Institute of Technology (MIT) claim this is the first example of a fabric which can record data in a digital rather than in an analogue format, allowing it to be programmed like any other digital device.

That means fabric made using the material could be deployed for applications in physiological monitoring, human-computer interfaces, and on-body machine-learning – all of which raise intriguing possibilities for digital health applications. 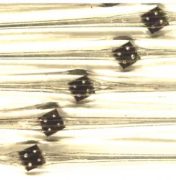 The fibre was created by placing hundreds of square silicon microscale digital chips into a preform that was then used to create a flexible, polymer thread, thin and flexible enough to be worked using a needle into fabrics.

“When you put it into a shirt, you can’t feel it at all,” MIT PhD student Gabriel Loke, one of the lead authors on the paper along with MIT postdoc Tural Khudiyev, in a statement posted on the MIT website. “You wouldn’t know it was there.”

When incorporated within the armpit of a shirt, the fabric collected and stored body temperature data over multiple days and allowed the researchers monitor wearer activity in real time.

The digital fibre collected 270 minutes of body temperature data. By using a trained neural network to analyse changes temperature – increases during physical activity for example and falls due to evaporation of sweat afterwards – the system was able to infer with an accuracy of 96%  the activity that the wearer was engaged in.

The fibres can be washed at least 10 times without breaking down, according to the scientists, who have published their work in Nature Communications.

With this analytic power, the fibres someday could sense and alert people in real-time to health changes like a respiratory decline or an irregular heartbeat, and store the data for weeks.

“This type of fabric could give quantity and quality open-source data for extracting out new body patterns that we did not know about before,” said Loke.

At the moment the fibre is controlled by a small external device, so the next step will be to design a microcontroller chip that can be incorporated within the fibre itself.

“When we can do that, we can call it a fibre computer,” said Loke.