The use of consistent terminology within and between studies is critical to enabling an efficient trial process. CDISC standards such as CDASH, SDTM, SEND and ADaM standardize the structures to use when collecting and submitting data, but what about the data values themselves?

This article gives an overview of CDISC’s standardized controlled terminology and how it should be used to collect and submit data in a way that speeds up trials and enables cross-study analysis.

If you’re interested in reading more about CDISC standards you can read our blogs All you need to know about SDTM and Introduction to CDISC standards.

In days gone by this information may have been collected in different ways for each study. The CDISC NCI Terminology standard now defines that the only allowable options are “F”, “M”, “U” and “UNDIFFERENTIATED”, and that a person who is intersex should be recorded as “UNDIFFERENTIATED”. You can see how this very simple example already makes it much easier to understand the underlying data and easily segment for different populations across studies.

How is CDISC NCI Terminology defined?

The table below shows how the standard Sex terminology is defined. 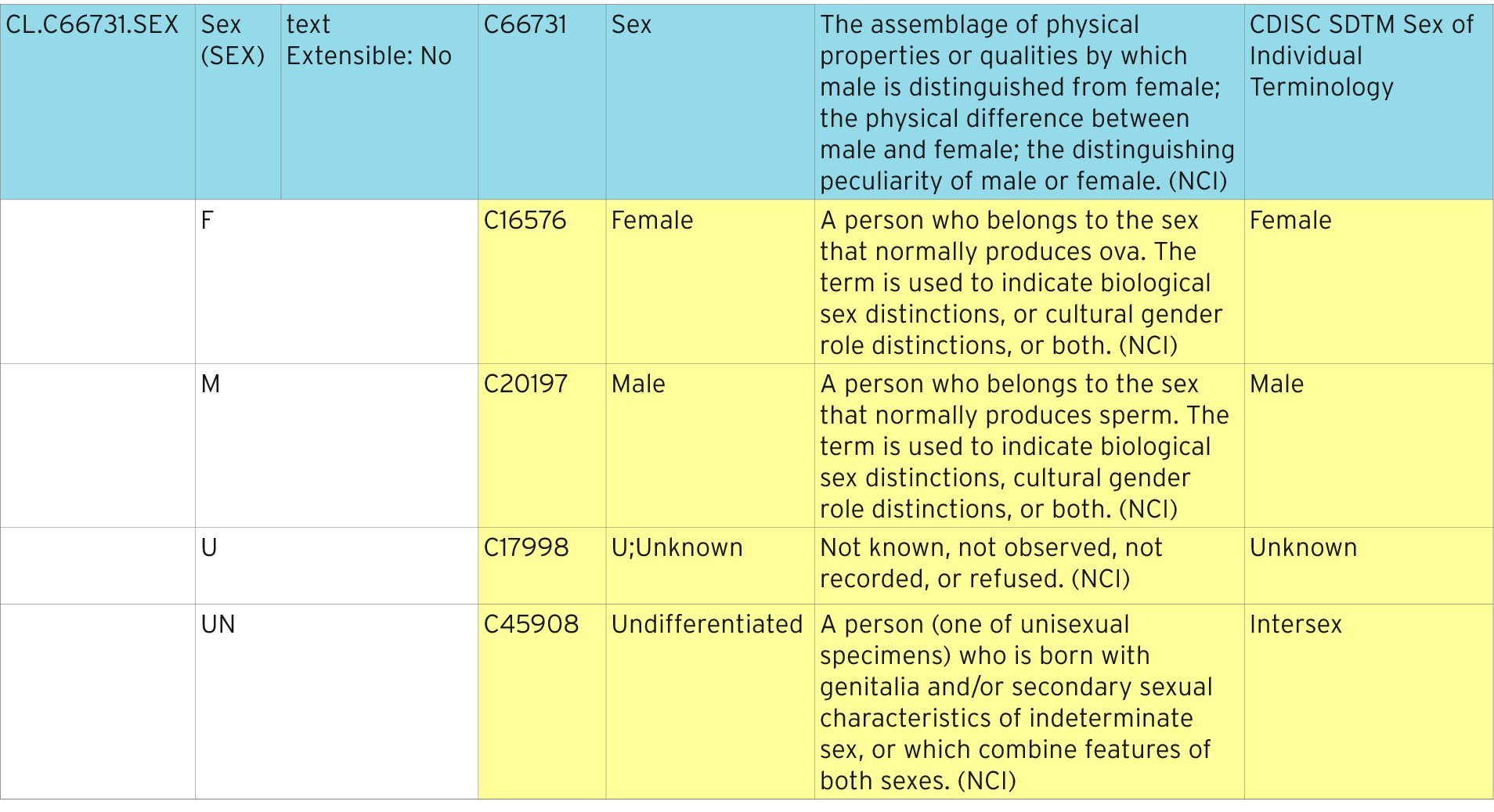 This codelist is defined as being non-extensible, which means that wherever the codelist is used it must not contain any terms not listed here. Code lists that are extensible can have additional terms added. These additional terms must be described in Define-XML as being extended terms and cannot be duplicated or synonyms of existing terms.

The submission value is what must be submitted to a regulator. The value actually displayed on a form may be different, and may be one of the Synonyms or the Preferred Term.

Available in many colors

The NCI Terminology standards are available in a number of formats to suit different needs, including Excel, ODM, HTML, and RDF. The example above is taken from the Excel version.

Grouped into subsets for CDASH, SDTM, ADaM and more

For convenience, the NCI Terminology is grouped into a number of subsets.

When defining data collection metadata in ODM there is no requirement to use the standardized terminology, however, doing so will remove the need to map terms from your collected data to your submitted data. This greatly simplifies your end-to-end study process and increases consistency between studies.

Managing terminology updates can be a significant amount of work, particularly with the standards being updated so regularly. How do you know what studies or organizational standards might be affected by new terminology?  How do you then make the required updates in an efficient, reliable manner?

The easiest way to manage this is by using a CDISC-aware metadata repository that allows you to define organizational standards built upon the standardized terminology, and build your studies from those standards. As the repository understands the relationships between all the standards and your studies, it can simplify the process of updating to new versions of the CDISC NCI Terminology standards.

Once your standardized datasets have been defined, you should generate a Define-XML that describes the datasets including references to the standardized terminologies. You can then run a compliance check to verify your dataset designs against the NCI terminology.

Decentralised trials: beyond the pandemic