Health secretary Jeremy Hunt has broken away from the long-standing government policy on NHS funding, calling for a 10 year funding settlement for the health service.

He added that ministers needed to be open to the idea of “innovative forms of taxation” in order to end the “feast and famine” funding of the NHS over the last 20 years.

In private, Hunt has grown frustrated at the limitations on NHS funding set by the Treasury and Chancellor Philip Hammond, but his appearance on ITV’s Peston on Sunday politics programme yesterday marks a more outspoken, bolder approach from the health secretary.

Saying it was too early to speculate that a £4 billion annual increase would be unveiled, Hunt nevertheless stressed that extra funding was desperately needed.

“There’s no doubt that NHS staff right now are working unbelievably hard and they need to have some hope for the future, but their real concern is this rather crazy way that we have been funding the NHS over the last 20 years, which has basically been feast or famine.”

One of the most acute problems in the NHS is the rising levels of staff vacancies, and last week the government agreed a significant pay rise for more than one million health service workers.

Nurses, porters and parademics are among staff who have had a pay freeze since 2010, and the government last week agreed a 6.5% pay increase over three years.

The deal has now been formally agreed by union leaders and ministers and will cost £4.2bn. This sum will be funded directly by the Treasury, and won’t come out of NHS budgets.

In his television appearance and in an interview with The Mail on Sunday, Hunt raised the idea of a ringfenced fund for health and social care. 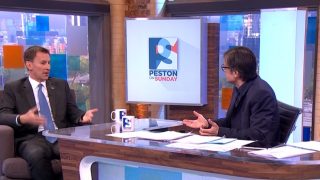 Nevertheless Mr Hunt knows that ringfence taxes are rarely popular with the Treasury, as they limit its spending flexibility and make it more difficult to performance manage public services.

“The Treasury do not like it because it takes it out of their hands,” he said.

Responding to the health secretary’s remarks, Chris Ham, chief executive of the King’s Fund think tank told The Times newspaper that a 10 year NHS budget would be welcome.

However he stressed that social care funding would need at least £2.5 billion to prevent frail elderly people remaining in hospitals because they have no social care arrangements.

Professor Ham said the change in tone from the government was in response to a “growing sense of crisis” in the NHS.

“We’re coming out of a winter in which the NHS prepared early and prepared well, yet still things have been very difficult, with doctors talking about patients dying avoidably,” he told The Times.

The King’s Fund and others estimate that the NHS faces a £20 billion funding gap by 2022/23, thanks to ageing population placing greater demands on services. Spending in 2017-18 was £124 billion.

Mr Hunt’s intervention shows that he is aligned with Simon Stevens, the chief executive of NHS England. Mr Stevens broke ranks in November last year, demanding that the sums promised by the Vote Leave in the Brexit referendum of 2016 – £350 million a week – should be given to the NHS.

This would amount to £18 billion a year, but in the end Stevens asked for just asked £4 bn extra a year – and then saw the Chancellor give just half of that in his autumn budget.

Mr Stevens was said to have angered the Prime Minister’s office by his outspoken remarks, but Jeremy Hunt’s comments suggest that Downing Street is coming round to this point of view.

This change of policy is likely to be driven by the mood in the country, where a British Social Attitudes poll last month showed a sharp decline in public satisfaction with the NHS, reaching its lowest in 30 years.

Another poll, conducted by Ipsos Mori and the King’s Fund in September last year suggested that two thirds of respondents would be willing to pay higher taxes to fund the NHS.

An increase in funding would also be very much welcomed by the UK pharmaceutical industry, which is seeing funding for new medicines being squeezed and subjected to a new Budget Impact Test.

During the UK's general election campaign in April 2017, the industry's ABPI campaigned for the country to increase its spending from 9.9% of GDP to to 11.3%, putting it more in line with other G7 nations.

Alnylam's gene-silencing drug Amvuttra has been recommended as a treatment for hereditary transthyretin-related (ATTR) amyloidosis by NICE, paving the way for the drug to be made available