Abbott’s RealTime ZIKA blood test has become the first to receive FDA approval for use in an emergency use setting.

The decision expands the device’s existing emergency use approval to identify Zika virus from serum, plasma and urine samples.

Recent research has indicated that detecting Zika virus could be better achieved from whole blood samples, as the virus tends to be present at higher levels and for longer in this medium, compared to serum and urine samples.

The test can also distinguish Zika from other viruses, including dengue and chikungunya – both of which are common viral infections in areas where Zika is also prevalent. 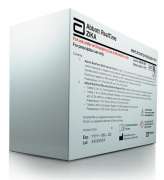 “Diagnosing a Zika infection can be challenging, especially since people might not have any symptoms or only have mild symptoms that last a few days,” said John Hackett, divisional vice president, applied research and technology, Diagnostics Products at Abbott. “Abbott’s molecular test may provide the ability to identify the active virus over a longer time-period with whole blood and could provide a more accurate diagnosis.”

Abbott’s RealTime ZIKA test is designed for use with the company’s m2000 RealTime system – a fully-automated device that delivers potential diagnoses within five to seven hours.

The FDA approval is the first of potentially three relating to tools Abbott is developing for the US government. A second project, in co-operation with the US Defense Advanced Research Projects Agency (DARPA), is looking to develop a testing panel for multiple tropical fever pathogens, including Zika, for use as a mobile testing platform in rural and remote areas, whilst a third involves the development of a serology test for tropical diseases that does not cross-react. The latter project is being funded by a grant from the US Agency for International Development (USAID).

Despite media coverage slowing down in recent months, Zika remains a significant public health issue. According to the World Health Organization, the virus affects more than 4,800 people who live in the US and more than 35,000 people who reside in US territories (mainly in Puerto Rico).

Can your typing patterns reveal if you have Alzheimer’s?