Biosimilar onslaught will slow Roche down in 2018

Roche has recorded a successful full year 2017, with sales driven by MS drug Ocrevus and cancer treatments Tecentriq, Perjeta and Alecensa, helping it to boost overall sales by 5% to CHF 53.4 billion ($57bn).

However growth is set to slow this year as it faces growing erosion of its older cancer blockbusters in Europe and the US, with revenues expected to be in the low single digit range.

Avastin, MabThera/Rituxan and Herceptin will all face an onslaught from biosimilars in Europe, with new US biosimilars of Rituxan also expected to cut its revenues.

Analysts at JP Morgan forecast that Herceptin will see a 9% decline to CHF 6.2bn in 2018 while Rituxan is expected to shrink by 16% to CHF 6.1bn.

This attack on its biggest earners has led to Roche forecasting revenue growth in the low single digit range, shrinking back from 2017’s performance. 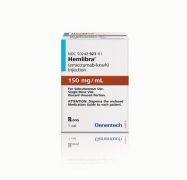 Roche has several major readouts from late-stage trials in the first nine months of the year. One of its high points from 2017 was the launch of blockbuster-tipped haemophilia treatment Hemlibra, and its HAVEN 3 Phase 3 data, due in May 2018, is expected to confirm its superiority over existing drugs.

Analysts believe Roche could stake a claim to a significant portion of the first line NSCLC market, which is worth around $12bn, close behind the current frontrunner, Merck’s Keytruda.

Analysts say Roche is the European pharma company with the biggest cash reserves for potential M&A. It has the firepower to spend up to $54bn, well ahead of Sanofi with $29bn (which has already begun to spent significantly on M&A) Novo with $28bn (which has just missed out) and Novartis with $21bn.

However Roche’s CEO Severin Schwan looks confident of driving performance through organic growth of its portfolio, with bolt-on M&A where an opportunity arises.

The company has also declared that it, like US peers such as Pfizer and Eli Lilly, will benefit from the recent US corporate tax changes. The company says its US tax rate is set to fall from 26.6% last year to the low 20s in 2018.

Less encouraging was the revelation that Roche has cut a phase 3 asset from its pipeline –  RG7417 lampalizumab, which was in development for uses in macular degeneration (AMD) as well as three candidates in phase 1.