Living with LHON: Adapting to sight loss at 15 years old

When faced with a devastating diagnosis, a family has two choices – to give up or make it their mission to adapt and carry on.

Ana Velosa’s son Tomás, who was diagnosed with the rare genetic sight-loss condition Leber’s hereditary optic neuropathy (LHON) at just 15, chose the latter. And she couldn’t be prouder of all he has achieved.

We speak to Ana about the lack of disease education and psychosocial support for people with LHON in her native Portugal, and why Tomás is her hero.

Life must go on

Tomás was enjoying a family holiday, in August 2016, when he first started to experience symptoms of LHON. At the time, his blurred vision and difficulty focusing the right eye were chalked up to tiredness.

But when the problem continued back home, Ana took Tomás to see an optometrist, and that is where the journey began.

“We thought he may need glasses – we never thought it would be more complicated than that,” said Ana.

The optometrist said there was no lens that would fix the problem. On the advice of a paediatrician friend, Tomás went to hospital where he was admitted with suspected intercranial pressure.

Ana explained: “They mentioned many possible conditions. First, they said that it may be a tumour, in his brain. Then that it may be some bacterial or viral disease and they gave him medication for that.

“They also mentioned MS, but there was nothing concrete. It was only towards the end of his hospital stay that they started to mention the possibility of LHON. 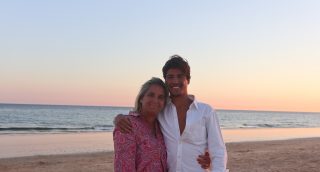 “But we were still far from realising what was happening – that he was going to lose his central vision.”

On 20 September 2016, a little over a month after first experiencing symptoms, Tomás was diagnosed with LHON.

The rare genetic disease is passed down the maternal line and affects around two in every 10,000 people in Europe. The eye condition tends to leave sufferers reliant on their peripheral vision within months of the onset of symptoms.

This is what happened to Tomás, who, within four months of that family holiday, had completely lost his central vision.

Ana, who was not aware that she carried the faulty gene that leads to LHON, said: “This is a process similar to loss. In his case, it was a loss of his vision.

“He still has his peripheral vision, so is able to walk on the street and orientate himself, but he is not totally autonomous. As parents, we feel that loss as well and it is not easy to deal with. We also have a feeling of impotence because it is incurable.”

The diagnosis was made just as Tomás was moving into his second year of secondary school, but he hasn’t let it hold him back.

It took some time for him and his family to adapt to this new reality, but Tomás is now at university studying business management.

Ana said: “It demands a certain amount of time to accept, but he is doing it with a great deal of courage and valour. He really has the will to overcome it.”

But that’s not to say it has been easy.

The Velosa family is extremely grateful that Tomás’ diagnosis was made relatively quickly, thanks to the specialists based at their local hospital.

Sadly, this is not the case for everyone facing LHON in Portugal.

“We were extremely lucky,” said Ana, “not all doctors are qualified to diagnose this type of thing.

“Many physicians have no knowledge of this condition particularly in ophthalmology, which is where people will normally go if their children can’t see well. You won’t go to a neuro-ophthalmologist.”

To prevent delayed diagnosis, the country is in desperate need of an LHON referral centre, she said.

Staffed by specialist physicians, it would see patients and doctors collaborate with similar units and researchers around the world, as well as offer healthcare professional education.

“It would make diagnosis easier and would be a great step towards helping patients.”

“There is a lack of practical help in everyday life. The hospitals are not equipped to offer that help. It means that in terms of practical matters, such as technological solutions, we need to find these ourselves,” Ana said.

“Help from those support services, such as social workers and psychologists is absolutely essential to offer real support to patients and their families.”

It’s not just medical support that is lacking. The country does not have an LHON patient support organisation and disease education and information in its native tongue is thin on the ground.

“We feel more loneliness, because it is a rare disease and there is little information. As far as I know, there is no information in Portuguese.

“What we have read was written and translated by doctors and other researchers from abroad.”

A dedicated patient advocacy group would have the potential to transform the experiences of people living with LHON and their families by offering services such as peer support, she believes.

“We would be able to share experiences, ideas and feelings, thus reducing the feeling of loneliness,” said Ana.

“It may be easier to access European and worldwide congresses to keep more up-to-date with research, be able to exchange information about practical aspects of life, and even put some pressure on the State to obtain better financial support.”

It would also work to fight the stigma attached to the condition and help people living with LHON feel more included in society.

“There are still a lot of preconceptions and ignorance in our society towards people with a rare disease or disability.

“Inclusion is what places people in a position of equality with others,” Ana said.

This can be achieved by making specific adaptations that allow individuals to participate in social, academic or professional life.

Such adaptations have been a big part of Tomás’ success story. At school, a special status granted by the Portuguese Ministry of Education gave him extra time in lessons and allowed exam conditions to be adapted to his needs.

Tomás has also utilised technical solutions, such as a mobile phone with a higher resolution and writing using computer hardware and software rather than with pen and paper.

His university is also working with him to offer specific adaptations that allow him to be included and integrated into the course and student life.

Crucially, Tomás’ attitude, determination and perseverance have been the keys to his success.

“He is very special, a true and marvellous hero. He never gave up. He makes a huge effort to keep studying and is doing the best he can at university,” said Ana.

“It is our son who takes us by the hand. He is the one who has demonstrated that he does not want to stop, that he is not giving up and that life has to go on.”

Tackling the unmet medical, psychosocial and support needs of Portugal’s LHON community would help even more people follow his example and achieve their dreams.

To read further articles in this series please visit our Disease Spotlight: LHON channel produced by pharmaphorum in conjunction with Santhera Pharmaceuticals 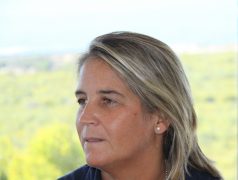 Ana Velosa holds a Law degree from Universidade Clássica She is married and has 4 children (one of them is an LHON patient). Ana founded, with 4 friends, “Plataforma Pensar & Debater” a non-profit association based in Portugal, which aims to defend values such as human dignity, family and bioethical matters.