Tunnah’s musings: Hope over hype for pharma in patient centricity, multichannel and beyond the pill

After a year of high expectations, some disappointment and dramatic change, Paul Tunnah muses on three areas where the pharma industry will advance in 2017 as it looks beyond the hype.

Well it’s been quite a year, hasn’t it?

As we come to the end of 2016 I am sure that everyone reading this has their own unique highs and lows to reflect on from the last 12 months – as pharmaphorum has grown rapidly this year I know I do!

But beyond our own individual lives there have been some tumultuous changes at the macro level. Two of the biggest events have to be the upheaval caused by Brexit in the UK and the election of Donald Trump as the 45th President of the United States of America. Without taking sides and getting political, you could argue that both shared an enormous amount of hype and spin around their respective campaigns, often, sadly, not reflecting the facts.

Despite thinking of ourselves as rational human beings, we are all affected by hype, leading us to raise our expectations and sometimes ignore what is plainly obvious when you look ‘behind the curtain’. It happens to whole industries, as well as people. This led Gartner to develop something called the ‘Hype Cycle’, originally in response to over-hyped new technologies, but applicable much more broadly.

In the pharma industry, I have observed three areas rife with hype over the last few years, all of which I believe pharma companies will take more seriously in 2017, making genuine progress as the industry moves from the ‘peak of inflated expectations’ or ‘trough of disillusionment’ to the ‘slope of enlightenment’ and perhaps even the ‘plateau of productivity’.

The names for these areas are ‘buzzwords’ in their own right, signifying the level of hype that has existed around them – ‘patient centricity’, ‘multichannel’ and ‘beyond the pill’. 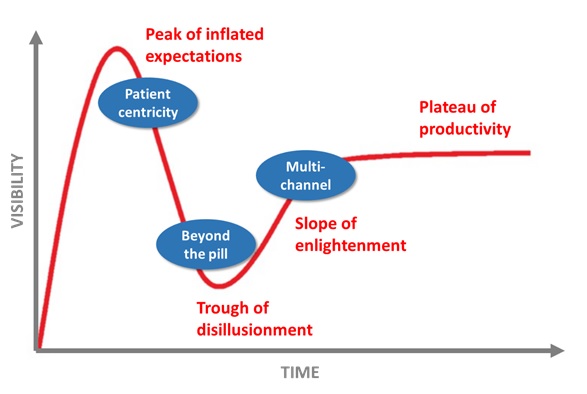 The Gartner Hype Cycle and the current stage for three core focus areas for pharma.

Patient centricity sits earliest in the hype cycle. It seems like all pharma companies are trying to shout the most about how ‘patient centric’ they are – how everything they do is about patients – and roles with ‘patient’ in the title are springing up all over the place.

Let me be clear – this is a good start. But if you then ask these organisations to explain why patient engagement is commercially beneficial, and therefore sustainable, things get a bit murkier. It’s almost like the hype, and associated good PR from being ‘patient centric’, is obscuring a proper understanding of how carefully-planned patient engagement is good for the industry, health systems and patients.

There are myriad reasons why patient engagement goes beyond positive reputational impact, and 2017 will be the year when patient centricity, entering the trough of disillusionment, will force pharma to think about it more strategically, ultimately emerging stronger.

On to our old friend ‘multichannel’, a buzzword that feels like has been around forever. But what has it actually delivered? As digital engagement has grown, it has come to idealise all the clever ways we can reach customers online at a fraction of the cost of traditional physical engagement, while capturing much more data and personalising every interaction to make physicians and payers feel loved.

But multichannel has undoubtedly fallen into the classic traps of the Gartner Hype Cycle – the pharma industry became so obsessed with the technologies themselves and feedback data they could provide that it often ended up measuring the wrong things and forgetting what good quality engagement really looks like.

Put yourself in the customers’ shoes and, if multichannel did mean anything, it would mean integrating on- and offline channels to tell a consistent story. As multichannel finally rises up the slope of enlightenment, 2017 may be the year when it stops meaning ‘digital’ and starts firmly moving pharma communications and marketing forward in an integrated way around the customer.

‘Beyond the pill’ has had a rough time recently. What it should mean is harnessing technology and services in a smart and coordinated way around medicines to ensure they deliver maximum value in the real-world and, as much as possible, negate any disadvantage from clinical studies poorly representing this beyond the clinic environment.

What it has meant in recent years, though, is companies spending enormous amounts of money on building websites and apps, many of which have delivered very little benefit. Pharma companies are experts in developing medicines, not technology, which is why beyond-the-pill programmes have often ended up in the trough of disillusionment.

There is, however, hope – in the form of pharma realising it needs to partner with those who are experts here to allow a productive convergence of technology, data and medicine. This, in combination with a more B2C mentality around understanding the real issues and co-creating solutions, will mean that the industry will start building more meaningful non-medical support in 2017. If you want to see how this is starting to happen, just check out the many company digital accelerators and innovation and partnership events now springing up.

So, as ever, I end the year on an optimistic note. It’s easy to criticise, but you cannot progress without making a few mistakes. In 2017, I think we will see the lessons from these areas come to the fore as patient centricity becomes meaningful and sustainable, multichannel creates better customer engagement experiences and beyond the pill starts to deliver more holistic solutions that really help patients achieve better outcomes with medicines.

Until next year, have an amazing Christmas and New Year and, of course, stay well.

Paul Tunnah is CEO & Founder of pharmaphorum media, which drives better communication, connection and collaboration between the pharmaceutical industry and other healthcare stakeholders. Its suite of services, from publishing (www.pharmaphorum.com) to its healthcare engagement agency (www.pharmaphorumconnect.com) are underpinned by the common strengths of extensive global networks, a firm finger on the pulse of changing market dynamics and deep expertise in creating engaging, relevant media.

Have your say: Will patient centricity, multichannel and beyond the pill succeed in 2017?

Eisai steps up beyond-the-pill approach to dementia in Japan

Multichannel, you’ve been doing it wrong