The age of the bacteriophage

Bacteriophages have been known for a century and used therapeutically for almost as long, but their relevance to today’s pharmaceutical industry could scarcely be greater. As viruses that infect bacteria they’re ‘the enemy of our enemy’, potential weapons in the fight against antibiotic resistance. As relatively simple biological machines, they’re a prime tool for biotechnologists to harness to reveal disease secrets and devise new methods.

In particular, companies exploit bacteriophages to make synthetic human monoclonal antibodies like AbbVie’s Humira (adalimumab), one of the top-selling drugs of 2013. It was fitting, then, that the phage display process through which Humira was discovered kicked off the ‘Exploiting bacteriophages for bioscience, biotechnology and medicine‘ at the O2 Arena, London on January 23, 2014.

“Bacteriophages have been known for a century and used therapeutically for almost as long, but their relevance to today’s pharmaceutical industry could scarcely be greater.”

Phage display’s power rests in the ability to clone genes for single chain variable fragment (scFv) antibody peptides into bacteriophages, which then express the scFvs on their surfaces. Used combinatorially, pairing each of thousands of antibody light and heavy chain structures with each other, it gives millions or billions of phages for screening against a desired target.

The approach’s versatility, “from bench to bedside” shone through decades of research done by Kerry Chester’s team at University College London. They had first used it to develop a radiolabelled anti-carcinoembryonic antigen antibody which became a “valuable and practical” clinical cancer imaging tool to guide surgery. They’re now using a similar approach to target avβ6 integrin, present in cancer tissues and wounds but not healthy tissues, using dimeric ‘diabody’ antibodies rather than scFvs. 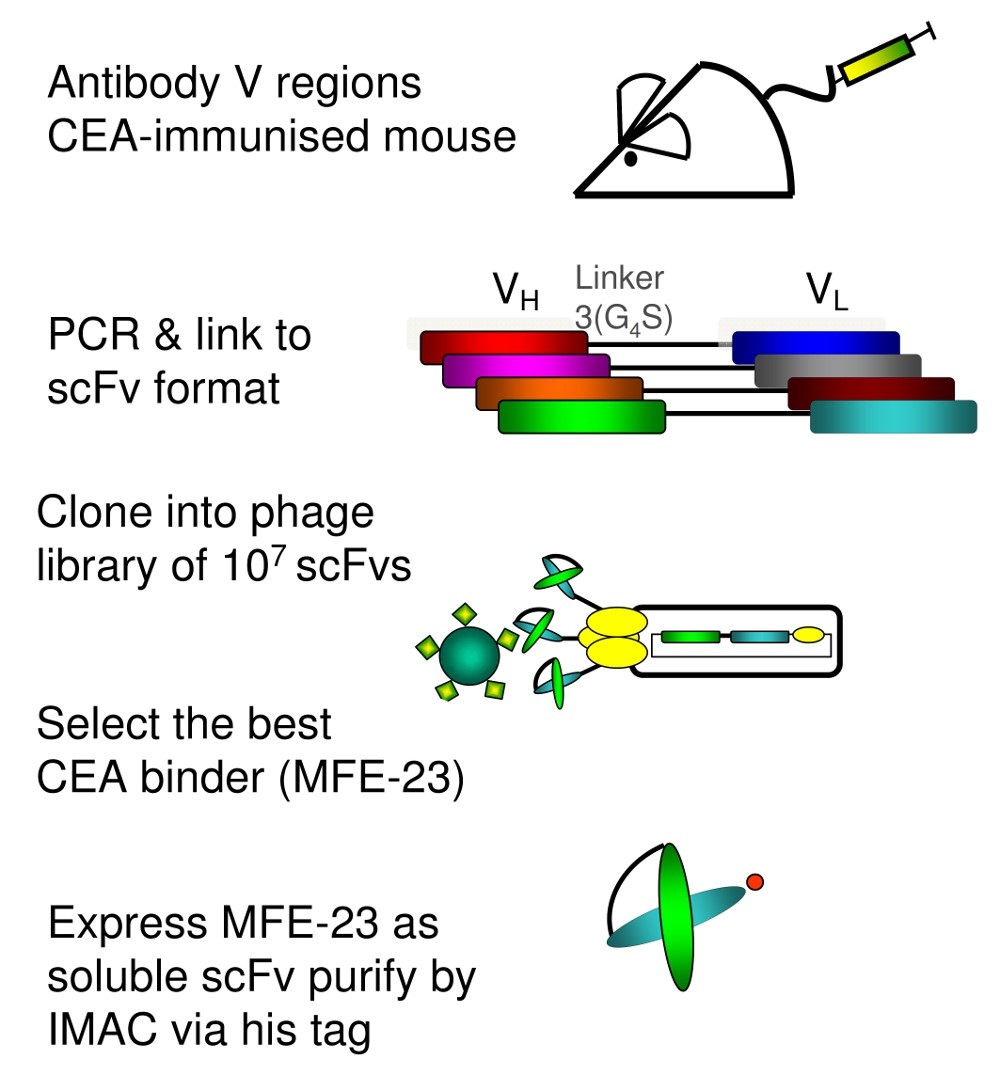 But our bodies eliminate scFv antibodies from the body too quickly for use as drugs themselves, so alternative strategies are needed. For Chester’s group, that includes Antibody Directed Enzyme Prodrug Therapy (ADEPT), where an enzyme is fused with a phage-derived antibody that collects in a cancer patient’s tumour. In trials, they have then given that patient an initially non-toxic prodrug that’s activated by the enzyme only in the tumour.

“Phage display technology is being used to discover new targeted cancer treatments with limited side effects.”

The University of Cambridge’s John McCafferty, who invented phage display at Cambridge Antibody Technology, is now focussing on using it to make antibodies that block cell signalling. For example, calling on giant phage display libraries, his team has found antibodies that block the Notch signalling pathway. That holds promise both for understanding this important process, and as a cancer treatment with limited side effects, he told the conference.

Hajitou explained how his team has used vector hybridising adeno-associated virus (AAV) and a single-stranded bacteriophage to overcome these problems. Using this AAVP vector they have delivered tracer molecules into a rat model of sarcoma, allowing them to be imaged and from there developing a pre-clinical drug response model.

Beyond imaging, Hajitou’s group have used a similar approach to deliver tumour-killing genes using in vitro and in vivo models. Having worked to optimise gene delivery and expression, the group has now received funding from the Qatar Foundation, with the target of reaching clinical trials within five years.

Elsewhere at Imperial, Sivaramesh Wigneshweraraj has led an effort where a bacteriophage helped identify compounds for small molecule antimicrobial drugs. They have identified a protein from T7 bacteriophages known as Gp2, which inhibits E. coli RNA polymerase (RNAp), the enzyme responsible for transcription of all bacterial genes.

Wigneshweraraj and his colleagues have studied the interaction between the two partners, and how Gp2 inhibits conformational changes in RNAp that allow interactions with DNA. From that knowledge they have produced 340 small molecule Gp2 mimics, finding one with bacteriostatic activity similar to rifamycin, he indicated. 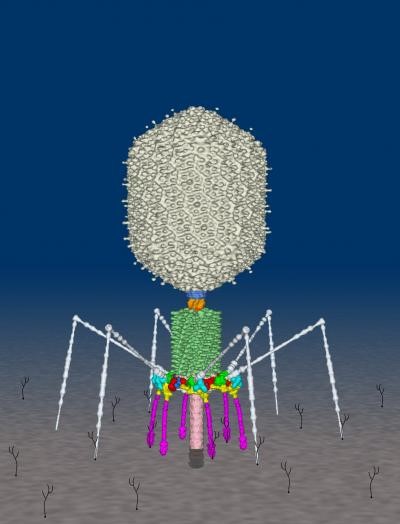 Experiments on difficult-to-grow Mycobacteria avium paratuberculosis (MAP), known to cause Johnes’ disease in cattle and linked to Crohn’s disease in humans, can be enhanced using bacteriophages. University of Nottingham’s Ben Swift described a new assay infecting MAP cells with D29 mycobacteriophage, and plates them in a lawn of fast growing M. smegmatis using soft agar. As infected cells die and lyse, they release phage that infects and kills the M. smegmatis cells and leads to the formation of a plaques in the lawn. Each plaque therefore represents one MAP cell, which can be then be isolated and tested further.

And although the idea of using bacteriophages to fight bacteria directly is comparatively well-established, such approaches are again growing in importance. Diana Alves and Patricia Esteban, both from the University of Bath both discussed how bacteriophages can repress wound infections. Alves had developed a bacteriophage cocktail that could infect 90% of Staphylococcus aureus strains, completely suppressing some strains of MRSA, and eradicate S. aureus biofilms within 48 hours. Esteban presented a ‘mayonnaise-like’ emulsion formulation for treating burn infections, eliminating electrostatic repulsion between bacteria and bacteriophage K.

Antibiotic use in farming is blamed for part of today’s resistance problem, and so bacteriophages are of interest as alternatives. With phages already approved to control E. Coli in red meat and Listeria, Martin Loessner from ETH Zurich, Switzerland, explained how he and his colleagues developed an anti-Salmonella variety. Commercialised by Micreos in Wageningen, The Netherlands, the S16 bacteriophage gained approval from the US Food and Drug Administration at the end of 2013.

Bacteria also pose a threat to arable agriculture, such as in ‘severe kiwi pathology’ discussed by Domenico Frezza from the University of Tor Vegata in Rome, Italy. A Pseudomonas syringae infection that leads to the need to burn kiwi fruit plantations, Frezza had found a combination of two phages that offered protection. But realising that one of them had been previously been discovered, he called for a phage database and bank to be created to support the growing field.

The vast diversity of bacteriophages requiring such a catalogue was underlined by Brian Reavy from the James Hutton Institute in Dundee, UK. Investigating their role in soil ecosystems, Reavy used metagenomic analyses to sequence DNA from all viruses in various samples, finding hundreds of unclassified ones. Today, we know very little about the bacteriophage world, he stressed.

There’s also still much to learn about bacteriophages from the human body, underlined Colin Hill from University College Cork, Ireland. It’s often said that there are ten times as many bacterial cells in our bodies than human ones, he noted, but there are ten times as many viruses again. And these viruses are similarly vital and individual to our gut ecosystems as its microbiota.

A combination of two viruses that Hill’s team isolated from a sewage works was able to kill Pseudomonas aeruginosa infection in a cystic fibrosis (CF) lung cell line and a mouse model. He discussed another that kills Clostridium difficile, a major cause of serious gut infections among hospitalised patients. Such bacteriophages may be partly behind the success of stool transplants, where faecal bacteria from a healthy individual are donated to an ill recipient, he hinted. 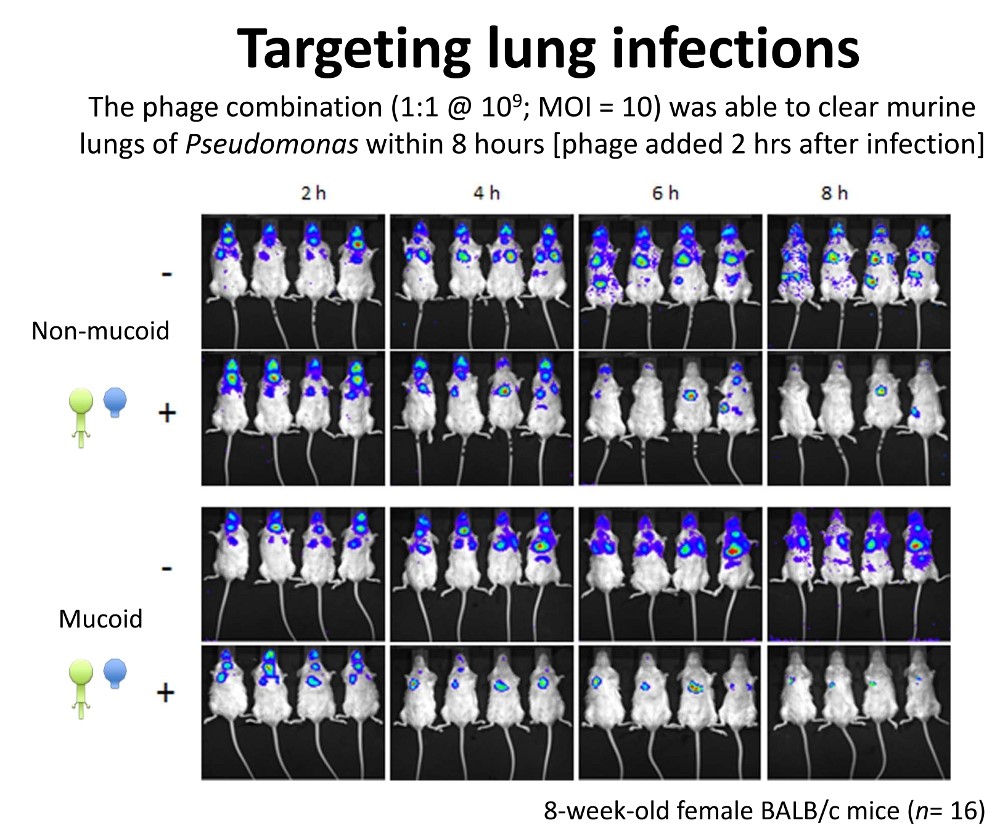 As well as CF, Pseudomonas aeruginosa is associated with lowered lung function in other disorders bronchiectasis and chronic obstructive pulmonary disorder, explained Darren Smith from Northumbria University in Newcastle, UK. Though the bacterial communities are almost identical, each has different phage communities and biology, he noted. In colonising the lung, the bacteria and their phages must adapt rapidly, and Smith’s team is studying how the phages influence bacterial infectivity.

Though new bacteriophages are readily found, the conference underlined, we are still exploring their biological roles and potential uses. As humanity makes more discoveries, these tiny viruses look set to propel us towards solving more of our most pressing health problems. 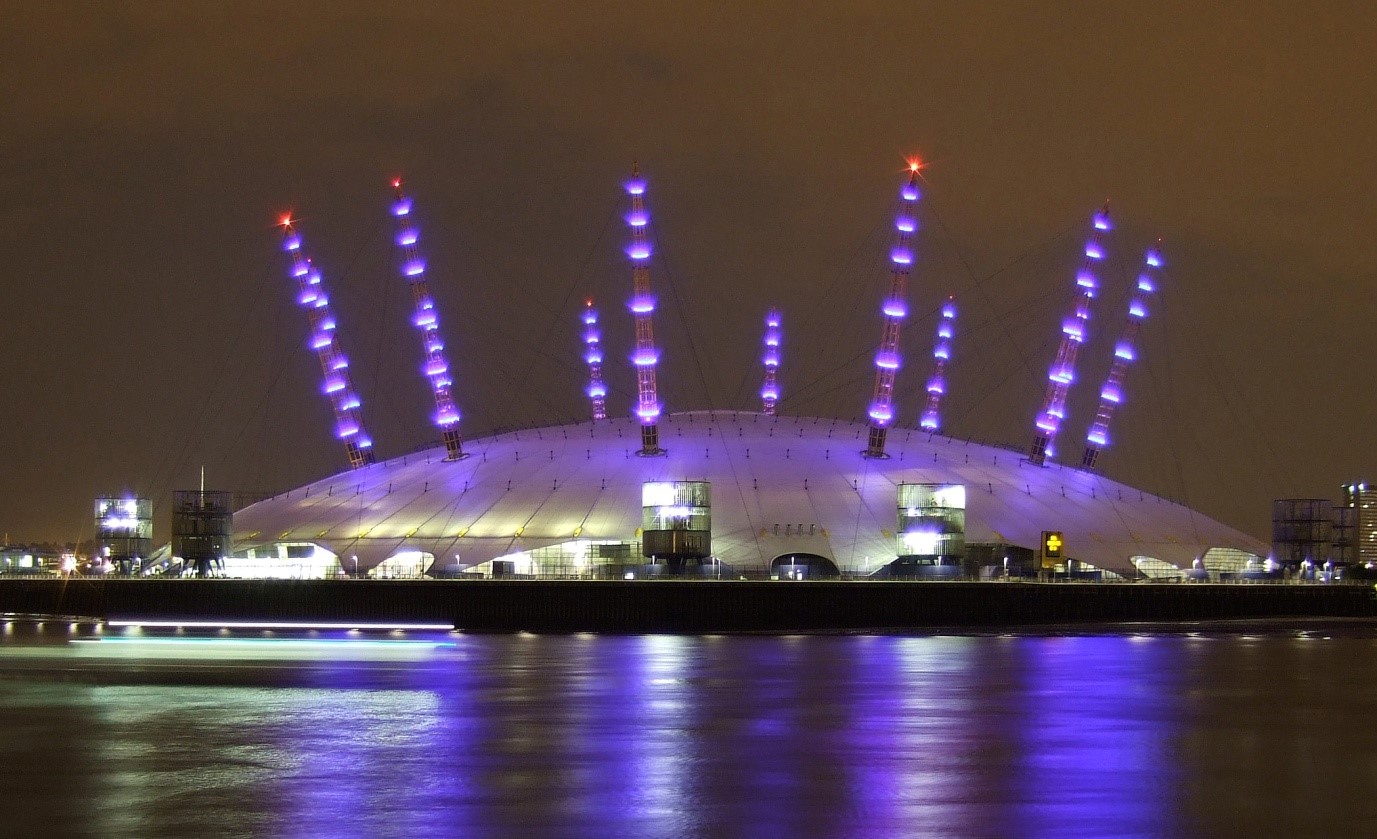 Figure 4: With the masts supporting the giant domed tent of the O2 Arena looking like pili on the surface of a bacteria, it was apt that scientists inside discussed the power and possibilities of bacteriophages. Image credit: Mark Spurgeon/Flickr, used via Creative Commons commercial license.

Andy Extance is a freelance science writer based in Exeter, UK, who has written for Science, Nature Reviews Drug Discovery, New Scientist, Chemistry World and many other outlets. Previously Andy worked in the pharmaceutical industry, producing high throughput screening libraries at Tripos Discovery Research. He has a master’s degree in chemistry, is a Chartered Chemist and Chartered Scientist. He can be contacted at aextance@virginmedia.com.

Closing thought: What is the next frontier in bacteriophage drug discovery?