Sovaldi and the politics of high-priced drugs: are we asking the right questions?

There has been a lot of discussion about the high price of Gilead's Hepatitis C drug Sovaldi, and a variety of strong opinions expressed. But are agencies around the world asking the right questions when evaluating its cost-effectiveness?

A recent letter by members of the US Congress, who have formed an investigation committee to look into the price of Sovaldi, asked questions about factors such as development costs, money spent on advertising and foreign discounts. However, examining these factors alone does not really get at the heart of the drug's cost-effectiveness. This article provides an analysis of how agencies around the globe are evaluating Sovaldi to provide a truer assessment of its value.

Sovaldi, has been widely praised as a significant breakthrough and an important innovation. It offers a cure rate of around 90 per cent and, for some patients, comes with far milder side effects than peginterferon-based regimens. And Gilead appears to be reaping the benefits, with sales of approximately $5.8 billion in the first two quarters of 2014. In its first year, it is on track to become one of the best-selling drugs ever.

Most news about Sovaldi, however, does not focus on these positives. Most of the discussion centres around one concern: the price. In the US, Sovaldi costs $1,000 per pill, with a typical 12-week treatment costing $84,000 or more. Many patients will need to take the drug for longer, further driving up the cost. As has been stated previously, the price is causing uproar among individuals, insurers and the federal government about who will pay for it. In addition an August 2014 New York Times article also reported on reactions to its cost, asking who will foot the bill, and for how long the printed price will remain so high.

Sovaldi does have its champions too. Former Associate FDA Commissioner, Peter Pitts, who is a Context Matters advisor, highlighted how high the price of not using Sovaldi can be in a New York Post article (July 2014). He detailed how its use could cut long-term medical costs, and boost the economy overall. He is one of many who point out that the short-term cost of Sovaldi can buy significant long-term benefits.

Understanding the cost of treatment

Indeed, many questions surround the drug's price: Why does it cost so much? Who is going to pay for it? Why is it considerably more expensive in some countries than in others? Most importantly, is it worth the cost?

US Senators Ron Wyden and Chuck Grassley, members of the Senate Committee on Finance, wrote a letter to Gilead CEO Dr John Martin in July, requesting more detailed information on Sovaldi. But are they asking the right questions?

The senators stated that 'although Sovaldi has the potential to help people with HCV, at $1,000 per pill, its pricing has raised serious questions about the extent to which the market for this drug is operating efficiently and rationally', and noting that providing the drug would require significant government spending. They also pointed out that roughly one third of those with Hepatitis C in the US are incarcerated, so taxpayers 'could end up paying billions of dollars buying Sovaldi to treat inmates'. To determine whether the price is justified, the senators asked for:

• Costs of acquiring Pharmasset, the company that originally developed the drug

• Payment records and communications that may reveal conflicts of interest

• Cost of Sovaldi in different countries, and how these lower costs are accounted for within Gilead's financials

The senators are trying to understand if Sovaldi is worth the expense and if it is priced fairly. However, their enquiries suggest that the cost of the drug should be divorced from the value it offers to those who need it and, more broadly, to society. They focus on the cost of the drug, but fail to consider the effectiveness and value.

"Given the cost of Sovaldi, proper diligence and scrutiny is certainly warranted; however, context appears to be missing from the senators' letter"

For most patients, the end result of a regimen of Sovaldi is that they no longer require treatment for Hepatitis C. The drug will reduce the number of people with Hepatitis C and mitigate the need for expensive future treatments. Given the cost of Sovaldi, proper diligence and scrutiny is certainly warranted; however, context appears to be missing from the senators' letter.

Many other countries have concerns about paying for high-cost drugs. But unlike the US, several, including Canada, Scotland, England, France, Germany, Australia, Brazil, and South Korea, have formal Health Technology Assessment (HTA) agencies to evaluate the effectiveness and/or cost-effectiveness of such drugs.

HTA agencies operate in very different healthcare systems. Their methodologies and decisions often differ. Some agencies explicitly consider cost in review processes, while others leave price determinations to others. However, they all focus primarily on effectiveness/efficacy. A thorough evaluation a drug's effectiveness/efficacy provides necessary context to any discussion of cost.

HTA agencies that explicitly consider cost may decide not to reimburse or list a drug for economic reasons, even if the drug is shown to be effective/efficacious. The chart below shows that these economic reasons are never isolated from efficacy/effectiveness. Agencies sometimes choose not to list drugs because they cost more than existing treatments that perform equally well or because incremental gains in effectiveness/efficacy come at too high a cost. 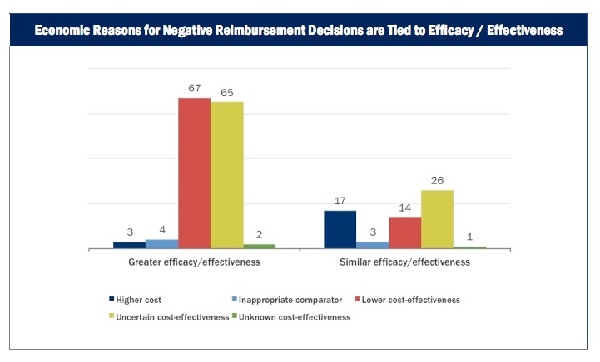 The SMC advised listing and reimbursing Sovaldi, noting that treatment regimens including Sovaldi 'produced sustained virological suppression in patients with all genotypes of Hepatitis C' and that Sovaldi 'was the first medicine licensed for use in interferon-free regimens and may be associated with improved tolerability compared to standard, interferon-based regimens'. Interestingly, SMC recommended the drug for all genotypes of Hepatitis C Virus (HCV), whereas other agencies came to significantly different conclusions for those with different HCV genotypes and treatment histories.

"IQWiG found a non-quantifiable indication of added benefit only in patients with HCV genotype 2, and no proof of additional benefit in other patient groups"

In Germany, for instance, IQWiG found a non-quantifiable indication of added benefit only in patients with HCV genotype 2, and no proof of additional benefit in other patient groups. It found problems with the clinical trials used as evidence, stating that 'the manufacturer presented no adequate analyses for infection with type 1 and type 3 to 6 viruses and for HIV coinfection'. G-BA, which uses IQWiG's advice to make a final evaluation, found an indication of minor additional benefits for most patient groups and an indication of significant additional benefits in combination with ribavirin in treatment-naïve patients with HCV genotype 2. They still found no evidence of additional benefit in some patient groups. The separate decisions for different patient populations suggest that, in Germany, the drug may be available to a narrower subset of patients, thus limiting the overall budget impact.

France's HAS also evaluated the drug and found that it offered a noteworthy improvement over existing treatments.

Not the full picture

The value of a drug cannot be determined by looking at its cost alone; but the senators' questions suggest that this is exactly what they are attempting. In-depth information about effectiveness/efficacy and value provides necessary context to any discussion about drug cost. Questions about mounting healthcare costs are paramount, but are only meaningful in the proper context. A myopic focus on cost alone will neither address the problem of rising healthcare costs nor grant insight into the cost-effectiveness of new drugs.

Daniel Liden is an Associate Data Analyst at Context Matters. He received his bachelor's degree from the University of Chicago in the history, philosophy, and social studies of science and medicine. Before starting at Context Matters in 2012, he was a freelance writer and editor and as a biomedical research assistant at labs at the University of Chicago and the Van Andel Institute in Grand Rapids, Michigan.

Yin Ho is the founder and CEO of Context Matters, a healthcare information and data analytics technology platform company based in New York. A licensed physician trained in emergency medicine, Dr Ho left medicine in 1998 to focus on the emerging eHealth sector. Prior to that, she was vice president of corporate strategy at Medidata Solutions. She has also held senior positions at Pfizer, leading initiatives and investments in eHealth. She was director of business development at Emergingmed.com, an e-clinical trial company, and a member of the advisory board of RapidTrials.

Yin holds a BA from Brown University, MD from Yale University School of Medicine, and MBA from Harvard Business School.

Have your say: Are the international assessment bodies asking the right questions when evaluating high priced drugs?