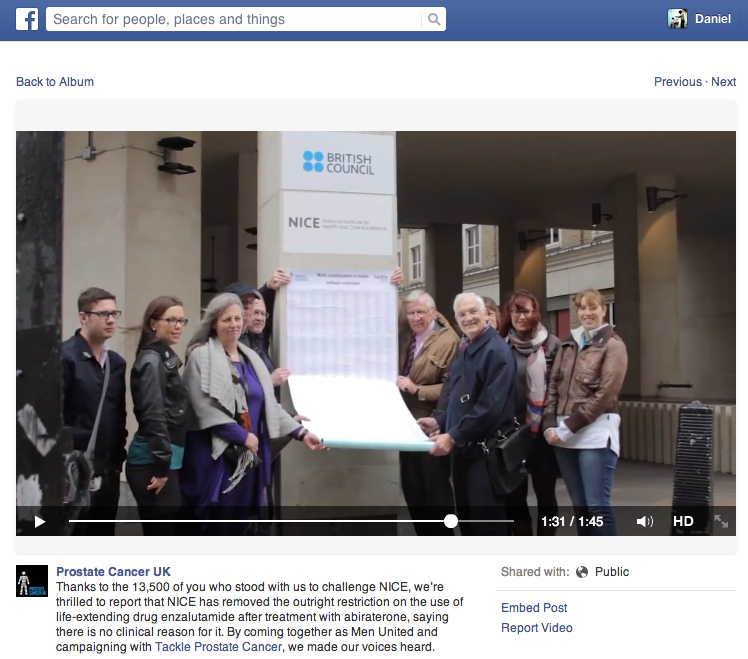 The cost-effectiveness watchdog’s meeting was a crucial one, as it was making a final review of its earlier decision to not recommend the drug’s use on the NHS in England and Wales.

The same day, Dr Carol Cooper, a doctor and journalist with significant influence online, posted a Tweet challenging NICE on its earlier decision to restrict access to the drug. “Men with #prostatecancer could be denied their last hope of survival by @NICEcomms. Please RT to #challengeNICE #enzalutamide”, she Tweeted. 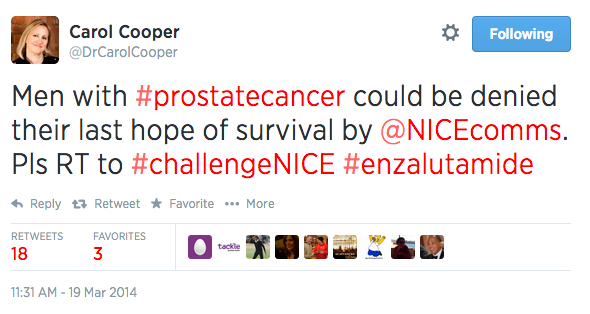 Dr Cooper’s tweet was shared extensively online by others including academics, patient groups and patients. 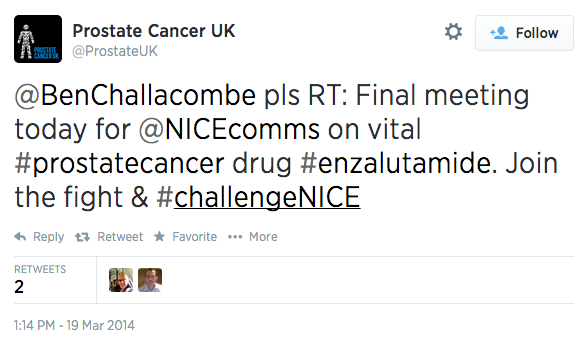 Prostate Cancer UK kept up its day of online campaigning, Tweeting again in the afternoon, “Last @NICEcomms meeting for vital drug #enzalutamide taking place now. Join @ProstateUK & #challengeNICE to remove restrictions”. This tweet was shared by healthcare professionals ranging from GPs to urologists and a Consultant Professor at University of Warwick.

Prostate Cancer UK and Tackle Prostate Cancer also campaigned in person outside NICE’s office on the day of the meeting to deliver a petition signed by 13,000 people urging NICE to make enzalutamide available to all men with prostate cancer. According to the patient group’s Facebook page, Sir Andrew Dillon, NICE’s chief executive, invited a representative inside to discuss the petition.

Following the NICE committee meeting and online activism by patient groups and healthcare professionals, NICE issued final draft guidance last month recommending Xtandi for prostate cancer patients who have previously been treated with docetaxel. This was a significant move because, as NICE stated, its previous draft recommendations had not recommended the product for people who had previously been treated with Janssen’s Zytiga (abiraterone). In the new draft, this guidance has been removed, increasing access to Xtandi for a greater number of prostate cancer patients.

In a statement, NICE acknowledged the role of patient groups and professional organisations in its decision-making: “We run consultations that allow interested organisations and members of the public to comment on all of our guidance in draft format, before it is finalised. During consultation on the draft recommendations for using enzalutamide, we received a number of responses, including data and comments from the manufacturer of the drug, professional organisations and patient groups.”

Despite the victory for Prostate Cancer UK and its activist peers, just a few days after the draft guidance on Astellas’ Xtandi, NICE issued preliminary guidance which does not recommend Janssen’s Zytiga for prostate cancer patients whose first treatment has failed and for whom chemotherapy is not yet clinically indicated.

Like its earlier initial guidance on Xtandi, the preliminary guidance on Zytiga will now enter a consultation process, during which NICE welcomes the views of healthcare professionals and others. In its statement about the Zytiga guidance, it says: “Consultees, including the manufacturer, healthcare professionals and members of the public are now able to comment on the preliminary recommendations which are available for public consultation. Comments received during this consultation will be fully considered by the committee and following this meeting the next draft guidance will be issued.”

It remains to be seen whether patient groups, healthcare professionals and others will rally behind Zytiga in the very visible way they did during the Xtandi hearing. But as the healthcare engagement landscape continues to evolve, the role of Digital Opinion Leaders in influencing policy and practice has never been more important.

Daniel Ghinn is CEO of Creation Healthcare where he has been consulting on the digital behaviours of health stakeholders since 1998. In the late 1990s, Daniel helped healthcare professionals, clinics and pharmaceutical companies to establish their first ever online presence. More recently, in 2012 Daniel coined the term ‘Digital Opinion Leaders’ for pharma and then pioneered Creation Pinpoint, the world’s first technology and service for the study of healthcare professionals in public social media. Daniel Tweets at @Engagementstrat.
Have your say: Do online stakeholders influence policymakers in drug recommendations?

How data is crucial to the relaunch of the Cancer Moonshot