In the third in her series of five articles, Leela Barham considers the extent to which the third of the UK PPRS’ objectives – to keep the branded medicines bill within affordable limits – has been met.

The Pharmaceutical Price Regulation Scheme (PPRS) is a voluntary agreement between the Association of the British Pharmaceutical Industry (ABPI) and the UK government, represented by the Department of Health (DH). It’s third objective is to ‘improve access to innovative medicines commensurate with the outcomes they offer patients by ensuring that medicines approved by NICE are available widely in the NHS’. So has the 2014 PPRS delivered on its commitment to improved access?

The 2014 PPRS is not just about (indirectly) regulating pricing and managing the affordability of branded medicines to the NHS. It covers much more, including a whole chapter on Access and Outcomes.

This chapter points out that both the DH and NHS England (NHSE) want to improve overall outcomes for patients, including through access to effective medicines. The objective links improving access to wide use of NICE-approved drugs.

It includes a number of ways that this will be delivered, which can be split into three main areas; the way that NICE works, implementation of positive NICE approvals and measuring uptake.

The way that NICE works

As part of the chapter, NICE was required to consult formally before implementing changes for Value Based Assessment (VBA) (a revised approach including wider benefits of medicines than the dominant cost-per-Quality Adjusted Life Year [QALY] paradigm). Linked to this was the option for companies to ask for a value-based appraisal, as not all new medicines get the NICE treatment.

In practice, though, the challenge of setting out a new way to assess value – through VBA – was revealed when the NICE proposals were roundly criticised.  NICE did meet the requirement to consult, so technically it ticks the box.

NICE essentially had to give up another PPRS commitment, although relevant issues were included in the independent Accelerated Access Review (AAR) on speeding up access to innovation, and End of Life criteria remain (where certain criteria are met, NICE can accept a higher cost-effectiveness threshold).

The ability to request VBA presumably became academic when it was dropped. Up to June 2016, no company had requested one, based on a freedom of information (FOI) response from NICE.

Showing the detailed nature of the PPRS, the chapter also includes a commitment to consider the use of unlicensed comparators as part of NICE appraisals. In addition, it covers the optimisation of the contribution of Evidence Review Groups (ERGs) – independent academic groups it uses to critique company submissions for Single Technology Appraisals.

In its June 2016 FOI response NICE said that agenda items under discussion with the ABPI included use of unlicensed comparators. It’s not clear what has changed, though.

NICE highlights that the ERGs have been discussed, including giving opportunities for industry to comment on the ‘scope of work’ they conduct. Again, what changed is unclear, from the outside, especially as the NICE Guide to the methods of technology appraisal dates back to 2013. That states that when considering an unlicensed medicine, the NICE Appraisal Committee will have due regard for the extent and quality of evidence, particularly for safety and efficacy, for the unlicensed use.

Subsequently, the NICE Guide to the processes of technology appraisal was updated and published, after the 2014 PPRS was agreed. Again it’s not clear how things have changed, if at all, as a result of discussions between NICE and the ABPI.

The chapter also notes a commitment to keeping the basic cost-effectiveness threshold at between £20,000 and £30,000 per QALY. This was an important win for industry in the context of a lively and controversial debate on what the threshold should be – or even if there should be just the one – in which some economists suggested that it should be lowered to around £13,000. Others disagreed, based on the work that produced the £13,000 estimate.

Though the cost-effectiveness threshold is £20,000 to £30,000 on paper, in practice thresholds for NICE decisions have become more complex during the lifetime of the 2014 PPRS.

Analysis of past decisions finds that the real cost-effectiveness has, in fact, been higher than £30,000. A new threshold for ultra-orphan drugs, of up to £300,000 per QALY, has also been put forward. However, certain criteria need to be met and some say they won’t be in practice.

The value of achieving a NICE approval, whatever the threshold, is also potentially diluted with the prospect of negotiation with NHSE. That could apply even if a drug gets the NICE nod, when it costs more than £20 million a year in any of the first five financial years after launch, known as the budget impact test. The ABPI is seeking a Judicial Review, so time will tell if this test is implemented.

The PPRS links access to NICE-approved drugs. There are commitments to ensure that the NHS implements NICE Technology Appraisals (TAs) and Highly Specialised Technology (HST) – ultra-orphan – guidance. There doesn’t appear to be an audit – not even of a sample, as there are so many NICE TAs – of whether objective measures have been undertaken, such as incorporation in formularies within 90 days. NICE does, however, provide guidance on what to do. It is also backed up by the expectation set by the quality regulator, the Care Quality Commission (CQC), that the NHS conforms to NICE TAs.

The section also covers implementation of the review Innovation, Health and Wealth (IHW), which reported back in 2011, seeking to accelerate adoption and diffusion of innovation within the NHS – including a NICE implementation collaborative (NIC). The most recent challenging variation report from the NIC dates from January 2016. Another report, from February 2014, aimed at improving access to cost-effective technologies for novel anticoagulants,  remains in draft. Does this signal a slowing of joint efforts? Or, more charitably, simply that uploading to the website is not high on the list, in itself reflecting priorities.

An FOI response from NHSE in June 2016 revealed that the NHSE Industry Council had been set up and initial meetings were held in April and October 2014. However a March 2015 meeting was cancelled while NHSE “reviews its partnership engagement with industry and no further meetings have been arranged”.

A further FOI response from NHSE in September 2016 revealed that the Pharmaceutical Industry Sector Partnership (PISP) – part of the joint work envisioned in the 2014 PPRS – had not met since September 2015 and that NHSE had “no current plans for it to meet again”. It added: “discussions commenced in late 2014 with regards to the PISP developing a work plan and objectives, but this was not completed and, along with the Industry Council, work in this area has been suspended due to changing organisational priorities”.

NHSE also said that the main output was a Memorandum of Understanding (MOU) between NHSE, the ABPI and the British Generic Medicines Association (BGMA), as well as PISP input into a Compact agreement between the ABPI and NHSE relating to specialised commissioning.

An FOI response from NICE in June 2016 showed that the NICE Industry Council was set up and met in 2015 and 2016. The agenda and papers weren’t released then, and can’t be found online now. That makes it hard to know what has been discussed, and harder still to know what has changed as a result. NICE has, however, set out how it wants to work with the industry in a January 2017 position paper. That shows willing, at least.

MISG still exists, but the website suggests that it hasn’t met since November 2015. The ABPI has also queried the level of engagement at senior levels. A subgroup of MISG – the Medicines Access Group (MAG) – appears to have held talks and is confirmed as the right forum for a joint discussion on issues of access to medicines.

Benchmarking and monitoring were also set out in the chapter, including what is described as a single transparent programme of activities looking at comparative medicines use in the NHS. Although not stated explicitly, this presumably includes the Innovation Scorecard as well as indicators from the Pharmaceutical Industry Competitiveness Task Force (now replaced by the Office for Life Sciences’ life sciences competitiveness indicators), which includes comparison with other countries.

The Scorecard pre-dates the 2014 PPRS, being first published in January 2013, no doubt the result of a lot of work. It has evolved during the lifetime of the 2014, including a move to a web tool.

Currently it covers 104 medicines and the latest stats highlight that 74% of medicines were prescribed more in the period October 2015 to September 2016, versus the previous year. But is this is the right kind of increase, in line with patient need and NICE guidance? There is little to benchmark against from what might be expected from the NHS if it followed NICE guidance, with the exception of NOACs.

The story there is mixed; overall use of NOACs went above what was expected from NICE TAs (Figure 1), but the data suggest that individual NOAC use is less than expected. 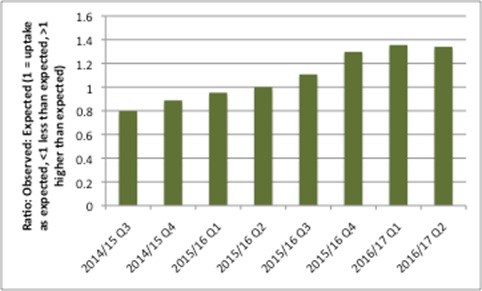 The data comparing uptake with other countries come from the OLS. Given potential differences in the basket of drugs and countries, again UK uptake is mixed versus other countries, but with improvements over time. For example, median uptake has increased over time for the first year since launch in the 2017 indicator versus previous years, but it remains below 20% (Figure 2).

Figure 2: Median uptake of NICE approved drugs in the UK versus other countries 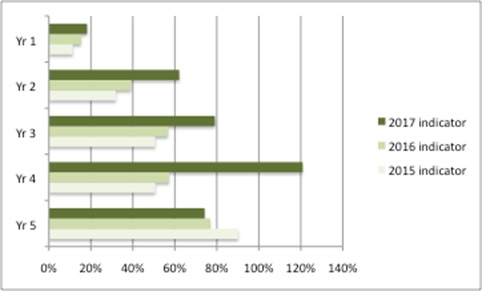 The Access and Outcomes chapter was, with hindsight, perhaps too ambitious. While many of the commitments have a prima facie link to access and outcomes, in reality they are difficult to define and even harder to assess to know if they have made a difference to access and, most importantly, outcomes for patients.

The objective to improve access is laudable, and uptake is better on some measures, but more needs to be done.

A successor scheme could aim to do less, but better. It also has the opportunity to build on the AAR and the UK strategy for life sciences. The strategy in particular has some important, and measurable, goals that could be written in to a future PPRS. Not least of these is to ensure that the UK sits in the top quartile of comparator countries for speed of adoption and overall uptake of innovative, cost-effective products, by the end of 2023.

Read the previous two articles in this series:

Part 1: Unstable and unpredictable? The reality of the PPRS

Part 2: What is ‘affordable’? The reality of the PPRS