An overview of the latest on immunotherapies, progress in multiple myeloma and benefits of patient-reported outcomes. 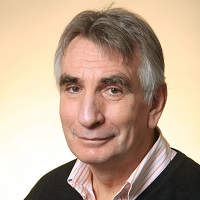 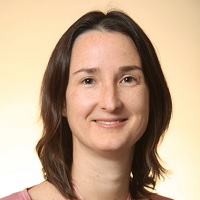 While 2015 was marked by great announcements in the field of immunotherapy – particularly in melanoma and non-small cell lung cancer (NSCLC), this year’s American Society of Clinical Oncology (ASCO) annual meeting suggested a transitory period. Indeed, the majority of presentations addressed follow-up or updated analyses of 2015 publications and interesting phase 2 trial results that needed confirmation with larger patient populations and comparative arms.

Immunotherapies – a pause before the big rush

Undeniably PD-1/PD-L1 checkpoint inhibitors continue to lead the way for tumours such as melanoma, NSCLC and bladder cancer, where they are approved (the bladder indication is approved in the US only and expected to follow suit in Europe soon), as well as in new indications such as metastatic breast cancer, head and neck cancers, metastatic colorectal cancer, renal cell carcinoma, Hodgkin’s lymphoma and, of course, multiple myeloma.

This year’s event confirmed the breakthrough status of anti-PD-1/PD-L1s, which have demonstrated impressive efficacy results in terms of duration of response, as shown by the updated results of the CheckMate-067 trial (22.3-month median duration of response of Opdivo [nivolumab, Bristol-Myers Squibb {BMS}] in melanoma versus 14.4 months for Yervoy [ipilimumab, BMS] alone).1

However, there has also been excitement around combining immunotherapies to achieve higher response rates. Anti-PD-1 and anti-PD-L1 monoclonal antibodies work as checkpoint inhibitors, blocking a signal that would have prevented activated T-cells (the body’s natural killers) from attacking the cancer, thus allowing the immune system to clear it. However, anti-PD-1 and anti-PD-L1 therapies work better when there are enough T-cells in the tumour microenvironment, which occurs in less than half of the patients (43.7% objective response rate [ORR] for Opdivo-treated patients in the CheckMate-067 trial). Hence developed the idea of combining two immunotherapies, or combining an immunotherapy with other agents, including conventional chemotherapy, to reinforce the immune environment into the tumour and therefore increase the efficacy of the PD-1/PD-L1.

Until now, the dual checkpoint blockade CTLA-4 and anti-PD-L1 has yielded successful results in terms of efficacy, but with limited clinical interest, given the high incidence of adverse events. In the 18-month follow-up results of the Checkmate-067 trial, which compares Opdivo (anti-PD-L1) + Yervoy (CTLA-4) or Opdivo alone to Yervoy alone, the association Opdivo + Yervoy was highly superior to Yervoy alone (11.5 months progression-free survival [PFS] versus 2.9 months), and Opdivo alone was also superior to Yervoy alone (6.9 months PFS versus 2.9 months). However, the number of adverse events was so high that uptake is likely to be limited (56.5% Grade 3 or 4 versus 19.8% for Opdivo alone and 27% for Yervoy alone).

Great rewards are likely for the pharma company that finds the combination of agents offering optimal synergy: an increased percentage of response rate, maintained duration of response and an acceptable level of toxicity.

So the combination Opdivo + Yervoy is reserved for fit patients in good overall condition, with a low/moderate burden of disease in Europe. Meanwhile, Opdivo  and Keytruda (pembrolizumab, Merck & Co) are gaining ground in metastatic melanoma – including among BRAF-mutated patients, and in NSCLC, and a similar trend can be expected in upcoming label extensions: bladder cancer, head and neck cancer, renal cell carcinoma and metastatic colorectal cancer. 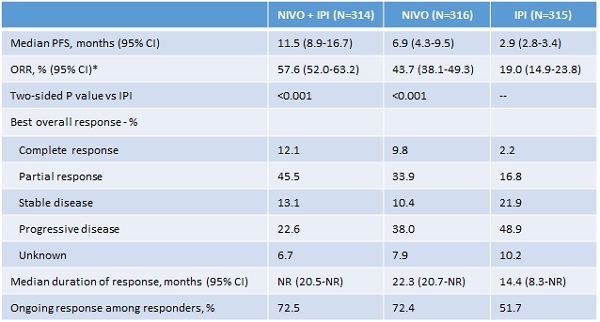 Multiple myeloma was also a topic of great interest at this year’s meeting because of the number of new agents in development in this indication.

In November 2015, three novel agents received approval from the US Food and Drug Administration (FDA) for treatment of relapsed/refractory disease:

One highlight was the announcement of the results of the phase 3 CASTOR trial.2 This compared the safety and efficacy of Darzalex, Velcade (bortezomib, Johnson & Johnson [J&J]) and dexamethasone (DVd) versus Velcade and dexamethasone (Vd) in subjects with relapsed or refractory multiple myeloma. The addition of daratumumab to bortezomib and dexamethasone (DVd) approximately doubles the rates of very good partial and complete response compared to the doubled Vd: 59% VGPR versus 29%, and 19% CR versus 9%. The effects on one-year progression-free survival (PFS) were also impressive: 61% in the DVd arm versus 27% in the Vd arm. More remarkable is that the efficacy gains are not associated with any cumulative toxicity.

Darzalex is a human CD38 IgGk monoclonal antibody that targets and mediates destruction of CD38+ immunosuppressive regulatory cells and promotes T-cell expansion and activation. It represents a novel mode of action, whereas many new agents in multiple myeloma use similar modes of action to the standard of care in upfront or relapsed multiple myeloma (PIs such as Velcade, Kyprolis [carfilzomib, Onyx/Amgen], Ninlaro or immunomodulatory drugs such as pomalidomide).

With these results Dr Antonio Palumbo from the University of Torino, who presented on the CASTOR trial, estimated that DVd could ‘potentially be considered a new standard of care for patients with relapsed/refractory multiple myeloma currently receiving Vd alone’.

So Darzalex and J&J have undoubtedly gained a substantial advantage in the increasingly crowded multiple myeloma landscape.

In Europe, a switch in treatment patterns can be expected in the coming months:

An inventive phase 3 trial, conducted by Dr Fabrice Denis at the inter-regional Jean Bernard Institute in France, showed very interesting results in improvement of overall survival in patients with lung cancer. No drugs were tested in this study, which compared a web application follow-up, where patients self-recorded their symptoms on a weekly basis, with clinical routine assessment and CT scan. This trial showed a significant survival improvement using the web-application follow-up that allowed better performance status at relapse, earlier supportive care and reduction of routine imaging.3

This novel way of monitoring cancer patients is certainly promising, but it may be some time before it becomes widespread.