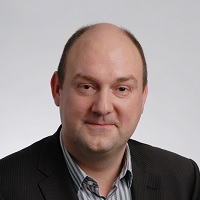 Streamlining processes can improve clinical trial management, in terms of speed, quality and better collaboration. Rik Van Mol reports on the findings from a recent survey of 300 industry professionals.

With the growing number of clinical trials1 and increasing complexity across the clinical lifecycle, life sciences organisations are under pressure to improve study quality and execution. This has prompted industry-wide recognition of the need to streamline clinical systems and processes and drive the sector towards a unified clinical model, according to our recent survey.2

Here are the key findings from the survey and what they mean for the life sciences industry.

The average number of applications used to manage clinical studies was four, with more than one third of respondents (38%) saying they used at least five applications. Not surprisingly, EDC, introduced nearly 20 years ago, was still the most commonly used application (81%), followed by CTMS (59%), and eTMF (57%).

Yet, adoption of modern, active eTMF applications is on the rise. More specifically, however, the research showed a major move away from ‘passive’ systems to ‘active’ eTMF solutions. One-in-three sponsors (31%) reported using a purpose-built eTMF application – more than double the number reported in 2014. Sponsors found active eTMF applications had significant, positive impact on inspection-readiness and improved activities key to unifying clinical operations. These include automated tracking and reporting of documents (68%), central and remote auditing (62%), and visibility into key study performance metrics (50%).

To streamline collaboration and implement end-to-end processes, the survey found that sponsors were moving away from manual systems and continuing to decrease their use of paper. Across almost all functional areas measured, the number of TMF documents managed on paper was down by at least half among sponsor companies since 2014. This is a very positive trend, given that a unified clinical environment requires collaborative processes and technology.

Clinical operations departments led the way, with just 16% of sponsors reporting that ‘most-to-all’ of the TMF documents they managed were on paper, a 25% drop since 2014. As more than half of the documents in a TMF are managed by clinical operations, this underscores the potential impact of this reduction.

However, the survey found that there was still room for improvement in collaboration with external partners. More than two-thirds of sponsors (68%) used email to exchange TMF documents with contract research organisations (CROs). In contrast, only 19% used their eTMF applications to exchange TMF documents with external partners. The problem, of course, is that emailing documents puts information outside of controlled processes, making it harder to track and collaborate on efficiently.

Metrics can help identify trends to drive process improvements across individual studies or portfolios of studies. Yet, it was found that one in four (23%) was not using, or rarely used, data to improve study processes, while roughly half (46%) only used them in some cases.

However, the amounts of data collected, and the extent to which they are leveraged, directly impact improvements to clinical operations efficiency. Organisations using the most data report the greatest numbers of improvements in audit readiness, collaboration, and monitoring activities. 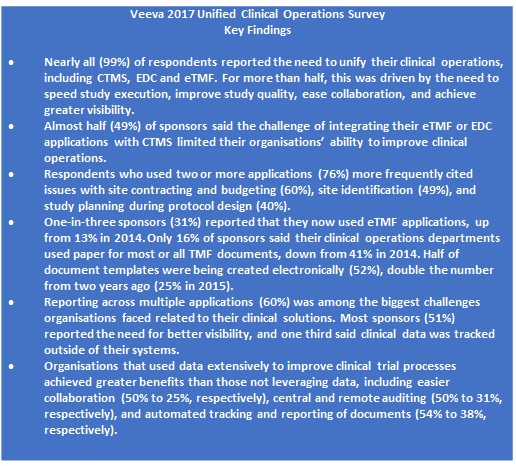 There is industry-wide recognition that a move to a unified clinical model is necessary to address the growing need to improve the quality and speed of study execution. Clinical leaders are looking to achieve higher levels of performance across their study portfolios by implementing end-to-end processes and systems, streamlining collaboration, and leveraging insight from across the trial lifecycle.

Most challenges in managing clinical trials stem from the siloed nature of processes and applications. Some of the most common applications used, such as EDC and CTMS, are based on first-generation technology. They lack the core functionality, modern architectures, and usability required to enable true end-to-end processes and visibility.

Organisations that adopt modern, purpose-built applications, such as ‘active’ eTMFs, report fewer challenges and see greater benefits to their studies. And, when unified, these applications enable life sciences organisations to establish repeatable, collaborative processes and increase oversight and accuracy by consistently leveraging insight across their clinical portfolios.

Rik Van Mol is vice president of R&D strategy at Veeva Systems, responsible for the Veeva Vault R&D suite of applications in Europe. He has nearly 20 years of experience in business/IT consulting and regulated content management in the life sciences sector.

Better customer engagement: Is your data letting you down?