MS advocate Trishna Bharadia explains how diagnosis needs to change and why pharma shouldn’t be using the word ‘patient’. 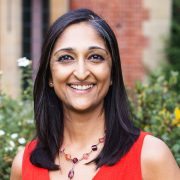 When Trishna Bharadia was diagnosed with multiple sclerosis (MS) she found herself facing a “black hole”, with little idea of where to head next.

Worse still, that diagnosis had taken years to arrive at – Bharadia was diagnosed in 2008 after four years of symptoms.

“Initially my symptoms were put down to other things, and it wasn’t until I lost the feeling down one side of my body that MS came onto the radar,” she says.

“When I was given the diagnosis, in one way it was a relief because I knew what was happening and I could start doing something about it. But it was also difficult because I was given a life-changing diagnosis and was just sent on my way. I wasn’t given any idea of where to go to for information.”

This is what eventually led Bharadia to get involved in patient advocacy.

“There needs to be more awareness about symptoms – in a similar way to how it’s ingrained in the public psyche that if you find a lump, you need to see a doctor.”

“I thought that if I am having these experiences then other people must be going through the same things, and that’s not right. There needs to be a better pathway for when people are given a diagnosis.

“I’m very much the kind of person who believes that if you want something changing, you need to do something about it.”

A path for diagnosis

Bharadia says that the main improvement she would like to see in MS diagnosis is the speed at which patients are identified.

“There’s still not enough awareness and not enough urgency when people present with potential neurological symptoms,” she says. “This is partly coming from doctors, and partly because the people themselves often don’t recognise it as something potentially serious – because a lot of MS symptoms can be put down to other things and can quite easily be ignored. Particularly if you have relapsing MS, it will often get better and people forget about it.

“There needs to be more awareness both publicly and amongst GPs as to what the neurological symptoms can be – in a similar way to how it’s ingrained in the public psyche that if you find a lump, you need to see a doctor. Often what happens is people present with individual symptoms over a space of time and there’s no connecting of the dots.

“When I recently wrote an article about whether we’re getting MS diagnosis right, I asked for case studies on an MS Facebook group and within 10 minutes I was inundated with people saying it had taken them years to get diagnosed, that they had been told it was all their head, that they weren’t serious symptoms, etc. This is still happening.”

Bharadia adds that when people do present with neurological symptoms, they need to be fast-tracked to be seen by a specialist – similar to the two-week cancer pathway.

“People who present with neurological symptoms still can wait ages for an MRI. And then before you know it, months have passed before they can even get their diagnosis.

“In that time, they could have potentially been on treatment, and that’s all time when they are losing brain health.”

Bharadia’s advocacy has grown organically from her initial focus on MS, and she now works with multiple patient associations and charities, as well as with industry, clinicians, and individual people with chronic illnesses. She has also stepped into issues that affect cross-patient communities, such as diversity in healthcare, health literacy, and patient-focused study designs.

“It’s a wide range because I believe we need to be working together. I don’t want to just collaborate with patient associations or industry or regulators, because everybody needs to be talking to each other. To advance care, you need to have multi-stakeholder collaboration and you need to be looking at those overarching issues. Yes, there will be specific issues that might affect certain patient communities due to the nature of the disease, but there are always going to be these general issues as well.”

She says that while there is a “willingness” from pharma to engage with patients, the industry still hasn’t got it completely right.

“That’s a combination of the fact that they’ve not engaged with patients for so long, and the fact that regulatory guidelines still aren’t clear enough. They don’t reflect the reality of how industry wants to engage with patient advocates.

“There’s still a lot of fear from the side of pharma, and a lot of confusion as to what is and isn’t possible. Can they contract patients? What compensation should be involved? Can they fly somebody out to their headquarters in Europe? Are they able to cover carers’ expenses?

“There is also a fear that competitors will be watching for you to make a mistake. If you’re in an industry where that kind of fear is being bred, how can anybody move forward?”

Bharadia adds that pharma is often unable to look beyond people’s conditions and see greater value in their work – in fact, she says that she doesn’t like the word ‘patient’ as it makes the industry see people as “a patient first, and only a patient”.

“Your skills and experiences, what you can bring to the table outside of your insights of living with a certain condition, become devalued – when actually for higher-level patient advocates what we’re often being asked to do is essentially provide business services.

“I take the attitude that I should be engaged because I can do a job. There needs to be a change in mindset in terms of looking at what people are being asked to do, why they’re being asked to do it, what skills and experience and networks they can bring to the table. That’s what should come first.”

Obviously there are still times when pharma needs patients because of their specific experience, but even then companies often forget that there are several different levels and categories of patients – from people who don’t engage much with their diseases, to people who are experts in their disease and ‘pro patients’ who look beyond their patient community to wider issues affecting healthcare.

“Each one of those groups brings a different value to projects,” Bharadia says, “but they are often all lumped together in one group with no distinction made between them. I don’t think that’s the way to move forward because different types of patients are going to be suitable for different forms of engagement.”

Bharadia concludes: “At the end of the day, everyone is a patient of something at some time, so why use that label and see somebody as only a patient? Then all you’re seeing is their disease – you’re not seeing them as a person. I think that’s a very, very important distinction.”

Patient Insights is a monthly series that appears in partnership with Inspire, a company with an online support community of more than 1.5 million patients and caregivers worldwide.

Digitally engaging doctors around the world

Digitally engaging doctors around the world