A skills gap has been threatening to knock the shine off the UK biotechnology sector’s sparkling reputation for the last few years. But an upsurge in the number of pharmaceutical industry apprentices is giving innovation a boost of young and fresh talent.

For National Apprenticeship Week last week, we spoke to Hajra Bibi about confidence, the future of medicine and joining one of the world’s biggest pharma companies at 18.

According to the Association of the British Pharmaceutical Industry (ABPI), there are now 388 apprenticeships in pharma: an increase of 31% since 2015, and 169% since 2013.

The shift follows a survey of the association’s members in 2015, that found “significant skills gaps” in areas including mathematics, bioinformatics, statistics, data and informatics, computational skills and translational medicine/clinical pharmacology.

“Companies are increasingly turning to apprenticeships as a way of securing the skills they need and it’s really important we continue this trend,” said Andrew Croydon, skills and education policy director at the ABPI.

“UK science and academia are the envy of the world and we are vying to be Europe’s premier biotech cluster. To succeed and sustain such a position, we must address existing and evolving skills shortages.”

Among this new breed of “trained-on-the-job scientists” is Hajra Bibi who joined GSK’s biopharmaceutical department as an apprentice straight from school at 18.

The scheme started as a three-year programme during which she worked towards her foundation degree, before being given a full-time position as an associate scientist. But it didn’t stop there, and she is now in the final year of her applied biology bachelor’s degree thanks to the company’s apprenticeship “top up” programme.

Choosing her path into science was a “no brainer” she told pharmaphorum, adding that she had already learnt more than she ever could have imagined at the start of her journey.

“You are gaining a degree, but it’s funded so you are not falling into debt; you are earning a competitive salary and you are gaining invaluable experience,” she said.

“What I have learnt over the last five years is unparalleled to what I would have learnt if I had gone to university full time.”

While university fees were high on her list of considerations, the main reason she plumped for an apprenticeship was her practical learning style.

Explaining that apprentices were given the equivalent of one day for their distance learning studies, she said: “I learn so much better through the applied, ‘doing’ approach rather than through the theoretical approach. 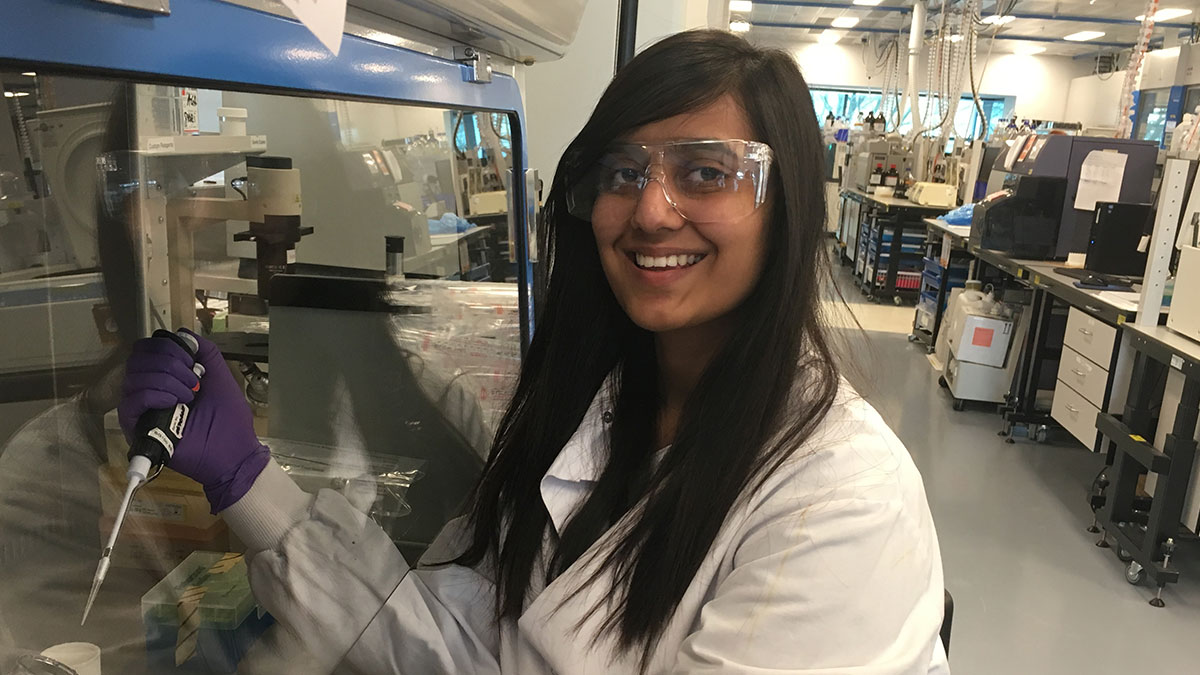 That’s not to say that it’s been easy – walking into a department of established experts at the tender age of 18 was tough, Hajra remembers.

“The biggest challenge, for me, was confidence and it was a really steep learning curve. They were all experts in their field, and I would have to stand up and give a presentation on my work.

“I always thought they would know more than me, but over time I have overcome that and become more confident. You will never know everything about everything, and science is always changing, especially in research.”

Steve Stewart, global talent programmes lead at GSK, said the company was proud to be able to offer career opportunities to young people who want to take different paths, whether that be through apprenticeships or after they have gone to university.

“We take on some of the world’s biggest health challenges and apprentices bring a new, fresh perspective into GSK to help us to do that.

“It’s incredibly inspiring to see apprentices like Hajra making such an impact inside and outside of GSK,” he added.

Hajra, who is a member of the government’s cross-industry Institute for Apprenticeships Apprentice Panel, said her time at GSK had cemented her passion for the industry.

“When I was applying for apprenticeships, I just knew I wanted a career in science, so I went to science-led companies,” she said.

“I am happy at how things turned out and that I ended up here. It’s about giving back and knowing you can potentially make a difference. It’s always in the back of my mind that what I am working on could help someone.”

With medical advances such as personalised medicines, med tech and genomics on the horizon, Hajra predicts big changes in how care is delivered.

“I can see an obvious push towards automation to make things more efficient. The drug discovery process is very long, so if we could reduce that while maintaining safety that would be incredible.

“There’s the influence from the digital side of things, healthcare apps that are changing the way you go about getting medications or care plans,” she said, adding it was an exciting time to be in the sector.

“There’s a lot going on, but I think it’s fair to say it’s always an exciting time to get into this industry because it is so fast paced.”