A diabetes awareness campaign from CDM London proved to be the “Best of Show” at this year’s PM Society Awards, recognising the crème de la crème in pharma marketing.

In a glitzy ceremony at the Grosvenor House hotel hosted by comedian Jimmy Carr, the Contour Diabetes Solutions campaign by CDM and Ascensia Diabetes Care won the top prize.

The pharma company which won the most awards was ViiV Healthcare, while Havas Lynx  stole the show on the agency side.

The 31st annual PM Society Awards, announced at the Grosvenor House Hotel on Friday to an audience of 950 from industry and agencies, saw the Best of Show award being added to the 18 regular categories.

The new Best of Show award followed the success of the Winner of Winners award last year which was won by the 2008 Xenical “Butter” ad. 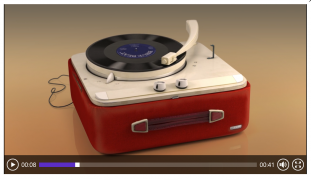 One of the animated films from CDM’s winning entry

The winning entry was based on films which put the voices of real diabetes patients into three animated characters based on obsolete technologies – a record player, a videotape and a Polaroid camera.  The patients related their struggle with outmoded and non-user friendly ways of recording their blood sugar and keeping track of their condition, highlighting the need for new digital technology.

Head judge Dean Woolley, of woolley pau gyro, said: “In selecting this campaign we asked ourselves four questions – is there a proper idea at the heart of it? Does it answer the brief? Is it beautifully done? And is it something we could all be proud of?”

“The work by CDM London for this diabetes campaign really hit the mark on all of these.”

Among the main categories, there was a complete change from last year’s results in terms of pharma company winners. ViiV Healthcare scooped four Gold Awards and two Silvers for their campaign Change the Face of HIV, replacing last year’s highest awarded company Teva.

In second place was EUSA Pharma who took home two Gold Awards, a Silver and a Bronze for work in support of Caphosol. Other highly awarded companies were Pfizer, Teva, Ascensia Diabetes Care, Sanofi Pasteur and Shield Therapeutics who all received at least one Gold Award plus others in the Silver or Bronze category.

Havas Lynx was awarded five Golds, for its work in both HIV and dermatology, as well as three Silver and two Bronze awards. CDM London and Frontera London took three Golds each, with CDM London receiving a total of seven awards and Frontera receiving six.

The PM Awards recognise creativity, impact and innovation across pharmaceutical and healthcare advertising and communications. They are still unique in including five Target Awards that are judged by nationwide online surveys of healthcare professionals or pharmaceutical executives – the “targets” of the work. Other categories are judged by panels of creative agency and industry experts.

“As well as seeing some of the long-standing agencies and their clients, it was fantastic to see some newcomers to our list of finalists and winners. We have now fully integrated digital and interactive work into all our categories, and we have robust ways of judging print alongside digital.”