What changes will the appointment of Matt Hancock MP as Secretary of State for Health and Social Care mean for the NHS?

Being the Health (and Social Care) Secretary is hard. That’s the conclusion Matt Hancock may be reaching as he casts his eye over his in-tray this morning.

It is no overstatement to say it is overflowing. He has Brexit to deal with, and the ‘no deal’ preparations for the health service which the Cabinet signed off last Friday – in hindsight one of the few things it now seems that they did. Many hope he will finally grasp the nettle of social care funding reform as Jeremy Hunt (pictured above) looked like he was about to do.

And then there is the small matter of the long-term NHS plan which must be developed over the summer, and the possibility of legislation associated with it.

There are other issues, too – medicines pricing, various inquiries, public health cutbacks, NHS financial performance, to name but a few. His department is an order of magnitude greater in its scope than the one he has just left.

And beyond the in-tray, there is the nature of the job itself. Being health secretary calls for deftness and tact around Whitehall, as well as an ability to navigate the way through the competing interests of Number 10, the Treasury, BEIS, MHCLG among others – which is not easy. (On social care, the Treasury doesn’t want reform to cost any money and Number 10 doesn’t want reform to upset anyone. Solutions, people?) 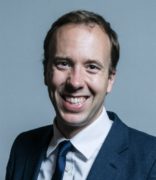 It calls for someone who can shoulder significant responsibility. It calls for an ability to withstand intense political scrutiny. On the latter at least, Matt Hancock (pictured left) should be well-equipped.

He is a protégé of George Osborne – that well-known political strategist – whose team he first joined from the Bank of England in 2006. He has the golden legacy – a funding boost – bequeathed to him by Jeremy Hunt. And industrial relations, almost always the thorn in every health secretary’s side, has been taken (slightly?) off the table by the recent pay award.

So what will he do? Little is known about Matt’s views on health, which will be unsettling to a sector that had grown familiar with Jeremy Hunt’s approach, even if they didn’t always like it.

Those seeking to negotiate the PPRS (on both sides) will need to think harder about what a new secretary of state might want. For those seeking to develop the new long-term plan for the NHS, the task just became more complicated.

The likelihood is that Hancock may not have thought much about how the service should be organised and run: very few people do, apart from perhaps the people reading this. His colleagues from days in Conservative Campaign Headquarters recall someone who was sceptical about the NHS – although was this his own opinion or his natural perspective as a member of the shadow Treasury team? He has shown distinctly interventionist leanings at DCMS too, but is he about to embrace the ‘nanny state’ at health?

In truth, we don’t yet know what his priorities will be, although usual practice for a new health secretary (or indeed cabinet minister) is to chart a slightly different course to the one inherited. We know at least that Matt shares his predecessor’s zeal for all things digital, and so that is one policy area where officials should not break step. He also shares Jeremy Hunt’s views of the potential harms caused to teenagers by social media, and will want to continue to do what he can on this from DHSC.

Whatever he does, he will find the job brings challenges. Not just in the in-tray, not just in the politics and not just because he may need time to formulate his views on what needs to be done. The simple daily grind of the job is difficult. Many issues come out of nowhere.

He must also work with big personalities: the country’s leading doctors, nurses, specialists – and of course he must find a way to rub along with Simon Stevens (surely difficult when as a new health secretary Matt Hancock will instinctively want to assert himself). And he must develop a way of working with his department, the most senior levels of which have only ever worked with Jeremy Hunt.

And this is where Matt may face challenges. Jeremy Hunt was, and is, a formidable political operator – anyone who serves as the longest-ever health secretary in an era of rolling news is undoubtedly so – and was therefore able to cope with ease with virtually everything that the job could throw at him, without too much sticking. The department may have become desensitised to this quite unique skill, and inadvertently allow Matt to find himself in sticky political situations that Jeremy could have found his way out of, or avoided getting himself in to.

Because the job of health secretary is hard, as Matt Hancock will find out. It’s just that Jeremy Hunt made it look easy.

Jack Robinson is an account director at Incisive Health