In the world of pharmaceuticals everyone seems to have heard of the National Institute for Health and Care Excellence (NICE). That’s not only because of its influence on access to medicines but also because NICE puts significant efforts into stakeholder involvement. But who is involved with the controversial technology appraisals that NICE carries out?

NICE should be lauded for providing ample ways and numerous opportunities for stakeholders to get involved with technology appraisals. It has a dedicated section of the website all about involvement. Stakeholders can:

• Be members of formal groups, including Appraisal Committees who deliberate on recommendations to make as part of the technology appraisals NICE undertakes

• Submit their own evidence – drawing on ‘how to’ guides from NICE. This is where most companies get involved directly with NICE, although some choose not to take part at all

• Attend the first part of Appraisal Committee meetings as either patient or clinical expert. Now, manufacturers can join meetings too, although their status is different and this is more an opportunity to clarify their submission and/or respond to queries from the Committee as they go through their deliberations

Hosts of people are represented on the Appraisal Committees, although the composition does change over time (figure 1). Perhaps surprising is a low emphasis on medical ethics; surely an ethical perspective is needed alongside all the number crunchers? 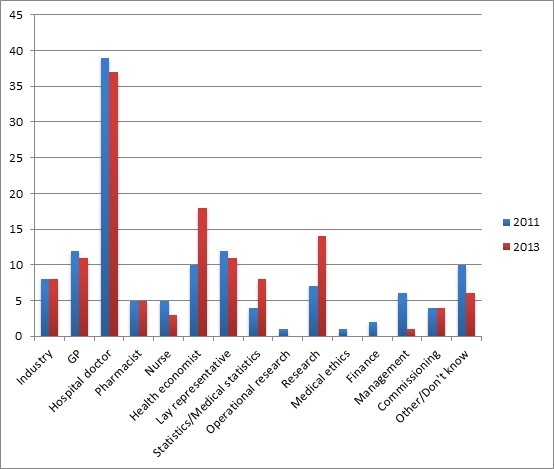 Figure 1: Number and type of expertise of Appraisal Committee members at NICE, 2011 vs 2013

NICE has put in a great deal of work to encourage stakeholders to take part too. It proactively identifies those who will have an interest in a particular technology appraisal and invites them to take part. It also runs master classes for patients, carers and service user organisations. That takes time and effort.

Though NICE puts in a lot of effort and money, there is little information in the public domain tracking how well it is doing in getting stakeholders involved. However NICE does evaluate its involvement work, with the results of a survey of patient experts who have taken part in Committee meetings expected soon. Some insights can also be gleaned from looking at all of its technology appraisals and the list of sources of evidence considered by the Committees. That is no easy task because NICE doesn’t bring this together into a single place; instead you have to go through each and every Technology Appraisal. Bringing these together does suggest that NICE’s efforts are paying off; from the 302 technology appraisals that were in date up to the end of 2013, levels of consultee involvement have improved, with a peak of over 350 organisations taking part as consultees in 2008 (see figure 2). Overall, professional organisations led the way, but patient organisations are roughly on a par with the manufacturers. However, there is a big health warning with these statistics; NICE is not very good at classifying organisations and can sometimes bundle groups in a big list rather than separating them out, or lists them under what appears to be the wrong category. 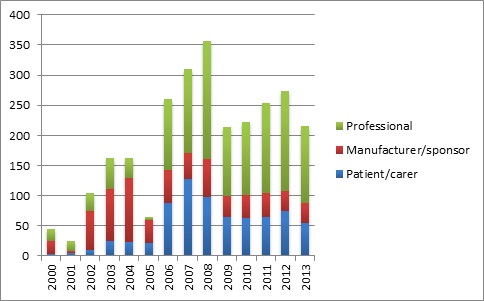 Source: Analysis of 302 final technology appraisal guidance in date up to end of 2013 drawing on information from www.nice.org.uk

Involvement directly in Appraisal Committee meetings is up too (see figure 3). 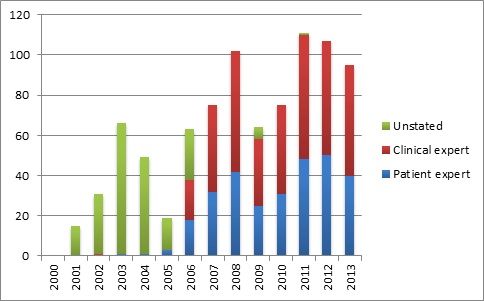 Source: Analysis of 302 final technology appraisal guidance in date up to end of 2013 drawing on information from www.nice.org.uk

You may be surprised by who tops the organisations that NICE lists as taking part as consultees (see the top 10 below). Who would have thought it would be the nurses? Roche has also been particularly busy, taking the number one spot among manufacturers. Cancer charities also feature in the top 10, mostly because NICE appraises all new cancer medicines.

4. Royal College of Pathologists     114 mentions as a consultee

So it is clear that NICE tries hard to get people involved, and it seems many organisations are willing to devote their time too. But there are still unanswered questions. Could NICE be more effective at stakeholder involvement? Could it do more to evaluate its performance? Does NICE listen to the concerns that stakeholders raise? And similar questions apply to the stakeholders too; are they convincing in what they say?

We do know, though, that ‘stakeholder persuasion’ is recognised by Prof Sir Michael Rawlins (chair of NICE up to 2012), and others, as important in ‘shaping the views of NICE’s advisory committees’. For industry, that means engaging with patient and lay groups is likely to be worthwhile; not just because it is a ‘good’ thing in and of itself, but because they can help shape the recommendations that come from NICE. That needs careful governance given concerns about the links between companies and patient groups in Health Technology Assessment. Concerns were raised only last month in relation to patient groups and the Scottish Medicines Consortium.

One thing is sure though, stakeholder involvement is here to stay and, at least in the UK, its influence is growing.

Leela Barham is an independent health economist and policy expert who has worked with all stakeholders across the health care system both in the UK and internationally. Leela works on a variety of issues: from the health and wellbeing of NHS staff to pricing and reimbursement of medicines and policies such as the Cancer Drugs Fund and Patient Access Schemes. Find out more here and you can contact Leela on leels@btinternet.com

Have your say: How can stakeholder engagement in NICE technology appraisals be even more effective?

Dr. B: Expanding the business model from COVID vaccines to antiviral medications