Ralf-Gordon Jahns explores the competitive, yet fragile landscape of mobile apps in this article in pharmaphorum’s digital and social media themed month.

65% of all time downloads from the diabetes app market are generated by only 14 app publishers. The majority are small app developers. With the exception of sanofi-aventis, Metronic and Medisana most successful diabetes app publishers are small technology companies. Some of them produce medical devices for diabetes tracking, but most of them have started their business as pure app developers with the rise of the app market after 2008. A significant number of diabetes app publishers, not only those in the top 14, have developed their solution based on their personal experience with the disease. For most of the top players the initial motivation to publish a diabetes app was to make life easier for themselves, relatives or friends – developing a sellable product came second.

The competitive landscape in the diabetes app market is still very fragile. According to a new report “Diabetes App Market 2014“, the ranking of the top 14 diabetes app publishers is not carved in stone. Today, the overall quality, total downloads and user numbers are not high or established enough to prevent new innovators from market entry. Compliance with the best practice standards for diabetes app publishing and a good marketing strategy of new entrants could still turn the market upside down. 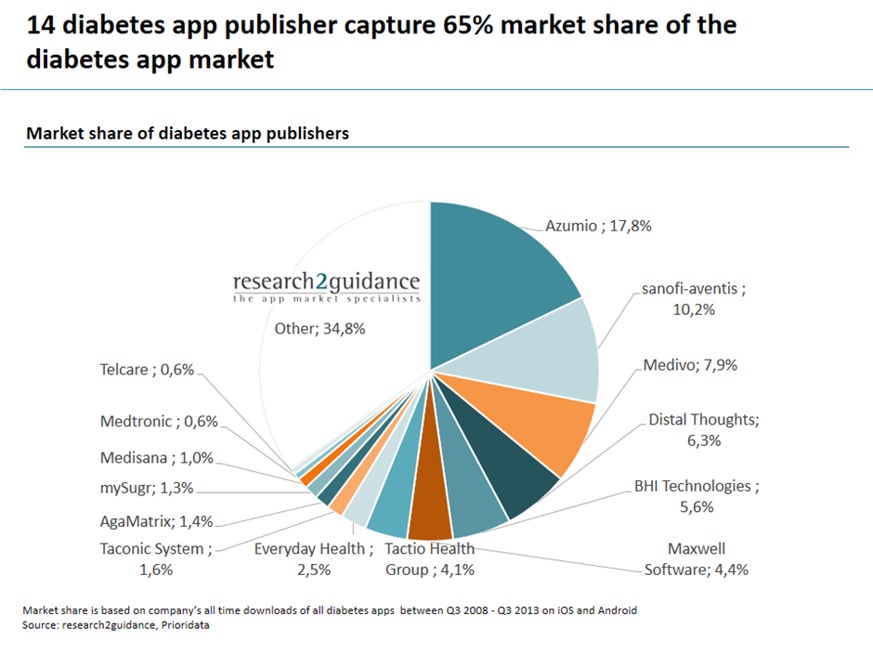 The market share is measured in lifetime downloads of all diabetes apps published by one company as a share of total downloads.

Besides Azumio and sanofi aventis, there are three diabetes app publishers with a market share of above 5%: Medivo, Distal Thoughts and BHI Technologies. All other market players have a market share of less than 5%.

Top diabetes app publishers concentrate on one mobile use case which they implement as a free and as a paid version for Android and iOS. Only few app publishers support two or three different use cases.

Diabetes is a global epidemic with a significant impact on society and the economy. In 2013 around 8.3% (382M) of the global population was estimated to suffer from diabetes. Most importantly, by 2030 the number of people suffering from diabetes is expected to double.

At present there are more than 1,100 iOS and Android specific diabetes apps available on the Apple App Store and Google Play. These apps target either diabetes patients or healthcare professionals who treat diabetes patients.

Mobile diabetes apps are currently used by only 1.2% of the target group. Although the market penetration will grow to 7.8% by 2018, even then the market potential will be far from being realized. The main reason for the low usage is a comparatively low sophistication level of diabetes apps compared with the status quo of today’s mobile apps.

“…76% of mHealth app publishers see diabetes as the therapeutic area with the highest business potential for mHealth apps.”

The main factors increasing the penetration rate of diabetes apps are:

• Development of diabetes apps from a stand-alone product to a bundle product: thus the mobile app will be a tool to sell devices like plug-in glucometers / wearable sensors) or services like remote monitoring / consultation.

• Improved diabetes app quality: with an increasing number of diabetes apps diabetes app developers will be under pressure to adopt best practices from other app models.

• Increased competition amongst app publishers: in countries with high yearly treatment costs for a diabetic patients app costs will be reimbursed by traditional payers. ,

If you are interested in mobile healthcare apps please participate in our “4th Global MHealth App Developer Economics“.

Ralf-Gordon Jahns is the managing director of research2guidance. He has worked for more than 20 years in the telecom and media industry. He is the publisher of the “mHealth App Economy Report” series and a multitude of other mHealth app market reports. He is an executive consultant of more than 30 clients in the mobile, app and healthcare industry.

Closing thought: How will the diabetes app landscape develop over the next five years?