Stay or go? The UK’s PPRS and the statutory scheme for pricing branded medicines

The latest Pharmaceutical Price Regulation Scheme (PPRS) is barely into its second year of operation but with rising payments to the Department of Health (DH) confirmed at the end of the first year, companies may now be considering their options.

The 2014 PPRS is the latest in a long line of voluntary schemes dating all the way back to 1957. At its heart the scheme has a balance between value for money for the NHS and supporting innovation. That balance comes through allowing companies to make a ‘reasonable’ amount of profit from their sales to the NHS. The deal is struck by the DH on behalf of the whole of the UK, and the Association of the British Pharmaceutical Industry (ABPI), on behalf of industry. So far, so very British.

At the same time, the 2014 PPRS lost a previous feature – price cuts – which looked to have been increasing over time (see figure 1).

Figure 1: Price cuts as part of PPRS schemes over time 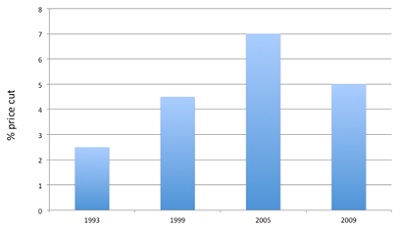 Under the 2014 PPRS what matters to each company’s bottom line is how much the branded medicines spend grows and whether or not it’s at a rate much lower or higher than companies expect. Companies pay a fixed amount to DH based on their sales; those with new products to launch only pay based on their existing portfolio. This provides a little bit of wriggle room to say that the PPRS supports innovation. But companies that don’t have new products, or won’t in the lifetime of this scheme, will end up paying for those that do.

The statutory scheme for pricing of branded medicines

The statutory scheme, as it’s currently configured, dates back to 2007 and 2008 legislation. It came in because it turned out the 2005 PPRS wasn’t quite the deal that people thought. GlaxoSmithKline (GSK) and the DH disagreed on whether they could count branded generics towards the savings that were required. GSK took it to arbitration and, when that found against it, took it’s case to the High Court, which then found in the company’s favour. The High Court judgment essentially meant that the PPRS had to be re-drawn. That left the Secretary of State with the small problem of how to manage the branded drugs bill; the result was the statutory scheme.

The statutory scheme controls NHS list prices, but not net hospital prices. There is the prospect of fines if companies are caught not complying with the rules. During the negotiations for the 2014 PPRS, the DH consulted on a price cut to list prices under the statutory scheme of between 10 and 20 per cent (higher than the price cuts seen in earlier PPRS agreements). DH eventually settled on a 15 per cent cut from 1 January 2014.

Change, it seems, abounds in both schemes. When the 2014 PPRS deal was struck back in 2013, companies were told to expect payments that did not go above 10 per cent of their sales for the life of the scheme. Of course, that was uncertain, but perhaps it wasn’t expected that by the first year of the scheme that the projections would be in the double digits (Table 1).

*Actuals, other percentages are estimates
Source: PPRS 2014 Department of Health

These figures translate into millions to be paid back to the DH, which, in turn, passes them on to NHS England and the devolved nations (see figure 2). 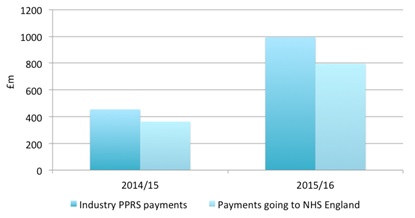 Change could happen at any time under the statutory scheme too. A further price cut, on top of the 15 per cent introduced in December 2013, was consulted on in October 2014. The DH announced in January 2015 that it wouldn’t be taking that step – at the moment. The DH has, however, made changes to allow it to ask for more information from companies subject to the statutory scheme to explore compliance, and intends to consolidate the underpinning legislation in the next Parliament.

Plus, in an unexpected turn of events, companies under the statutory scheme can apply for compensation if they had a framework agreement in place that meant prices were already lower. DH didn’t want to take Gilead on in the High Court after the company challenged the price cut under European procurement law.

Changes in membership over time

The success of the 2014 PPRS depends, in part, on whether enough companies stay in the scheme. If too many companies, especially big ones, leave it will reach a point when it just isn’t attractive to anyone to stay, although quite when that point might be isn’t clear. It is unlikely to be anywhere near that point now, with 152 companies members as at 25 February 2015, which is equivalent to around 93 per cent of the branded medicines market according to the ABPI. There is a difference, though, according to primary and secondary care; 98 per cent of the primary care branded medicines market are in, versus 87 per cent in secondary care.

Membership trends for the PPRS and those companies subject to the statutory scheme over time are shown in figures 3 and 4 below.

Figure 3: Membership of the PPRS over time 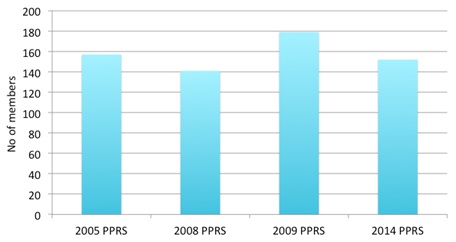 Source: Department of Health response to a Freedom of Information Request
Note: This figure gives the number of companies that were members as at the closing date of the scheme. 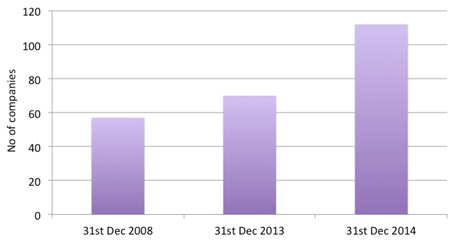 Source: Department of Health response to a Freedom of Information Request

Of course, it’s not comparing apples and apples; companies come and go in the UK market and there have been big changes in the landscape from mergers and acquisitions. Only 57 members of the 2007 scheme are members of the 2014 scheme, reflecting those changes in the market place. So this doesn’t mean that companies are leaving the PPRS in droves, but it does mean that there are a lot that find the Statutory Scheme more attractive. Perhaps it does suggest that both government and the ABPI should look carefully at how well the 2014 PPRS is performing.

The 2014 PPRS set out five objectives:

• Provide stability and predictability to the government and the industry

• Support the government’s growth and innovation agenda for life sciences.

No doubt the PPRS is delivering the second. Rarely does a government department get to point out how it’s raised billions in real cash (yes, real money, not those elusive efficiency and productivity savings that are so often talked about). NHS England and the other devolved nations can hardly complain either, with NHS England expecting almost £800 million in 2015/16. There’s likely to be debate about meeting the others.

Have your say: Which do you favour – PPRS or Statutory Scheme?

Stay calm and carry on: How to implement the updated ABPI code