Pancreatic cancer has long held the title of the “silent killer” as it is widely thought that patients do not develop symptoms until it is too late. A killer certainly, as pancreatic cancer claims the lives of 22 people per day in the UK. And it is true that the majority of patients are diagnosed too late for surgery, currently the only potential we have for a cure. But to say that patients do not present with symptoms in the earlier stages of the disease – at stages where resection could still be an option – is simply not true. The problem is that these symptoms are often vague and mimic other benign conditions.

Abdominal and back pain, jaundice, alongside significant and unexplained weight loss, are all classic presentations of pancreatic cancer. The problem is, that once these symptoms present, the disease has already become too advanced. Unfortunately, this situation is the norm and the majority of patients will experience a delay in diagnosis. Currently only 13% of cases are diagnosed through the 2-week route, with 47% presenting as emergencies through our A&amp,E system. 1

What is pancreatic cancer?

Figure 1: The location of the pancreas

Pancreatic cancer affects 8,085 people (men and women equally) in the UK every year and has one of the highest mortality-to-incidence-rate ratios of any disease, killing approximately 8,045 annually, making it the 5th biggest cancer killer in the UK. While it is less common, it is by no means a rare disease and the average-size GP practice7 is likely to see at least one case every year.8

“The problem is that these symptoms are often vague and mimic other benign conditions.”

The median survival from the time of diagnosis to death ranges from three to six months after conventional therapy for locally advanced and metastatic disease9. Relative survival in the UK is three per cent to five years (this figure has not improved in over 40 years) and has less than 17% one year survival2-6 European one-year survival rates are better than those in the UK averaging ~21% with the highest 28%.10 Poor one-year survival rates are generally taken to be an indicator of more advanced disease at diagnosis11 and if the UK were to match the best in Europe, there is the potential for many more lives to be saved.

Why has it one of the worst survival rates of all cancers?

Figure 2: Trends in survival by cancer 1971-2008, pancreatic cancer can be seen in purple

Late stage at diagnosis and chemo-resistance of pancreatic tumours are key factors as to why pancreatic cancer has some of the lowest survival rates of any cancer. But so is lack of awareness of the disease along with decades of chronic underfunding. A survey by Pancreatic Cancer Action in 2011 found that over half of all patients had not heard of the disease before their own diagnosis. Despite being the fifth biggest cancer killer in the UK, pancreatic cancer receives less than 1% of overall research funding.12

Lack of investment in research, be it clinical or epidemiological means that pancreatic cancer has a severe catch-up game to play if advances are to be made in survival – similar to other cancers over the past 30 to 40 years (see Fig.2). Sadly any advances made in laboratories today could take 10 to 15 years to translate into the clinical environment and benefit patients.

“Whilst significant progress is being made within the research environment, this will take some time to translate into improved results,” said Ross Carter, Consultant Surgeon, Glasgow Royal Infirmary &amp, President of the Pancreatic Society of GB &amp, Ireland, “the way to make an immediate impact is through the application of today’s technology and treatment at an earlier stage, and this will only be possible through earlier diagnosis.”

Earlier diagnosis is the focus of Pancreatic Cancer Action’s activities and we are currently working alongside the Royal College of General Practitioners to develop an e-learning tool designed to help GPs spot the disease earlier. Using case studies which highlight the symptoms, or groups of symptoms, which present in patients with earlier stage disease and focusing on the correct use of diagnostic tools and the incorporation of procedures for referral, we hope this tool will assist GPs in making speedier diagnoses.

“Despite being the fifth biggest cancer killer in the UK, pancreatic cancer receives less than 1% of overall research funding.”

And why do we need such a focus? Well, it may seem incredulous, but pancreatic cancer, a disease that kills nearly four times more people than die on our roads each year, does not have its own diagnostic algorithm included in the NICE referral for suspected cancer guidelines for GPs.13

So who is at risk?

Figure 3: Smoking accounts for 25% of cases and smokers have a 74% increased risk of contracting the disease

The lifetime risk of developing pancreatic cancer in the UK is relatively low at 1 in 77 for men and 1 in 79 for women.14 The aetiology of pancreatic cancer is not well defined, although there is a strong correlation with age with just under 2/3 of cases occurring in those over 70. Correspondingly, over a third of patients are age 65 years or under and these patients have the potential to be overlooked by diagnosing practitioners.

Cigarette smoking is a confirmed environmental risk factor. It is currently estimated that smoking contributes to 25% of all cases and recent research has identified smokers having an increased risk of 74% in comparison to never smokers.15 It is thought that obesity, diabetes mellitus, chronic pancreatitis, hereditary pancreatic cancer and some genetic syndromes all increase risk.

So what are the early symptoms we should all be looking out for?

Well, our e-learning module will be focusing on presentations such as new-onset symptoms which mimic irritable bowel syndrome (IBS) in patients over the age of 50, patients with dyspepsia or indigestion-type symptoms which do not respond to a four week course of PPIs such as Omeprazole, new-onset type 2 diabetes not associated with a metabolic condition, persistent itching and dark urine, persistent abdominal or upper back pain and pale, floaty smelly stools known as steatorrhoea.

“…pancreatic cancer, a disease that kills nearly four times more people than die on our roads each year, does not have its own diagnostic algorithm included in the NICE referral for suspected cancer guidelines for GPs.”

And what about treatment? 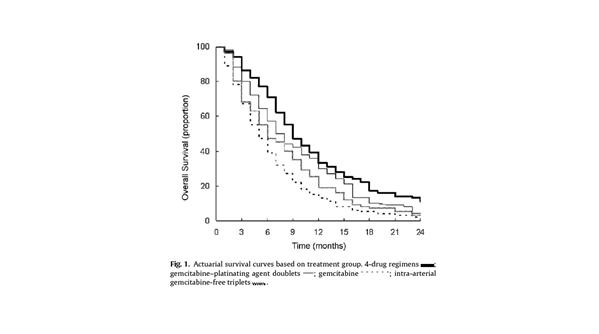 Surgical resection is still the only potential for a cure but due to late diagnosis only 10% of patients have this option.17 There have been small advances in the use of chemotherapy, especially in the use of combination therapies with three to four drug regimes (such as FOLFIRINOX) being superior to other combinations for patients with a good performance status18 Chemotherapy however is predominantly used in the palliative setting with most patients (&gt,60%)19 receiving no active treatment at all.

Radiotherapy, including chemo-radiotherapy is commonly used in the USA. However its use in the UK is subject to controversy. New technologies such as Cyberknife® (a form of stereotactic radiotherapy treatment) and Nanoknife® (Irreversible Electroporation [IRE]) are beginning to be used but, without evidence in the form of randomized clinical trials, their efficacy and safety are still unclear.

What is the future?

Recent and potentially groundbreaking work has analysed pancreatic tumours and their metastases and estimates that the time from the initiation of the tumour to metastatic spread is as long as 10 years.20 This lifetime could afford scientists the window needed for early intervention. However, in order for us to do this, there needs to be development of a reliable diagnostic biomarker, particularly one that distinguishes between pancreatic cancer and pancreatitis.

Work is already underway to measure proteins in blood and urine21 and the use of microRNAs, of which miR-200a and mir-200b have been seen to be over-expressed in pancreatic cancer and pancreatitis. Unfortunately a biomarker for use in clinic is a long way off and still needs significant research investment.

“…there needs to be development of a reliable diagnostic biomarker, particularly one that distinguishes between pancreatic cancer and pancreatitis.”

2. The Office for National Statistics: Cancer and Mortality in the United Kingdom 2005-2007 (published August 2010)

7. The Kings Fund (2009) General Practice in England: An overview

Before setting up Pancreatic Cancer Action, Ali was researching a PhD in Stable Isotope Cosmochemistry at Imperial College London.

Pancreatic Cancer Action is a national charity committed to improving survival rates for Britain’s fifth deadliest cancer through greater awareness of the symptoms of the disease, information and research funding. We simply want more people to be diagnosed in time for surgery, currently the only cure.

How can we raise awareness of pancreatic cancer?