Rise of the digital influencer in healthcare: oncology

In this first of a series of posts, Christian Gardner explains how to define and find the top digital influencers in a specific therapy area. Here he highlights those he believes are having the greatest impact in the oncology sphere.

As the amount of social media coverage of medical congresses, events and disease awareness days continues to rise, so does the role of the ‘digital influencer’.

Before I go into what makes a digital influencer and who I think the top ones are, it’s important to think about why we need them – especially in healthcare.

We know that the pharma industry has been slow to adopt social media, but I think we’re starting to see much more open and smart use of social channels now. While that is happening, early adopters in the field have naturally become influencers because they got there first.

As an industry, we need to be aware of who these people, companies and organisations are so we can see what they are saying and join in the conversation too.

But what defines a digital influencer exactly? In days gone by we’ve relied on the Klout score – a numerical measure between 1 and 100, based on all of your social networks and presence. More recently, tools such as Symplur have broken Twitter influence into three measureable areas; volume of posts, amount of impressions that their tweets are getting and the number of mentions by other profiles, discussing any given topic.

This breakdown is useful because each part tells a slightly different story. Big impressions sound fantastic – in website terms if you’re talking about page impressions in the thousands, you’re winning. But with Twitter, if you have tens of thousands of followers, simply posting a few tweets can give you impression numbers in dizzy heights, but it doesn’t necessarily mean that those tweets were engaged with and of use.

High volumes of posts show you’re a willing contributor to the conversation, of course, but again, were the tweets actually of value, or have you just been filling up the feed with spam?

“It’s what others are saying about you, rather than what you say yourself, that carries real value”

That leaves mentions, which, to me, is the most valuable and credible measure. Like good PR, it’s what others are saying about you, rather than what you say yourself, that carries real value. It also shows you’ve been involved in conversation – and isn’t that the whole point with social media?

Regardless of which of these tells the most accurate story, having a ‘top 10’ in all three is valuable. (In fact, may I make a request to the people at Symplur for a ‘top 50’ in each section against any given hash tag, especially for those with high volume like #ASCO15).

Looking specifically at oncology, you can start to track the top influencers in the field using specific hashtags, particularly for tumour types like #lungcancer and key meetings and events such as the San Antonio Breast Cancer Symposium (#SABCS14). However, having been lucky enough to attend the American Society of Clinical Oncology (ASCO) meeting earlier this year, both physically and virtually, I think the data on that hashtag gives a very current and broad view of who the top oncology influencers are.

You might argue that with ASCO being an American cancer meeting, it’s a US list of influencers. To an extent this is correct, but I would point out that the virtual nature of these meetings does, in fact, make them global, regardless of where they’re being hosted and where the medical society is based. I would also argue that the US is ahead of the rest of the world in terms of healthcare discussion on social media. This is, in part, due to the more ‘consumer facing’ aspect of HCPs and pharma there, along with cultural contributing factors in terms of a willingness to openly discuss healthcare issues.

So now we have the hashtag and data, who are these influencers and how do they break down in terms of focus area and role? Generally speaking I would split them into these groups – a method that applies to ASCO influencers as well: 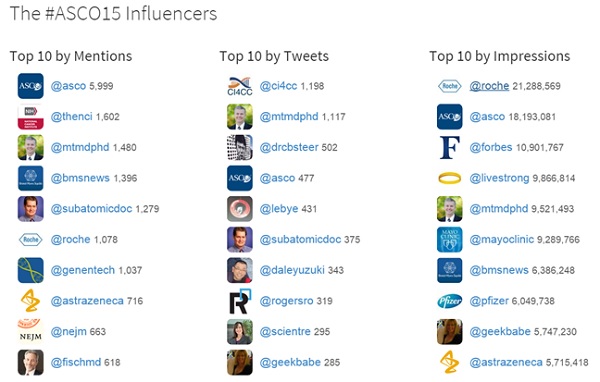 So Figure 1 is the official list, according to Symplur. In Figure 2 I have prioritised the names, based on mentions being most important and where users in that list have also featured in ‘Top 10 by Tweets’ or ‘Top 10 by impressions’ that has moved them up the list. 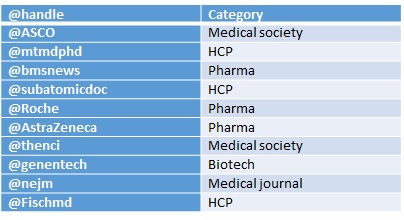 So there you have it. There are, of course, vast amounts of further influencers out there, especially in the oncology space, but based on my thinking and these specific tools, as outlined, this is a current top-10 list of oncology digital influencers.

It will also be interesting to track the #ECC2015 conversation, which is already building ahead of the European Cancer Congress, which takes place on 25-29 September.

Remember that things move quickly in this space, so regular monitoring and reviews are recommended across all channels.

Christian Gardner is Director, Media Services at pharmaphorum connect – a digital content and engagement consultancy within the pharmaphorum media group.