QR what? Reading this in a recent email from a friend of mine who I have always thought to be super switched on to high-tech and is a Psych. PhD and TV star no less – I thought I’d try and de-mystify the area.

TV star? It’s all relative. If you saw Celebrity Love Island with Fearne Cotton a few years back and remember the guest shrink analyzing the celebs behavior then not only am I about to explain Quick Recognition codes but I’ve just explained the theory of relativity too.

Because I’m a techy – I’ll start with a baffling technical explanation of QR codes. If you can survive that then we’re good to go with applications in pharma.

Imagine a printed code which could be scanned quickly with a mechanical reader. A code which holds a max (approx) 20 digits. That’s a barcode.

“A picture speaks a thousand words and a QR code encodes a maximum of 4,296 alphanumeric characters.”

The data in this barcode can be held in a QR code the size of the example below. 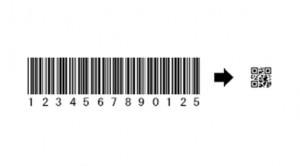 Remember the last time you waved the frozen peas at the Tesco self service checkout? In that frozen pea gesture the scanner read the barcode from left to right and charged your bill. Gesture is a modern word courtesy of Steve Jobs (RIP) and Apple’s iPad touch screen interface so I’m pleased I got that in.

NHS patient systems are used by nurses who take patient bloods and place them in sample tubes before sending to central labs. Barcodes label each tube from a printed sheet of labels. Those labels are generated from the patient database to identify the sample. The lab uses a barcode scanner attached to their LIMS matching the sample to the relevant electronic patient record. Simple, effective, and the NHS avoids laborious data entry.

It helps a lot that the patient identifier is no longer than 20 digits.

Now consider a printed code which scans not only left to right but also bottom to top, omni-directionally – meaning you can hold the scanner at any angle to the code.

This is a two dimensional code also known as a QR code. In this way a QR code is able to handle several dozen to several hundred times more information than the bar code.

A picture speaks a thousand words and a QR code encodes a maximum of 4,296 alphanumeric characters.

A QR code symbol of the size below can encode 300 alphanumeric characters. 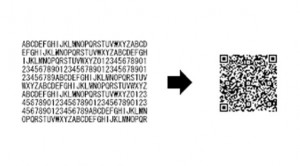 There are many specialist hardware scanners for QR codes used in areas such as supply chain and logistics.

A scanner comprises a photo-optical scanner, a decoder chip, and some software on the end to receive the scanned decoded data.

This sounds complicated but in fact many modern mobile devices such as the iPhone and even some optical mice (of the computer peripheral type) are capable of reading a QR code.

A thermal printer uses four thermal dots to make one module. Since printer resolution is measured in dots per inch (dpi) – if you use a printer with a 600dpi resolution you can create QR codes with a module size of .17mm.

“In this way a QR code is able to handle several dozen to several hundred times more information than the bar code.”

For brevity we have not covered all the QR code versions or the Reed-Solomon Code mathematical error correction which reliably reads a QR code even if damaged or soiled.

Or that under a magnifying glass you will see many small dots making the code pixilated and that each pixel is called a module. And that the small squares in the corners are position detection patterns supporting the omni-directional scanning.

How is this of relevance in pharma? Here are some examples:-.

In the US a company is promoting a product called the Glow Plug. It requires:

• A cap which fits prescription bottles.

• A light which plugs into the wall.

The light glows to remind you to take a tablet. The gateway talks to the internet and tells a website when the patient removes the cap supporting self-management and carers.

A QR code is capable of coding the dose regimen for a medicine. This can be printed on the PIL or the pack outer.

Pharma companies can create drug adherence Apps which use those QR codes. The App can scan the regimen and place reminders in the patient’s calendar to alert the patient to take a dose. Each time the patient takes a dose they rescan the pack. By presenting the pack outer to the App for each dose the App can update the regimen and silence the appropriate reminder.

The mobile is connected to the internet so it can update a central site to support carers. The App holds data for self management such as medical history. The data is encrypted, uses GxP clinical security, and the data is transient and held in a Cloud meaning it is accessible anywhere and never lost.

“The patient can log on and see trends or send the data to the physician.”

There is no hardware required.

There are opportunities for enhancement. For example the App can check for contraindications– using existing online resources such as the eMC. Data might be shared with the physician – or with the manufacturer in a de-identified format. If the QR code identifies the pack then the App can support direct-recall – something which countries such as Belgium have already implemented.

In the US, companies are promoting wireless diabetes glucose monitors. The hardware varies – a wireless internet gateway device, a glucose monitor which plugs into mobile phones, cables, blue-tooth and wireless networks. The monitor sends the data to the mobile phone. The data is sent to the internet where it is compiled on a website. The patient can log on and see trends or send the data to the physician.

A glucose monitor with an LCD screen of suitable resolution and contrast can display test results as a QR code. Pharma companies can create diabetes partner Apps which scan the QR code and add the result to the mobile patient database. If the patient opts to share data with their doctor they can do so online or in-App. The mobile is internet connected and holds data securely in a Cloud so it can be retrieved anywhere even if the device is lost. Data can be shared via the Cloud to parents, carers, medical professionals (both emergency and routine).

“QR codes are powerful because they are software. A software approach is portable, works on any device, and works with any data.”

There are many other possible applications

In a pharmacovigilance safety scenario a pharma company might track specific packs against particular patients. Register the patient using a mobile App. Only dispense if the App confirms it can scan the QR code on the pack outer. The App transmits the pairing of patient and pack to the manufacturer for monitoring.

In the drive against counterfeit medicines an encrypted micro QR code can be placed on foil packaging. Only genuine products decrypt correctly.

QR codes are powerful because they are software. A software approach is portable, works on any device, and works with any data.

The QR code is a reliable validation-ready (for GxP settings) means of passing data from one device to another.

The prevalence of mobile devices (tablets and phones) with Apps which can read QR codes is an opportunity for the pharma sector. Challenges such as securing electronic data can be solved using approaches such as PDI (perimeter-based data integrity) security, encryption, and transient Cloud data.

This article has been somewhat pre-occupied with mobile Apps and so it is fitting to close with a quote from the man who did most to make them mainstream – Steve Jobs of Apple.

Looking at the runaway success of Apple right now in 2011 it appears that he was right.

We expect to see many more innovations around visual data exchange and mobile Apps.

Nick Plank is a Director at C&amp,C Group and has been working in the life sciences industry for 15 years, providing enterprise, SaaS, and digital technology based solutions throughout the brand life cycle for branded and generic companies, delivering global, European, and UK focused projects.

The word “QR Code” is registered trademark of DENSO WAVE INCORPORATED in the following countries, Japan, United States of America, Australia and Europe.

What innovative use of QR codes have you seen in healthcare?