Putting up a united front

The “go it alone” model of developing new medicines is on its way out. Many biotech and pharma companies are collaborating to overcome the challenges they face, says PwC’s Jo Pisani.

The biotech and pharma industries have each been struggling to translate the discoveries of the past decade into safe, effective new medicines. Yet what they can’t do separately, they may well be able to do together. A growing number of life sciences firms are collaborating – with each other, with universities and charities, and with companies in adjacent sectors.

Take the way in which biotech and pharma firms are coming together. In 2011, there were an estimated 65 such alliances worth more than $20 million (see figure 1). That’s less than it was a few years ago, but some of these arrangements hint at the emergence of new business models. 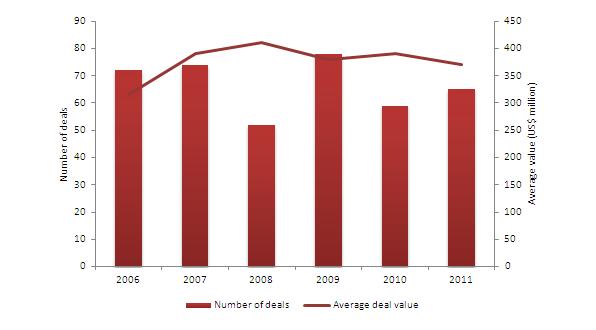 Figure 1: The number of biotech-pharma alliances is creeping up again. Sources: Burrill &amp, Co., Windhover. Note: All deals between biotech and pharma companies exceeding $20 million. Data for 2011 are projected from the figures for the nine months to 30 September 2011.

The agreement Forma Therapeutics struck with Roche subsidiary Genentech is a good example. Forma handed over worldwide rights to one of its early-stage cancer medication programmes in return for a lump sum and additional milestone payments, if it meets certain criteria. What sets the deal apart is the fact that Genentech also bought an option to purchase any resulting compound outright, rather than licensing it in and paying royalties. So, if Forma succeeds, it can deliver a return to its investors without going public or getting acquired.

Forma isn’t the only biotech exploring new ways of realising value without turning to the capital markets or a trade buyer. Quanticel Pharmaceuticals has sold Celgene an exclusive 3½-year licence to its platform for analysing genetic variations in patients’ tumours. But the $45-million package includes a stake in the firm and an exclusive option to buy Quanticel later on. So Quanticel has given its backers an immediate return, as well as ensuring it’s got capital to grow.

Co-development pacts between rival companies have become equally popular, especially in oncology. Novartis and Amgen are jointly investigating a therapy for breast cancer. Novartis has also teamed up with GlaxoSmithKline (GSK) to co-develop a treatment for advanced solid tumours. Bristol-Myers Squibb and Roche are collaborating on a melanoma product. And Sanofi’s working with Merck KGaA on a combination therapy for multiple forms of cancer.

This new spirit of cooperation is now spilling over into other therapeutic areas. In May 2011, Roche and MSD (known as Merck in the US) struck a deal to co-promote Victrelis, Merck’s new treatment for chronic hepatitis C. More unusually, the two companies also agreed to pool resources and study novel medicinal combinations for hepatitis C.

The number of alliances with academic institutions has likewise risen. Between January and September 2011, there were 30 new biopharma partnerships with academic bodies – nearly double the total for 2010 – and the pace shows no sign of slowing. In early 2012, for example, Eli Lilly signed Cambridge University up to its “Open Innovation Drug Discovery Platform”, bringing the number of participating European institutions to more than 60.

“Between January and September 2011, there were 30 new biopharma partnerships with academic bodies – nearly double the total for 2010…”

New federations to overcome shared bottlenecks in early-stage research have simultaneously emerged – one such instance being Sage Bionetworks, an open-source forum where computational biologists pool their data and brainpower to crack difficult problems. In fact, the US National Center for Advancing Translational Sciences (NCATS) has now embraced crowd-sourcing, too. Together with industry partners Pfizer, AstraZeneca and Lilly, NCATS is tapping the nation’s “brightest minds” to see whether alternative uses can be found for various compounds that have been tested in humans, but shelved.

And some companies have found friends in the charity sector. Vertex got $75 million from the US Cystic Fibrosis Foundation when it was developing Kalydeco. It will pay the foundation a share of the proceeds from all sales. Meanwhile, Amylin Pharmaceuticals is splitting the cost of testing a combination therapy for Type 1 diabetes with the US Juvenile Diabetes Research Foundation. And, in April 2012, the Michael J. Fox Foundation agreed to help Sanofi finance further testing of a product for Parkinson’s disease.

The “venture philanthropist” model, as it’s been called, is now spreading outside the US. In March 2012, Britain’s Wellcome Trust launched a fund to invest directly in healthcare and life sciences companies. Cancer Research UK has also teamed up with a European venture capital firm to create a fund for boosting the development of new cancer treatments.

“The “venture philanthropist” model, as it’s been called, is now spreading outside the US.”

Lastly, a number of biotech and pharma companies are collaborating with organisations in other industries to add value in new ways. Some examples? Proteus Biomedical has signed a deal with British pharmacy chain Lloyds Pharmacy to sell pills containing edible microchips that communicate with a monitor worn on the shoulder. GSK has linked up with technology provider MedTrust Online to launch an iPhone app that lets US oncologists search for trials by cancer type and locate the trial centres nearest their patients. And Boehringer Ingelheim has partnered with Healthrageous to pilot a digital health management service for patients with diabetes.

In general, then, the last few years have provided grounds for hope. Using the insights the molecular sciences have provided to create good new medicines may be a formidable challenge, but the biopharma community is putting up a more united front. And, as Henry Ford once noted, “Coming together is a beginning, keeping together is progress, working together is success”.

Some previous articles by PwC:

• Attention pharma: where do diagnostics fit in your future strategy?

For a more detailed discussion of these trends, please see, “Biotech: What’s next for the business of big molecules?” http://www.pwc.com/pharma

Are collaborations the way forward for pharma?