Medical congress meetings have always provided opportunities for pharma companies to connect in person with doctors and other stakeholders, but in today's age of social media engagement, the most innovative are using congress meetings to extend this well beyond the meeting through digital engagement. Indeed, the online reach of the largest congress meetings is global, as virtual participants all over the world listen in and join conversations about congress content via social media.

As one doctor told me, "If I can't get to EASD [the European Association for the Study of Diabetes annual meeting] this year, then I'll just follow it on Twitter". And in a study of 78,000 social media posts shared during this year's American Society of Clinical Oncology (ASCO) congress, 35 per cent of content was posted from outside Chicago, the US city where the congress took place.

It makes sense, therefore, that pharma companies would want to leverage the increased online interest in a particular therapy area sparked by a medical congress meeting. Some companies are doing this particularly well, providing useful case studies of current practice.

The three most engaging social media posts from pharma companies at ASCO illustrate the different kinds of tactics employed by Boehringer Ingelheim (BI), Bristol-Myers Squibb (BMS) and Novartis. Tweets from these three companies achieved more replies than any other pharma company sponsoring ASCO, and the most-shared, from BI, was retweeted more than 500 times. Meanwhile the most-shared URL overall at ASCO was a link to Novartis' ASCO oncology portal website, illustrating how the company leveraged online interest in oncology during the event to drive traffic to its digital assets.

Let's look at the three tactics employed by these companies in their most engaging tweets. Note that these are not the only social media tactics that the companies used at ASCO, but they provide some useful examples. 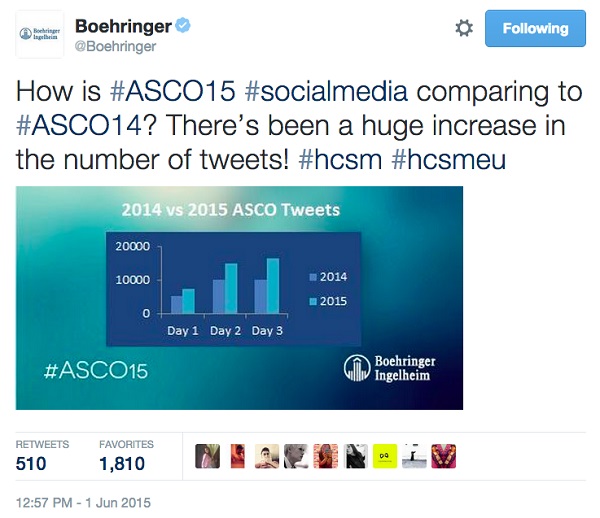 In the tweet illustrated here, BI simply talks about social media at ASCO, using a visual infographic and the congress hashtag #ASCO15. The tweet naturally engages people who have an interest in social media and ASCO, and provides a friendly way for people to connect with the company without any directly commercial messages.

Note that BI also included hashtags for other conversations and online communities that it takes part in such as #hcsm, the healthcare social media movement, and #hcsmeu, the European equivalent, to ensure that the tweet achieved plenty of reach among people with relevant interests outside of ASCO. This is not an uncommon tactic for BI, which uses a diverse range of topics to build a relationship with followers, and then leverages those followers in messaging about health and therapy areas. 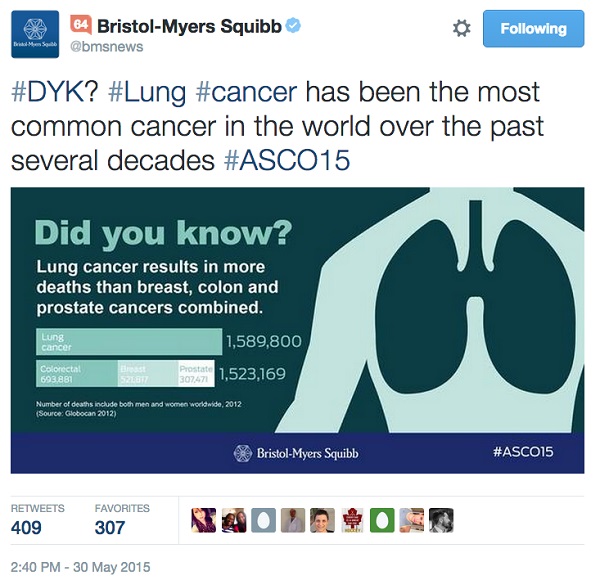 BMS's tweet illustrates a more direct therapy-focused tactic, well targeted at people with an interest in cancer as part of the ASCO conversation. Like BI's, the tweet included a shareable graphic and made use of a number of hashtags, such as #cancer to ensure visibility among people with relevant interests.

While not directly commercial, the tweet did focus on a therapy area of interest to BMS, potentially enhancing the company's association with lung cancer among oncologists and other interested stakeholders listening to the ASCO online conversation. 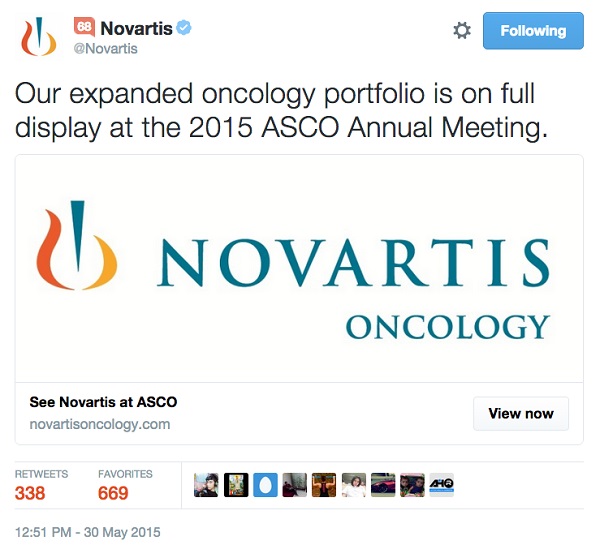 Novartis promoted its oncology portal with a series of Twitter cards

The final example, from Novartis, is one of a number of tweets posted during ASCO which the company promoted using Twitter cards. Twitter cards allow companies to place paid-for tweets into relevant conversations targeted at people with particular interests, and include a call to action, as seen in the 'View now' button in the one shown here.

Paid advertising such as this can be a quick way to gain exposure and drive traffic. It may not always provide the depth of engagement and corporate relationship in the long term that can be achieved through a more 'social' strategy such as that of BI, but for short-term, focused messaging it certainly worked for Novartis at ASCO.

Daniel Ghinn is CEO of Creation Healthcare, a consultancy specialising in developing social media insights from conversations among healthcare professionals. He tweets at @engagementstrat.

Read more from the Pharma gets social series: