Regulatory approval is still a critical step in getting a drug to market, but it no longer guarantees market access. With growing emphasis on cost-effectiveness analysis and economic modelling, recommendation for reimbursement is now the second hurdle to gaining entry in many countries. The authors describe how rethinking the importance of the components around clinical-trial design and their implications on reimbursement can save resources and expedite the path to a successful drug launch.

The breadth of clinical trial data applicability is expanding, informing an increasing number of decisions along the path to market access. In the past, results from clinical trials were used for one goal: regulatory approval. With regulatory approval came assurance that the drug was deemed safe and efficacious by the governing bodies (FDA, EMA). This approval paved the way for a new market entrant and the concomitant sales and marketing efforts to drive adoption.

Today that is no longer the case. Regulatory approval is still a critical step in getting a drug to market, but it does not guarantee market access. In many countries, the next goal following regulatory approval is recommendation for reimbursement. The same clinical trial data used to demonstrate safety and efficacy for regulatory approval is used in a dossier submitted to a Health Technology Assessment (HTA) agency, a dossier that compares the new drug to the current standard of care, or the current drugs in the marketplace. The HTA process is not confined to clinical comparative effectiveness. It also includes a cost-effectiveness analysis, which is used in final price negotiation and determination.

How then does one begin to design a trial with the knowledge that the data collected will be used to clear not one, but two hurdles downstream – hurdles with different sensibilities? Is there an opportunity for improvement in the planning and design of these clinical trials? We believe the answer is yes.

“Regulatory approval is still a critical step in getting a drug to market, but it does not guarantee market access.”

We systematically track the numerous components included in HTAs across the world in the form of standardized variables. By looking at the data from both the regulatory and reimbursement domains side-by-side, we have identified opportunities for improvement in clinical trial planning and design.

As such, we have revealed the gap between outcomes evaluated in clinical trials and outcomes valued in HTA reviews. Not surprisingly, it varies not only across the globe, but also across disease conditions. For example, last year we completed a case study that explored this gap between outcomes evaluated in clinical trials and in HTAs for Multiple Sclerosis (MS). We compared clinical outcomes for MS drugs from 18 HTAs from 2006–2011 across six agencies (CADTH, DERP, HAS, NICE, PBAC, and SMC) and 37 Phase III clinical trials from 2012.

“A commonly used rationale for rejecting a drug for reimbursement is low or uncertain cost effectiveness or a poor economic model.”

We noticed that clinical trials looked more often at laboratory results and fatigue, as well as a broader range of outcomes including pain, bladder control, depression, sleep, and vision outcomes. HTAs were three times as likely to consider disability progression and relapse, and twice as likely to measure improvement compared to clinical trials. However, clinical trials and HTAs considered quality of life and adverse events with similar frequency, 8–10% of the time. 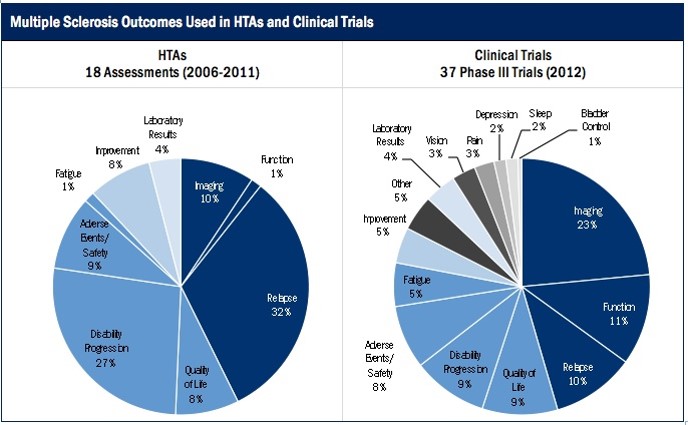 While this case study on outcomes is just one example, it is important to ask whether clinical trial designers should consider longer-term implications when determining both those outcomes to focus upon, and also what outcomes may not be as useful or important.

The results of these trials don’t simply prove clinical efficacy or effectiveness for regulatory approval; they are also used as the basis of the economic models submitted in the dossier to HTA agencies. A commonly used rationale for rejecting a drug for reimbursement is low or uncertain cost effectiveness or a poor economic model. Looking at the rationale behind reimbursement recommendations can begin to shed light on the most valuable components of a successful dossier.

An effective cost-utility model includes information that is most relevant to the real-world usage of the drug. Variables such as the treatment population, utility values, comparator, and treatment duration all play a crucial role in the results of an economic model. Incremental Cost Effectiveness Ratios (ICERs) and Quality Adjusted Life Years (QALYs) can be highly sensitive to changes in model inputs. Even if the manufacturer constructs a model that shows that the drug is cost effective, HTA agencies are very particular about the transparency of the assumptions and components used.

“A well-designed trial that incorporates all the right variables will push a drug through both regulatory approval and recommendation for reimbursement faster and with more ease.”

Another commonly used model, cost-minimization, compares the direct costs of a drug under review to another drug, assuming that the drugs have equal efficacy and tolerability. In this type of model, the drug is shown to be more cost effective if it has a lower price since the two drugs are assumed to be clinically equal. Sometimes the assumption of equal efficacy and tolerability is incorrect, however, and even though the drug under review has a lower price and a seemingly valid claim of higher cost effectiveness, the results of the economic model have no value if the clinical trial has been poorly executed.

Improved clinical trial planning and design can save resources of time and money as well as increase efficiency. It is worth pressure-testing clinical-trial design with the knowledge that the results of trial will be used to support clinical efficacy and cost-effectiveness claims. A well-designed trial that incorporates all the right variables will push a drug through both regulatory approval and recommendation for reimbursement faster and with more ease.

Yin is the Founder and CEO of Context Matters Inc., a start-up healthcare information and data analytics platform company based in NYC. A licensed physician trained in emergency medicine, Dr. Ho left the practice of medicine to focus on the emerging eHealth sector. Prior to founding Context Matters, she was vice president of corporate strategy at Medidata Solutions (MDSO) – a global clinical trial software company – and was part of the executive team that took the company public in mid-2009. She has also held senior positions at Pfizer (PFE), leading initiatives and investments in eHealth, including electronic health records, electronic prescribing hubs, evidence-based medicine/comparative effectiveness policies, physician-payer relationships, and medical public policy. Yin has also served as director of business development at Emergingmed.com, an e-clinical trial company focused on cancer patient recruitment and advocacy, and a member of the advisory board of RapidTrials, Inc, which is focused on accelerating clinical trials through optimizing clinical investigator performance.

Yin is a dedicated New Yorker who is personally committed to making NYC a recognized capital of healthcare innovation. She co-founded NYC Health Business Leaders and is affiliated with numerous associations, including the American College of Emergency Physicians and the eHealth Initiative Leadership Council.

Yin received a BA from Brown University, MD from Yale University School of Medicine, and MBA from Harvard Business School.

Rachel Jao is starting her third year at Context Matters as the Associate Director of Data and Analytics. She received her Masters in Public Health from Columbia University with a specialization in Effectiveness and Outcomes Research. Prior to that she studied Biology and Economics at the University of California in San Diego where she did research in marine biology. With experience in Health Technology Assessments, her interests lie in the kind of effects clinical and economic inputs have on reimbursement decisions.

Closing thought: How can clinical trial planning and design be improved?