With Russian now in the top 10 of all languages spoken on the internet and several Eastern European countries increasing their online presence, this region still shows promise for pharma companies who understand the market, despite turbulence in some economies recently.

The growth rate of local economies in former Soviet Union (FSU) countries, together with a general improvement in living conditions and relatively stable political environment, have made the pharmaceutical markets of these countries attractive for many global manufacturers in recent years.

However, in 2014-2015, the region’s major oil exporters, such as Russia and Kazakhstan, were hit by an oil price drop and currency devaluation. Countries less dependent on the oil trade, including Uzbekistan, Kyrgyzstan and Armenia, continued to show growth in pharmaceutical sales. According to IMS, pharmaceutical market growth in 1H 2015 stood at 11% for the region, but shrank in volume (-7%). Nevertheless, compared to European pharma markets, it is still developing quite dynamically.

Russia has the largest pharmaceutical market among FSU countries. It stood at 1.152 billion RUB by the end of 2014 and ranked among the top 10 pharmaceutical markets in the world. Despite the current political and economic instability, major international pharmaceutical companies have continued, on the whole, to pursue their plans for business development in the region. However, a decrease in the consumption of medicine and healthcare budget deficits have pushed them to change their marketing strategies. In Russia and other FSU countries, pharma companies still rely largely on traditional promotional methods. However, this year has seen a major shift towards digital promotion as more and more consider significant investment in their online presence.

Since the healthcare systems in the majority of FSU countries are quite underdeveloped, patients in these countries are often the primary buyers of drugs. As a result, pharmaceutical markets come largely from the private sector, rather than public purchasing. In Q1 2014, for example, private sector pharmaceutical sales in Russia accounted for 72% of the market, according to a DSM report.

As highlighted by IMS research, doctors’ advice still remains the most influential source of information for patients in FSU countries, yet online verification provides them with more confidence. A survey conducted by Rambler Top100 found that nearly 40% of patients double-check their doctor’s recommendations online, in addition to searching the web for medical conditions and lifestyle tips. These figures suggest that marketing and sales performance of pharma companies depend on their ability to engage with both patients and physicians online.

FSU countries have experienced substantial growth in the digital area over the last decade, yet a clear divide remains between the more technologically advanced countries – notably Russia, Azerbaijan and Kazakhstan – and those where progress has been slower, such as Kyrgyzstan. Russia’s internet uptake is above the regional average, but it is still below the penetration levels of Western Europe and the US. In contrast, the Baltics, which have a large population of Russian speakers, have a much more developed internet audience. 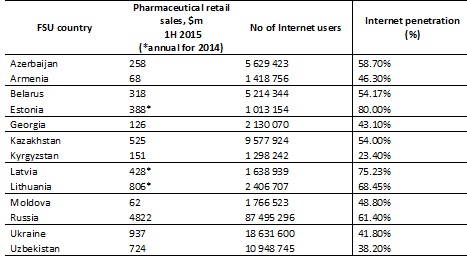 Nowadays digital marketing tools facilitate interaction with Russian-speaking audiences worldwide. The Russian language is now in the top 10 of all languages spoken on the internet. According to the Russian Ministry of Foreign Affairs, the Russian-speaking internet audience totalled more than 270 million people in 2014, taking into account not only Russia but also Russian-speaking users in FSU countries, Western Europe, Israel and North America. Such a vast internet community is a robust market for digital communication and services. Therefore, the promotion of international brands should not only focus on the Russian market per se but also on the entire Russian-speaking audience living in CIS countries, Europe and North America.

The first step to developing a digital campaign for a Russian-speaking audience is to translate content into Russian. However, neither high-quality localisation, nor previous campaign success in North America and Europe guarantees a successful campaign for Russian-speaking audiences. This is mainly due to the extreme diversity of Russian internet users, both on a consumer (patients) and professional level (physicians). The Russian internet aggregates people from various educational, age, income, and ideological backgrounds. As a result, individuals tend to use different websites and social media platforms to communicate with their peers or stay up-to date-with the news. Furthermore, the same people may even demonstrate different behavioural patterns on different portals. It may seem that healthcare-focused websites offer relatively similar functionality and content, but in fact each has its own specific relationship with its particular audience.

Moreover, on a professional level, it should be noted that there is a significant difference in the way physicians in FSU countries and their colleagues in Europe and North America approach various medical conditions, particularly in terms of medical protocols and clinical practices.

As digital tools become a larger part of pharma marketing for companies with Russian-speaking audiences, insights into content development, localisation and the selection of appropriate digital channels for a campaign become a focal point for the creation of successful marketing strategies for pharmaceutical brands.

Oxana Kolosova is managing partner at iVrach.com, a professional network for Russian-speaking physicians. Doctors from Russia, Ukraine and other countries meet online to share knowledge and information on latest developments in the field of medicine. It works to enhance physician-to-physician interactions and facilitates effective dialogue between the HCP community and the industry by applying emerging web trends and technologies.

Read more on the Russian market: