Year-ends prompt reflection, both on what’s happened in the last 12 months and on the year ahead. At the beginning of 2019 European Thought Leadership published “Nine for 2019”, a set of predictions for issues that would be key in 2019 and trends we felt would intensify during the year. Our predictions covered regional and country issues, corporate and competitive challenges, and new technologies, set out in graphic 1 below. 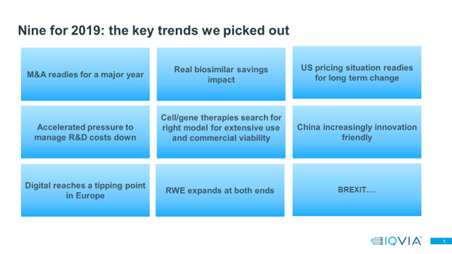 Reviewing these trends, we believe our prediction scorecard finishes the year with more hits (or near hits) than misses.

Let’s turn to the hits. We predicted that 2019 would be a year of major M&A, kicked off by BMS Celgene, and we were not disappointed. BMS Celgene is now officially approved, making the world’s ninth largest company in total Rx sales by IQVIA data, and the second largest oncology company.

Abbvie announced it would purchase Allergan, creating what will be, when the deal goes through, the world’s largest company by IQVIA measured Rx sales. And, in the opposite direction, Pfizer plans to demote itself from being the world’s largest pharma company to number 16, by divesting its portfolio of older and off patent products to Mylan and becoming a far leaner, specialty portfolio entity. The Mylan/Upjohn entity will rise to become number eight.

Other smaller, but still significant acquisitions in 2019 showed big pharma making bets on the future success of the pipeline – most recently Novartis’s proposed acquisition of the Medicines Company, which continues the revival of its cardiovascular portfolio in an innovative new shape. Verdict: hit

We also predicted that 2019 would be the year when biosimilars really took off – and indeed our detailed analysis of adalimumab biosimilars showed that real savings are being generated from the LoE of Humira in Europe. Since their launch in October 2018, though to September 2019, adalimumab biosimilars have seen list price sales of $725 million in the EU and Turkey. What was less expected was the success of some biosimilars in the US – a market that has been slower to take off. However, as of September 2019 data, it is clear that Udenyca, a biosimilar Peg-Filgrastim, is the biggest launch of 2019 in the US, with $274 million of sales so far, and, since it is $162 million ahead of the nearest follower, it is likely to be the best selling launch of the year, well ahead of Abbvie’s new immunological, Skyrizi. Verdict: hit

On the innovative side of the business, we predicted that 2019 was the year in which the new Advanced Therapeutic Medicinal products, led by cell and gene therapies, would truly gain traction. Company reported sales of the four main cell and gene therapies, Yescarta, Kymriah, Spinraza and Zolgensma, were collectively $2.2 billion in the first three quarters of 2019, with Spinraza, at $1.5 billion the most successful.

Cell therapies have disappointed analyst expectations, especially for Kymriah, faced with manufacturing problems Novartis is working to resolve. Gene therapies, on the other hand, have delivered the ATMP sector’s first blockbuster. Our belief is the slowness of this sector to take off is not unusual – pharma is littered with examples of new markets that were tortoises rather than hares – and we rate this prediction as a work in progress not a miss. Verdict: near hit

China also saw some very significant events, harbingers of a new approach to innovation. In addition to the ramp up of approvals from the reformed regulator, the CFDA was subsumed into a larger State Administration for Market regulation (SAMR) with a much, much broader remit, in 2019.

A few approvals made global headlines: first the approval of a locally-developed Alzheimer’s treatment, Oligomannate, from Shanghai-based Green Valley Pharmaceuticals. While this approval was met with scepticism on the data, and has yet to be submitted to the US FDA, the Chinese company BeiGene got its Lymphoma treatment Brukinsa approved in the US in November 2019.

Approvals are one thing, paying for these products another – the other reason to believe China has reached an inflection point on innovation uptake is the updated drug reimbursement list, including 70 new medicines announced as entering the list in November 2019, on top of 148 added in August 2019. To enter the list, companies have agreed to deep average discounts, but volumes have the potential to be high. Verdict: hit

Lastly RWE expanding at both ends – that is, into the hard science end of genomics and the softer, less structured realm of patient device generated data – was a strong trend for 2019. Key areas of activity were the evolution of partnerships and trusted models, with the development of standards for information exchange and evaluation, and, between pharmaceutical companies, the development of competitive benchmarking to evaluate the real competitive impact of RWE investments. Verdict: hit

There were some trends and issues we called out where little changed in 2019, although we still believe the issue to be significant in the longer term. The US pricing debate continues to be talk not action, but rival policy proposals were aired by Republicans and Democrats, and the pharmaceutical industry has weighed in. The role of ICER, a private Health Technology Assessor, in shaping the US pricing debate is increasingly apparent. The fact that 2020 is an election year in the US means that pricing discussions will intensify in 2020 and then potentially be actioned by 2021. This trend does not disappear. Verdict: near miss

The pressure to bring R&D costs down also does not disappear, not least because it is a component of the US pricing debate, but also because research and development in efficiencies remain so blatantly obvious. Each year, the data and technology to design clinical trials more effectively, recruit in a faster and more targeted manner, and reduce process cost and time, improves. Verdict: ongoing trend

We predicted the digital tipping point for promotional communication to healthcare professionals in Europe in 2019 – that is the point at which digital supply met digital demand. We saw progress on digital, but the tipping point was not met – in three out of five countries there is still more demand from HCPs for digital communication that we see being met by the multichannel promotional campaigns of pharmaceutical companies. The trend, however, is such that this tipping point will be reached – will it be 2020 rather than 2019? Verdict: ongoing trend

Finally, the big miss – despite the preparations and the promises of politicians, the Brexit deadline was missed not once but twice in the course of 2019, and the UK is ending the year with a General Election, the outcome of which determines whether Brexit happens, and if so what type of Brexit at what speed. For the pharmaceutical industry Brexit’s issues remain the same, with the addition of a growing row over the potential impact of post-Brexit US trade negotiations on UK pharmaceutical prices and access – a row which at present is more political heat than fact-based light. Brexit will still be a major source of uncertainty for 2020, but we will not include it as a new issue or trend in 2020 vision. Verdict: miss 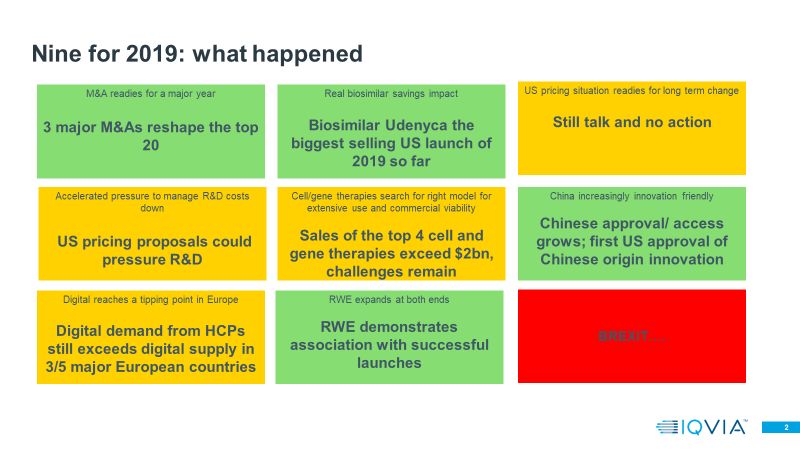 2019: Harbingers, inflection points, or more of the same?

Unsurprisingly for an extremely complex and diverse industry, for pharma 2019 was a mix. Two out of three truly significant regional inflections (Brexit, US pricing) were postponed. The other regional change, Chinese approval and uptake of innovation, has ignited.

From a pharmaceutical company functional perspective, R&D reform, RWE expansion, and the reshaping of promotional mix toward digital continued to make significant strides. In the market, biosimilars made huge strides, cell and gene therapies patchier progress. It’s worth noting that this biosimilar “overnight success” story has in fact been in the making since 2010 in the US and since 2005 in the EU. Cell and gene therapies may find their own overnight success has a similar lag.

Lastly, M&A in pharma is always a wild card, one that was played for high stakes in 2019. Only one of the three M&As, BMS Celgene, has been completed, the others will complete in 2020, when the real impact of these industry reshaping moves plays out. 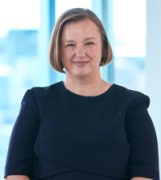