After two giddy years of continuous growth, biotech got a rude awakening in late 2015, but many remain confident in the sector’s growth potential, writes Andrew McConaghie.

After two successive record-breaking years on both sides of the Atlantic, the biotech sector fell back to earth in late 2015.

Such was the ever-upward surge in biotech stock valuations and deals, many had feared biotech was experiencing another market bubble, and this prediction seemed correct when companies saw billions wiped off share prices last year.

This had been precipitated by the threat of price controls from Presidential hopeful Hillary Clinton in September, and then by fears of a global economic slowdown thanks to China’s stagnating growth.

But there are many who remain bullish about the long-term prospects of biotech – not least because of pharma’s need for new drugs to refill its pipelines, and the hugely exciting science emerging from laboratories.

The last few years have seen a bonanza for biotech companies looking to raise finance and do deals, with initial public offerings (IPOs) for new companies, follow-on and venture capital funding for private and listed firms rising to new heights.

But the big public investors have been spooked by the unpredictability of the sector, which is deterring up-and-coming biotechs from launching IPOs.

Nevertheless, yesterday in London at BioTrinity, one of Europe’s leading investment and biopartnering conferences, biotech sector investors and analysts were generally upbeat.

Ian Oliver of EY gave the conference a preview of its annual number-crunching ‘Beyond borders’ report on the sector. He said its dip was ‘inevitable’ but he was reasonably sure it wasn’t a permanent shift in sentiment.

“After biotech’s record financial harvest over the last two years, the inevitable IPO winter has arrived, and there are numerous signs that public capital is becoming more scarce – hopefully on a temporary basis.” 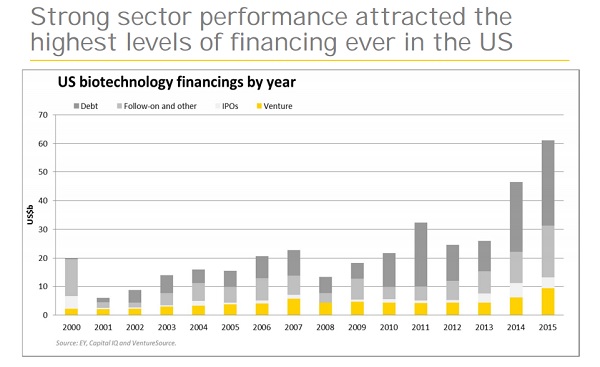 Figure 1. US biotech financing. Source: EY Beyond borders 2016 industry report.
Data collated by EY show that 78 biotechs went public in the US in 2015, more than twice the annual average of the last 15 years, and biotechs raised $5.2 billion, down from 2014 but still the third-highest-ever total.

In Europe, 33 companies went public in 2015, one less than the previous year, with total funds raised standing at $1.4 billion, down from $1.9 billion. 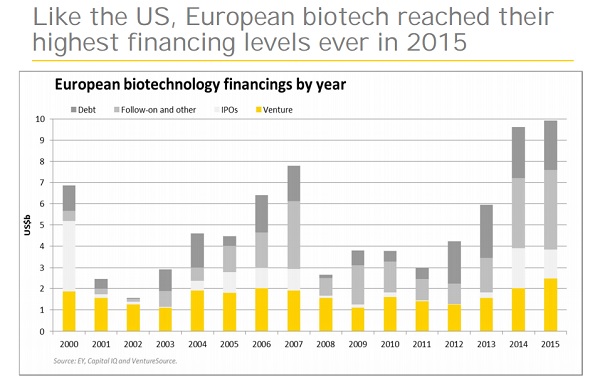 Oliver said the question was not if the climate is changing, but rather how long this IPO winter will last.

“After 11 quarters of record IPO activity in which $15 billion was raised, alongside some general economic and political uncertainty, a pause in the wide-open window was to be expected.”

Some companies are bucking the trend, but they are having to work harder to secure a public listing.

Jim Mellon, the serial entrepreneur and investor, was at BioTrinity yesterday to talk about SalvaRx, another new immuno-oncology biotech, which floated on the London-based AIM in March.

This was achieved through a reverse takeover of 3Legs Resources, a former Polish shale gas exploration company, which has switched sectors with backing from Mr Mellon. This novel approach was combined with SalvaRx’s acquisition of a majority stake in science innovator iOX Therapeutics – the University of Oxford spin-out developing novel agonists to activate iNKT cells. These are just one of many new promising classes which promise to be the next-generation treatment of immunotherapies to follow the now-ascendant PD-1 checkpoint inhibitors.

“At a time when pundits were claiming the UK biotech IPO window was hermetically sealed, we’ve got our immuno-oncology vehicle SalvaRx away using an innovative approach,” said Jim Mellon ahead of the conference, where he discussed his ‘Vision for Biotech 2030’ and views on access to capital.

While IPOs are looking risky, 2015 saw a huge surge in funding for privately-held biotechs.

Figures from EvaluatePharma show that private drug developers raised a staggering $8.68 billion, up 19% on the previous year and the biggest annual total since at least 2007.

In the UK, the stand-out company was Immunocore, which raised $320 million in 2015 in venture funding in July 2015, the biggest ever for a European biotech.

It has a ‘twin’ company spun out of Oxford University at the same time, Adaptimmune. It raised $191 million in a Nasdaq listing earlier in the year. Both companies have highly promising immunotherapy platforms, and their divergent strategic approaches shows that biotech firms have fundraising options from which to choose.

No company has come close to these levels so far this year, however. One of the biggest has gone to a preclinical-stage company, Cambridge University spin-off Mission Therapeutics. It raised £60 million ($87 million) in February to develop its first-in-class treatments targeting deubiquitylating enzymes (DUB) further, which have potential therapeutic targets in cancer, neurodegenerative syndromes, muscle wasting and infectious diseases.

The £100 million ($146 million) fund raising announced by Imperial Innovations in February is significant not just because of the amount but also because it got away at all in such a tumultuous biotech market.

While 2015 is likely to be a peak year for some time to come, many believe that the engine for continued deals and fundraising hasn’t gone away.

Oliver agreed that the compelling science emerging from the sector, and pharma’s hunger for new products, will sustain growth.

“That biotech M&A momentum will continue despite the pullback of public investors,” he commented.

Another notable trend in the 2015 figures was the growth in deals between biotech firms. Oliver said this suggested big biotech companies were now powerful enough to compete with the pharma giants in the deal-making arena.

The most notable example of this in Europe is Shire, which agreed a $32 billion takeover of fellow rare disease specialist Baxalta in January – and doesn’t look to have finished with M&A yet.

While this suggests that large-cap biotech is in rude health, Oliver pointed out that there was another way to look at this phenomenon:

“Big biotechs have been saddled with the same challenges that have made big pharma such avid deal makers in recent years.”

Germany and the pharma industry: seeing eye to eye at last?

And then there were three; ex-Merck CEO Ken Frazier joins Eikon