In the mercurial online world, it is difficult to keep track of the impact of key influencers, including patient opinion leaders, and whether the information they are sharing is correct. Chris Dobson believes ongoing monitoring using network science is the answer.

For those who have not heard of Dave deBronkart – or ePatient Dave as he is known professionally – he is a cancer survivor and full-time Patient Opinion Leader (POL). He has over 25,000 Twitter followers, is a regular blogger and has written at least one book about his cancer battle in his dedication to ‘revolutionising the relationship between patients and healthcare providers’.

A quick glance at Dave’s website reveals the extraordinary commitment he has brought to his role. He has developed partnerships with providers and refers to his activism role as ‘a calling’. He writes with authority, sensitivity and has a passion to do good.

Dave is one of a growing number of voices that are bringing sweeping change to the pharma sector. The digital revolution of the last 10-15 years has opened up a wealth of information in a way that was undreamt of a generation ago. Even more recently, social media has created the ability to share, spread, promote, endorse or comment on information in ways that are redefining individual and group behaviour.

• 87 per cent of US adults use the internet;

• 72 per cent of US internet users have looked up health information online within the last year;

• 58 per cent of US adults own a smartphone, half (29 per cent) of whom have used their devices to look up health information;

• 24 per cent of adults got information or support from others who have the same health condition;

• 26 per cent of internet users have read or watched someone else’s experience about health or medical issues in the last 12 months.

Greater accessibility (to data) and connectivity brought by the Internet has transformed the mind set and behaviour of patients. The central role of the physician has been augmented by other channels of information, often initiated by sufferers or survivors of the same condition as those searching for information. We have entered the age of the POL.

The Patient Empowerment Network says that a POL: “…first of all, is a leader: a leader in information and a leader in relaying that information to others”, but stresses that “…a POL is more than that. These patients have the passion to learn more about their illness and the passion to spread that knowledge.”

As POLs grow in volume and reach, so does their influence. Many are now recognised and endorsed by physicians and/or pharma companies, cited for their role in opening up debate in a sector that was relatively closed and characterised by a one-way flow of information.

At the same time, however, the age of the POL has brought a seismic challenge: how to track influence in a fully networked world and ensure that opinion is not misinterpreted – or deliberately interpreted – as medical fact.

Not all POLs are as responsible and diligent as ePatient Dave. He and others similar to him are relatively straightforward to monitor, regulate and engage with. Many influencers, though, may not even consider themselves POLs. And therein lies the rub.

“In a completely fragmented but connected universe, opinions, intrigue, gossip and worse can be shared instantly far and wide”

In a completely fragmented but connected universe, opinions, intrigue, gossip and worse can be shared instantly far and wide. How and why patients are influenced by what they hear and read is not yet an exact science. Emotion, timing, relationship with the provider – all these and more have a bearing on how an individual is impacted by, and responds to, information.

I believe that the industry needs to adopt a much more scientific approach to understanding, measuring, tracking and (if necessary) curbing how and via whom patients are influenced. And, given the dynamic nature of influence, which fragments, changes and pivots constantly, this should be a continuous commitment to fully understand patients’ motivations.

For many, the answer lies beyond traditional relationships with patients’ associations (which remain critical and valuable) in network science.

In layman’s terms, it is possible to analyse social media, blogs, forums, etc. online and monitor exactly who is influencing who and on what basis. Tracking this over time enables healthcare providers to engage with influencers and, of course, to attempt to correct any spreaders of misinformation (the negative impacts of which have perhaps been most famously highlighted around the child vaccination debate).

The concept of POL mapping is not new, but not everyone is using network science in their approach.

Challenge: identify parameters and influencers in the online debate about and opposition to HPV vaccination 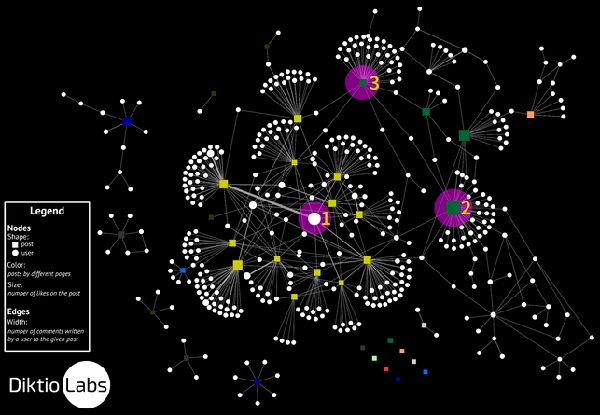 Figure 1: The network of posts and users

Figure 1 shows that there is a user (1) who has been commenting actively on the page marked in yellow, and whose comments receive a great number of likes by other users as well. This person is a key opinion leader in the examined community. The post on the right on the page marked in green (2), which did not receive an outstanding amount of comments but gained many likes, is most likely the type of content the page’s active readership is open to. There is also a post (3) on this page, which, although it received fewer likes, generated the same number of comments. This is probably a controversial entry, the content of which could be very interesting for the study. 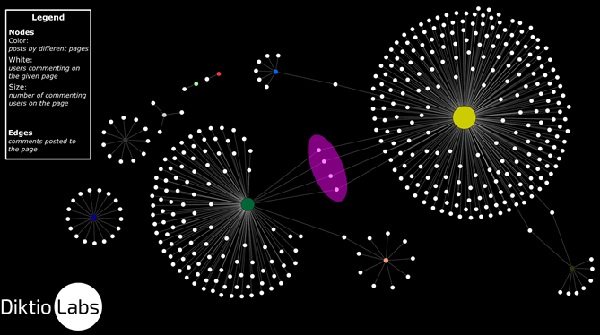 Figure 2 show four active users connect the two largest communities. Over the examined period (12 months), all four of them commented on anti-HPV vaccination-related content on both Facebook pages. Three more communities connect to these large communities: one linked by two; the other by one user. 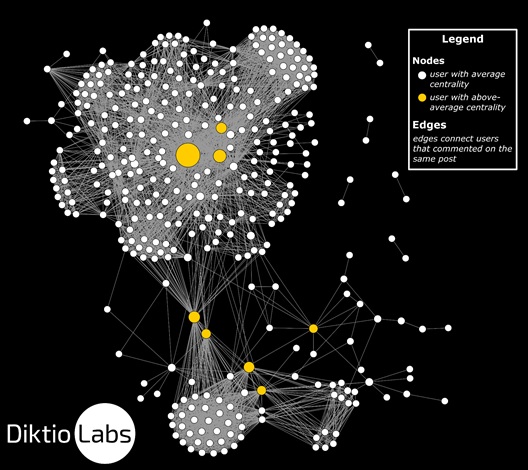 Although the analysis investigated tight communities of Facebook groups, it is visible that a significant portion of users are connected to each other. There are certain people who play crucial roles in linking these communities; they ensure the flow of information among micro-communities, which otherwise would not be able to communicate. These users are so-called ‘bridges’, with key positions in the community.

For information to flow efficiently in every micro-community, it needs to be presented in a manner that members are happy to accept and share. However, the same people need to be considered when it comes to stopping or encouraging a message.

This research paints a clear picture of how information online spreads like a virus – and how any active participant, without a formal role or conscious decision, can become a dominant information source or bridge connecting communities. Information spreads like an epidemic.

Chris Dobson is co-founder of US-Hungarian company Diktio Labs. He is an international business and marketing consultant and developer of companies. He led the management team that built and sold the largest PR agency across the then emerging markets of Central Eastern Europe and Russia from 1999-2006.

Chris has also worked for Grayling, where he sat on the global board, and Edelman, as MD for emerging markets within EMEA. Since leaving Edelman in 2014, he has worked as an independent adviser to a number of start-ups, and established businesses internationally, in parallel to his strategic role at Diktio Labs.

Getting the best from online communities