Pharma’s late-stage pipeline may be dominated by a new generation of specialist, often groundbreaking treatments, but companies looking to gain market access will face a rough ride in England over the next five years.

England’s National Health Service is facing a massive gap between its budget and demand, and must find £22 billion in efficiency savings over the next five years.

Health secretary Jeremy Hunt indicated last month that primary care, and not the specialised services and drugs provided by hospitals will be the priority for funding up to the next general election in 2020.

NHS England’s James Palmer, the clinical director in charge of the specialised services budget, this week confirmed that view –and said pharma would inevitably find market access for specialised drugs harder in the next few years.

This was one of clearest messages to emerge at the IMS Health UK Market Access Summit on Monday, where Palmer was joined by representatives from cost effectiveness watchdog NICE, which also reviews rare and ultra-rare disease drugs, and from the new Greater Manchester devolution project, seen as key to the future of an integrated, sustainable health and social care system.

A wave of new specialist drugs 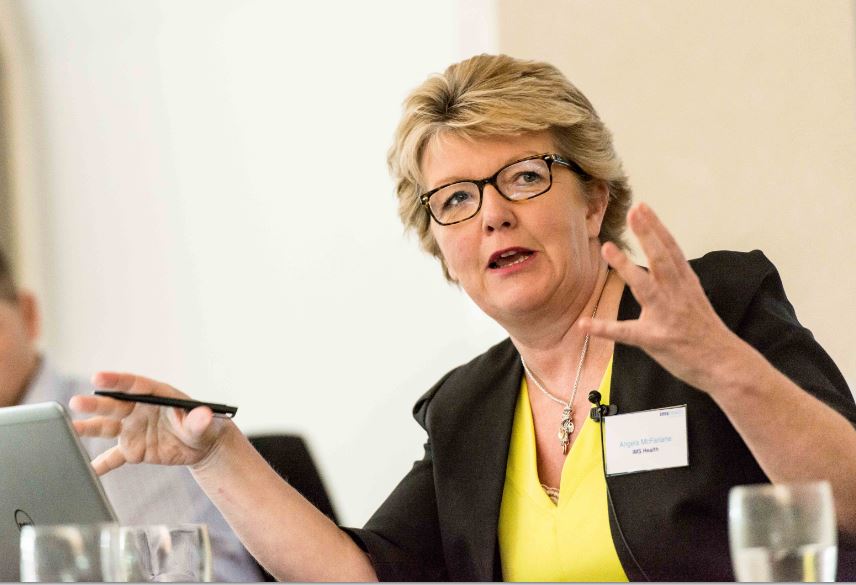 Hosting the event, Angela McFarlane, Senior Principal for IMS Health Local Market Access said the 2013-2018 period will see a huge shift towards more speciality medicines being launched – something that healthcare payers around the world are already struggling with.

IMS Health forecasts that 94 per cent of the drugs bill growth in Europe over the period will come from specialist medicines, amounting to $25-35 billion extra that healthcare systems will have to find from their already under-pressure budgets.

Angela McFarlane said that budget pressures, and the “constantly changing rules of the game” in the UK were making it extremely difficult for the industry.

“It feels like it has never been this bad in terms of market access,” she said, but urged the industry to engage constructively with the health service, especially NHS England (NHSE) which is both the budget holder and commissioner of specialised services and drugs.

Speaking candidly, James Palmer – who still practises as an NHS neurosurgeon two days a week – said things were about to get tougher for new drugs.

Palmer said investment was needed in NHS primary care and community care, because “the system is getting really broken” and extra money was needed to simply maintain current standards.

This is despite NHSE being well aware that specialised services – and new cancer and rare disease drugs in particular – account for some of the highest growth in costs.

NHS England says its specialised drugs spending could rise 11.2 per cent between 2013/14 and 2019/20. However if this growth goes unchecked, this could open up a £5 billion deficit – which means NHSE will seek to keep down spending wherever it can.

“I think the chances of specialised services having significant growth allocation in money to deal with the 11 per cent growth in drugs, is [slim],” said Palmer.

The message is clear – companies will have to do even more to prove the value of their new products.

“I think the threshold of getting access to the market in England is going to be different to what you have experienced in the last few years – and increasing,” said Palmer. “That is the reality of health economics.”

One of the starkest illustrations of the problems has been the story of Gilead’s new hepatitis C drug Sovaldi. The drug is a breakthrough cure for the disease, but costs around £35,000 per patient in the UK – a price which could translate into more than a billion pounds if given to all infected patients.

The drug was approved by NICE in February, but NHS England made an unprecedented intervention, delaying its mandatory uptake until August, two months longer than usual.

The move was a clear signal that NHS England and its chief executive Simon Stevens are taking direct control of the health service finances, and saving money wherever they can.

Despite the outcry from patient groups and clinicians about such decisions, there are no easy answers about how to pay for this new wave of high cost treatments.

Angela McFarlane said Simon Stevens’ ‘strong bureaucrat’ mandate reflects the need to make sure the NHS keeps functioning in tough economic times. The new Conservative government has agreed to find the £8bn extra a year Stevens asked for, but many health service experts believe NHS England will struggle to deliver the planned £22 billion efficiencies over the next five years.

This is bad news for all the pharma companies with new high cost specialist drugs looking to gain access to one of Europe’s key markets.

However, NHS England doesn’t hold all the cards – if NICE recommends a drug, NHS England is obliged to fund its use – hence why it could only delay, rather than block or amend the Sovaldi approval.

By far the biggest growth area in specialised services is chemotherapy, fuelled by a wave of new cancer drugs, many of them funded via the Cancer Drugs Fund (CDF).

James Palmer said costs in cancer therapy are ‘out of control’ and indeed efforts are being made to rein in the CDF spending. However attempts to ‘de-list’ some treatments are proving contentious, and the CDF’s budget has nevertheless been expanded by 20 per cent next year to £340 million.

NHS England saw its reputation badly dented in December last year when a rare disease patient group The Society for Mucopolysaccharide Diseases (The MPS Society) mounted a legal action against it and won.

The charity is fighting for people with mucopolysaccharidosis type Iva (MPS Iva) to gain access to BioMarin’s Vimizim (elosulfase alfa) drug. Just 88 people are diagnosed with the condition in England, but the drug is estimated to cost £395,000 per person per year, a very high price.

The legal challenge found NHS England’s ‘scorecard’ for prioritising spending had never been open to consultation, and was therefore unfair. This means NHSE’s decision making for specialised services has been on hold while it consults on a new system, adding confusion and delay to pharma’s market access challenges.

NHSE must consult again on what methodology it should use to decide its priorities in future. James Palmer says this means decisions on what drugs will be funded for the financial year beginning in April 2016 might not be made until January or later.

The MPS Society’s legal victory hasn’t helped it gain access to Vimizim, however. NICE’s Highly Specialised Therapies committee ruled in early June that BioMarin needed to further explain the drug’s high price before it could be recommended.

Better the devil you know

The Vimizim saga illustrates the confusion around how to get a rare disease drug on to the market. NICE and NHS England are both potential routes – although there is also a risk that a new drug could get overlooked by both organisations, as NICE’s Highly Specialised Technology leader Josie Godfrey noted at the meeting.

Despite ongoing complaints about NICE from pharma and patient groups, it is a case of ‘better the devil you know’; NICE is now a mature organisation, and offers more clearly defined processes and consultations than NHS England, which was only established two years ago.

NHS England has been criticised by a range of stakeholders for lacking transparency and clear criteria for its decision-making. This includes questions about how to submit drugs for review, and timelines for appraisal.

Speaking for the assembled UK managing directors and pharma market access leaders in the room, Angela McFarlane called for greater clarity and transparency from NHS England.

“There have been so many surprises along the way, and everything is on hearsay, and who you know, and not everybody knows everybody.

“I think the plea is for no more surprises,” she said, adding that UK leaders were often left flatfooted by its decisions, and unable to explain local market developments to their global bosses.

The PPRS not helping NHS England 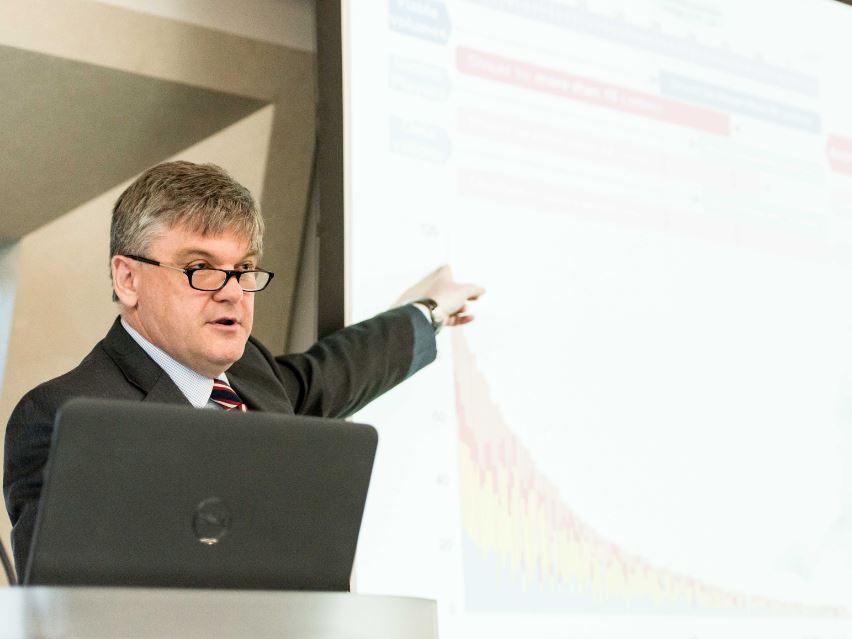 There was also confirmation from James Palmer that the new PPRS pricing agreement is not providing direct funding for new drugs, as was promised when it was introduced 18 months ago.

The deal, brokered by industry organisation the ABPI and the Department of Health involves a sector-wide budget cap. Any NHS spending over this limit is paid back to the health service by the industry, but is meant to go back into funding innovative new treatments. But James Palmer says he received no funds marked ‘PPRS rebate’, with the funds simply being merged back into the Department of Health’s baseline – very much contrary to what had been originally promised.

Angela McFarlane said that this was the clearest confirmation yet of what the industry had suspected for a long time. She added that the picture was different in Scotland, where £80 million has been set aside into the New Medicines Fund this year.

Any causes for optimism?

Despite the talk of an increasingly tough environment, there were a few grounds for optimism. Angela McFarlane pointed out that the UK is pioneering the systematic application of real-world evidence, and that this could eventually become a reliable way of funding innovative drugs which can prove their value to patients.

James Palmer pledged that any drug that could genuinely prove great value to patients would be prioritised by his organisation.

NHS England’s masterplan document for the next five years – the Five Year Forward View – includes plans for expansion of Commissioning through Evaluation, a real world evidence pilot which aims to gather evidence for drugs or procedures which might not otherwise gain traction.

Palmer also endorsed a suggestion that pharma should develop new commercial models to support uptake of its drugs. He said some companies were “very savvy” in demonstrating the wider benefit of their drug across the wider health system. “I think it is down to you to come up with innovation in terms of the commercial model for your product,” he concluded – and said NHS England’s focus would be on developing the best commissioning models across the sector.

It remains to be seen if NHS England can exercise an iron grip on budgets, and avert that £5 billion specialised services overspend. If the industry produces more genuinely groundbreaking treatments such as Sovaldi – with evidence to match – NHS England and NICE will find it difficult to refuse market entry.

There are advocates within the government for faster uptake of new drugs – most notably Life Sciences minister George Freeman, who is behind the ambitious Accelerated Access Review.

Just this week, Bristol-Myers Squibb’s Opdivo gained a special Early Access to Medicines thumbs up in the UK for lung cancer, a new scheme aimed at fast-tracking access to potential breakthrough drug. But Opdivo and other new immuno-oncology drugs are likely to cause a major headache for NHS budget holders, similar to Sovaldi in hepatitis C.

For that reason, the next five years promises much more tough talking on both sides, but this must be followed by new approaches to pricing and access if the familiar UK market access deadlock is to be overcome.