The pharma launch environment has changed extensively over the last decade. Sarah Rickwood discusses the increased payer power and the move towards targeted product launches in this article, as well as how pharma can overcome the new challenges in order to launch successfully.

In the last decade, the pharmaceutical industry has seen extremely rapid changes in the environment for new launches. Understanding how the environment has changed and what this means for tomorrow’s launches is a vital launch preparation activity; launching products based on the success drivers of past launches guarantees under-performance, because it will be preparation for an environment that no longer exists.

Figure 1: the launch environment is changing rapidly in a multi-factorial fashion

One of the dominant environmental changes is the rise of payer power. Restrictions, like Health Technology Assessment (HTA), have spread across countries, as payers became the first-line decision makers on launch.

As payers have become more powerful, with more sophisticated tools at their disposal to manage the cost of new therapies, the environment has also changed in their favour. Thanks to peak small molecule genericisation, there are more off-patent, low cost therapies available in more therapy areas than ever before. The availability of effective low cost alternatives allows payers to manage both price and uptake of new launches into genericised areas.

Pharmaceutical companies have to find new ways to work in increasingly restrictive payer environments. This means ruthless focus on the demonstration of product value versus existing standard of care.

Where decision making power is largely or wholly in the hands of payers, the impact of traditional rep-based promotion becomes much less. Across countries, representatives are changing their role to be more cross functional, working across prescribers and payers to get launch access.

“Thanks to peak small molecule genericisation, there are more off-patent, low cost therapies available in more therapy areas than ever before.”

Also reducing impact of traditional promotion to prescribers is movement away from traditional information resources. Traditionally, the pharmaceutical representative was an important, if not primary, source of information on new launches for doctors. The rise of the internet and social media technologies mean that doctors (and patients) receive their information via other media.

As the centre of gravity for global growth tips to pharmerging markets, we might expect a similar trend for NCE launches. This has not been the case. We took NCEs first launched between 2004 and 2011, analysing 16 countries accounting for almost 80% of current global pharmaceutical market value, in launch years 1 and 5. Launches in pharmerging markets are frequently later than the US or Europe, therefore we normalized sales so that year 1 represented the first year sales in each country. We found that the six largest pharmerging markets accounted for just 3.5% of first year sales. By the fifth year, these pharmerging markets accounted for just 2.5% of the cumulative sales – less than any one of the major European countries or Japan, and far less than the US. NCE launches are still a mature markets play.

Figure 2: launch is still most often a mature markets play

Longer term, the under-contribution of the pharmerging markets to global NCE launch sales must be addressed. This will require careful selection of the right launches to prioritise in emerging markets, and close attention to affordability.

As the key primary care therapy areas genericise, the number of primary care excellent launches has reduced. Global value growth for protected products has moved decisively towards specialist products, with the sole major exception of type II diabetes. The focus of launch activity is increasingly specialist. Recent launches we identified as excellent reflect this switch to specialty.2 Of the 10 identified, only one, Januvia, is a conventionally primary care launch.

“Longer term, the under-contribution of the pharmerging markets to global NCE launch sales must be addressed.”

Figure 3: the majority of new launches are increasingly targeted

Smaller individual launches means more frequent launches will be needed to maintain or grow revenues. But more launches by a company means a lower percentage acheiving excellence. We might expect companies to learn and improve with a high volume of launches. In reality, they struggle to achieve this, and instead experience the downsides of multiple launches – lack of focus, resource allocation and prioritization conflicts.

Figure 4: the more launches a company has, the lower the proportion that are successful

Successfully negotiating high intensity launch periods is particularly crucial, because of the high importance of a launch’s performance in its first six months. Even as late as five years into launch, 80% or more of launches follow the path established in their first six months. 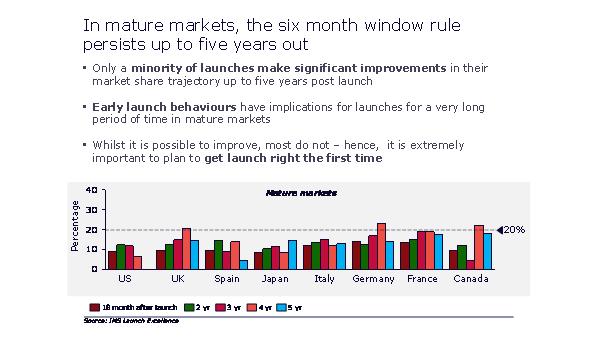 The implication of the extended impact of the first six months is simple; companies have to prepare and focus in this exceptionally important period. This simple challenge is, in fact, very tough even for a single launch. It’s even more challenging with multiple launches.

“Successfully negotiating high intensity launch periods is particularly crucial, because of the high importance of a launch’s performance in its first six months.”

The features of an effective multiple launch approach should minimize the negative impacts of multiple launches, and to capture the positives (figure 6). Negatives must be addressed using strong forward planning across launches at international and affiliate level and an evidence-based approach to resource allocation. Multiple launch situations also create launch-experienced teams and best practice learnings rapidly. It is very easy for companies to lose, or under-value these assets.

Figure 6: multiple launches in a short space of time brings negatives and potential positives – the above graph shows how to overcome this challenge and suceed

Figure 7: the foundation of launch excellence is preparation and planning

Companies that succeed in future launches will require a systematic, evidence based and comprehensive approach. Applying the launch excellence fundamentals; alignment and focus behind the launch, timeliness and quality in preparation and planning, and visibility in strategy development and performance evaluation, is the start. Building a company culture of excellence and learning in launch is the next vital step to a sustainable excellence across launch after launch.

Sarah Rickwood is the Director of the IMS Europe Thought Leadership team.

How can pharma achieve a successful and sustainable product launch?