The current predictive ability of preclinical drug tests is not very reliable. Due to unforeseen adverse reactions, over 30% of candidate drugs don’t pass clinical trials. Even if they pass the trials and make it to market, some drugs cause harmful or even deadly side effects. Good examples are the heart attacks caused by the arthritis medication VIOXX.1

Why aren’t such adverse side effects detected during testing phases? A major reason is the inadequacy of the model organisms used to test compound efficacy. There is some good news: the development of JAX diversity outbred (J:DO) mice. These mice are better models of human genetic diversity, have much more uniformly and widely distributed genetic variations, are more resistant to early and late recessive allele effects, and are more vigorous than any other mouse resource. They are not affected by confounding transgene perturbations. Their exceptional genetic diversity and high-resolution genetic mapping ability are unmatched. The predictive ability of J:DO mice could significantly reduce the incidence of harmful side effects of tomorrow’s drugs.

“Why aren’t such adverse side effects detected during testing phases?”

The J:DO colony was developed by randomly outcrossing non-sibling mice from among some 150 partially inbred CC lines (see Figure 1). As a result of this breeding scheme, each J:DO mouse produced is genetically and phenotypically unique – a virtually non-repeatable event. This genetic and phenotypic diversity is evident even among J:DO littermates (see Figure 2). 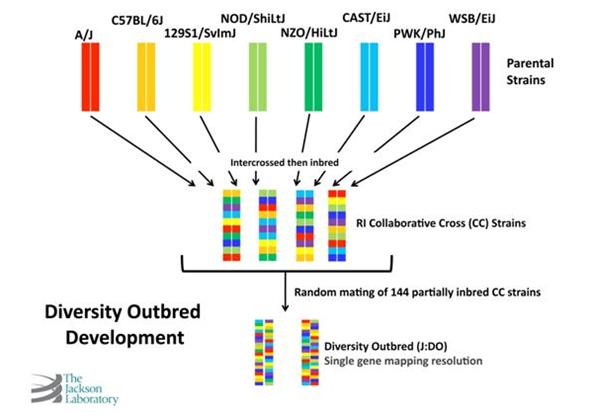 Figure 1. The development of DO mice.

J:DO mice meet Churchill’s primary objective: to produce mice that can be used to genetically dissect any complex trait – including susceptibility to drug toxicity – better than any other mouse resource.

Listen to Professor Gary Churchill’s seminar on diversity outbred mice, titled “Developing the Laboratory Mouse as a Tool for Systems Genetics”, presented at the New York Academy of Sciences, September, 2011.

The development of DO mice. 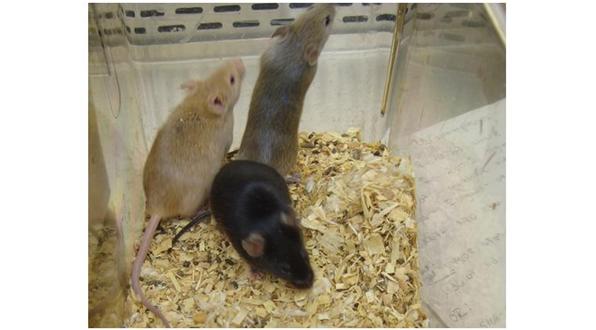 Will J:DO mice live up to their potential? Professor Churchill thinks so. In a recent study, he and colleague Karen Svenson, Ph.D., validated the use of J:DO mice as a quick and effective fine-mapping tool. Using a small cohort of these mice, the two scientists correlated the variation in total plasma cholesterol to a two-megabase interval containing approximately 12 genes. The region encompasses more than 32,000 SNPs. Yet, by genotyping and phenotyping a group of J:DO mice, Churchill and Svenson narrowed the field of possible causative SNPs to seven.3

Chemotherapy is a great weapon in the fight against cancer, but the side effects can sometimes be worse than the cancer itself. Take, for example, the three commonly used cancer drugs, doxorubicin, cyclophosphamide, and docetaxel. Their well-known myelotoxic effects include reduced production of blood cells, anemia, and low immune responses. In a pioneering study, Churchill and colleague Neal Goodwin, Ph.D., are using sophisticated genetic mapping and live-animal imaging techniques to identify the alleles that make these drugs toxic to some J:DO mice but not to others.4 Says Churchill, “It’s almost like testing chemo drugs in every person on Earth. This sets the scene for future, highly reliable screens for cancer patients.”

In summary, J:DO mice promise to be a powerful tool for high-resolution QTL mapping and assessing compound efficacy and toxicity. They are an important step in our progress toward realizing the goal of individualized medicine.

Will J:DO mice live up to their potential?