Major opportunities exist for pharma now that the government has allowed foreign companies to invest in hospitals, but they also face complex taxation and an intertwined public and private healthcare system.

The growth was sustained by rising wages, strong credit, lower interest rates and the high price of commodities. Government cash-transfer programmes, such as Bolsa Familia, further helped to raise the poor into the consumer class. A consumption boom enabled the new middle class to acquire household items such as televisions, mobile phones, mortgages, health insurance and better health services. By the end of 2014, Brazil had over 140 million consumers in the middle and upper classes. 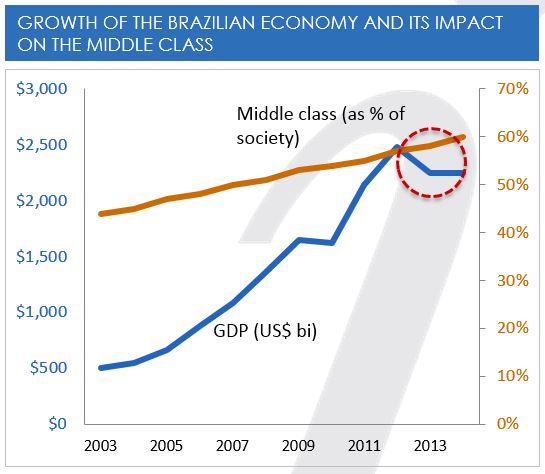 By 2013, signs of an economic slowdown began to appear. Being a mineral-rich region, Latin America’s currencies have a ~90% correlation to the price of commodities. The slowdown in the Chinese economy translated to downward pressure on the price of commodities and thus a devaluation of currencies across the region. Brazil was no exception and a 66% drop in commodities pricing between July 2011 and March 2015 translated to a 51% devaluation over the same period. 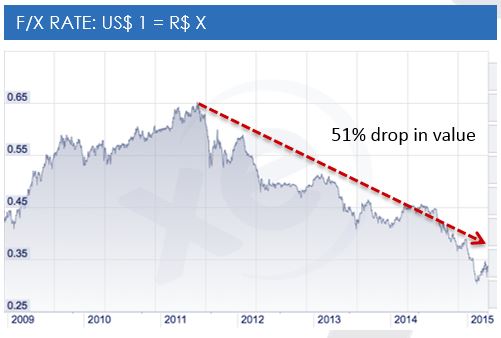 Massive protests in 2013 vented public frustration with corruption, inequality, poor healthcare and the overall lack of social progress after a decade of economic growth. These continued throughout the 2014 presidential elections and persisted into the first quarter of 2015 as the government-controlled oil giant Petrobras’ corruption scandal expanded.

While austerity and reduced growth are the norm for most of Brazil, select industries continue to expand, with healthcare among them.

Healthcare is, and will remain, an economic and social priority in Brazil. Since 2014 it has become the number one priority for the public, ahead of violence, security, corruption, education or unemployment.

Over 80% of new healthcare consumers come from the emerging middle class. In light of this, private insurance companies and care providers have adapted their offering to meet the demands of these ‘first-time consumers’.

While foreign companies have operated in Brazil for many years, the government has only recently opened up the hospital market to foreign businesses. Such a move will increase interest in the sector and attract investors eager to capitalise on Brazil’s underfunded hospital sector.

The demographic trend towards smaller families is also favourable to investors, as it is freeing up disposable income to i) consume more health insurance and ii) utilise the private healthcare system, which provides a superior service to the public one.

Optimal demographics, if allowed to flourish in a prosperous political climate, could result in the fastest-growing healthcare opportunity in Latin America.

It is estimated that by 2017 Brazil will need an additional 13,000 hospital beds. However, Brazil is a complex market in which to do business. The World Bank’s Ease of Doing Business ranking positions Brazil 120th out of 189 countries. It also has the region’s most complicated tax code, with up to 70 different taxes to comply with. Part of this complexity can be seen in how the healthcare system is managed, being in part private and in part public.

KEY FACTS AND FIGURES ABOUT BRAZIL 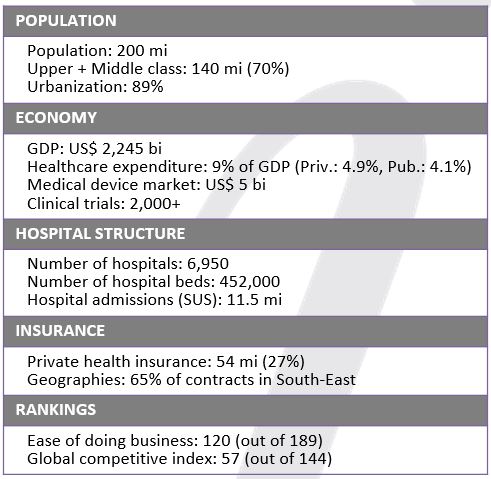 By law, every Brazilian citizen has the right to, and access to, public healthcare, provided by the Unified Healthcare System (SUS – Sistema Unico de Saude). However, there are vast discrepancies between public care facilities. Depending on location, a patient may have access to world-class care or a rudimentary countryside clinic.

The biggest problem facing the SUS is the lack of funding. The system was initially conceived to rely on additional taxes, which were never implemented. The private sector was invited to provide supplemental coverage to the public infrastructure through Public-Private-Partnerships (PPPs). Today, the largest hospitals in the country are philanthropic and have public (SUS), as well as private, wards.

The public sector now focuses on offering primary care, such as clinics and emergency units. Through outsourced service contracts, the public sector relies on private institutions to provide care in hospitals, outpatient clinics, diagnostics and therapeutic services. Given the discrepancy in the quality of care, the private sector has grown to supplement and even replace public care – at least for those who can afford it. In 2000, government spending accounted for 75% of total healthcare expenditure; in 2014, this number dropped to under 50%.

SELECTED HEALTH ISSUES AND HOW THEY ARE TRENDING 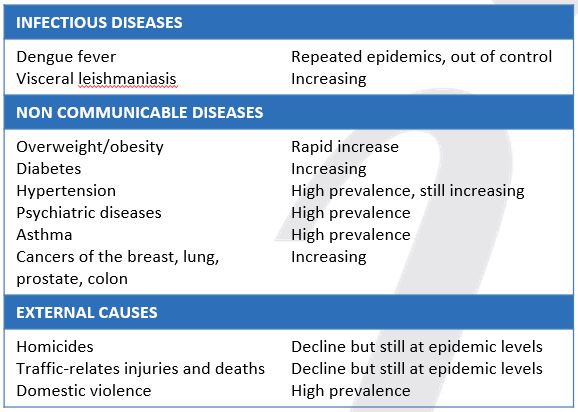 The private hospital market is regionalised, with no group owning more than 1% of the market based on the number of beds, or having national coverage. Such fragmentation becomes problematic when dealing with issues such as electronic medical records (EMR), information exchange, patient files, system compatibilities and other IT elements. The southern part of Brazil is generally wealthier and has access to a wider range of hospitals and doctors; over 70% of Brazil’s doctors are in the South and Southwest.

The private insurance market is also fragmented, with the seven largest private health insurance companies (each with over 1 million lives insured) holding less than 30% of all beneficiaries.

The combination of these factors means there is a need for greater coverage and access to healthcare, fuelled by lower operating costs. As mentioned, by 2017 Brazil is likely to need an additional 13,000 hospital beds. Achieving broader coverage can only be attained through a more efficient system.

Until recently foreign businesses were not allowed to have ownership in Brazilian hospitals. This impaired the sector’s ability to develop fully. However, in January 2015 President Dilma Roussef announced a change. Weeks later, private equity funds, such as Carlyle Group and GIC Holdings, began investing hundreds of millions of dollars in acquiring minority shares in the country’s private hospitals. Further M&A activity is likely, resulting in increasing industry consolidation.

Such consolidation will require integration of management systems, increased standardised metrics and reporting, greater emphasis on international benchmarks and more transparency. Health IT, medical imaging, EMR and interconnectivity will also benefit from these trends. Pressure to keep costs down will continue and will also be a determining factor in the ability to win large SUS contracts. In light of this and the ageing population, home care is expected to become more common.

OPPORTUNITIES IN THE MARKET