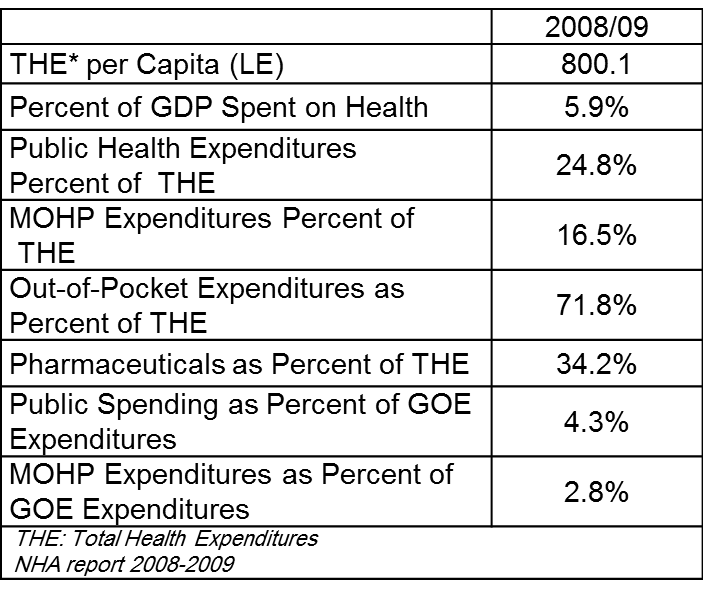 For decades Egypt has been trying to reach a high level of healthcare insurance coverage. However, it still has the highest out-of-pocket expenditure in the Middle East and North Africa, representing up to 72% of total healthcare spending (chart 1).

Egypt’s Ministry of Health (MoH) covers 17% of the population,1 and the Health Insurance Organization (HIO) covers 58.2% of Egyptians.2 However, only 6% of Egyptians actually use HIO services1 because coverage was not satisfactory. The MoH has put forward a plan for a new HIO system that would cover 70% of Egyptians by 2016, with the private sector contributing 20% of coverage at a cost of 16 Billion EGP.3 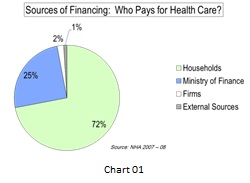 To extend the reach of healthcare coverage and avoid wasting budget and time, Egypt’s two main payers will work together to launch one integrated payer system. In the new system, the HIO will be the budget holder only and the MoH will be the service provider. Some logistical progress was made, but not enough to launch the idea nationally.

Examples were shown from countries that have universal healthcare coverage, and the importance of building health technology assessment (HTA) as the audit and system core for new interventions and technologies assessment was discussed, followed by building a taskforce team putting the reform standard operating procedure to improve the process, and a cycle of meetings to track progress every three months.

“For decades Egypt has been trying to reach a high level of healthcare insurance coverage.”

2. Best Quality: Provide the population with the best quality service and the newest healthcare technologies

3. Cost: Use the budget with the ultimate return and provide services with the lowest costs

4. Differential: Be different and unique from other countries

5. Effectiveness: Determine the correct assessment of services and system efficiency

The first and most important aspect to concentrate on in healthcare system reform is investing in informatics infrastructure (data, knowledge, services) to build a beneficiaries database (registries and patients charts). This will help in managing treatment protocols as well as getting correct forecasts for services and treatments purchase. The MoH has already started this process by initiating a supply chain project.

Along with the informatics infrastructure development, quality aspects also should be considered:

Healthcare systems worldwide can be categorized by four types:

Although Egypt started as a national health service back in the 1950s, it now is considered a mixed system.

All of the above-mentioned systems have their strengths and limitations. For example, some have a long wait list (1 million citizens in UK) caused by the limited number of specialized physicians available. Rapidly aging populations are causing a demographic change that will place severe pressure on social security and healthcare programs. High-tech medicines are overemphasized at the expense of preventive and long-term care. High unemployment rates have narrowed the base for payroll contributions to the funds (as in Germany).

“Healthcare systems worldwide can be categorized by four types…”

All the above limitations have forced countries to seek solutions, such as finding new sources of tax revenue, imposing more stringent fee and budgetary controls on health providers, finding ways to increase efficiency in health care delivery, scale back on benefits by no longer insuring some previously covered services, and impose user fees.

Although many of the above mentioned solutions were applied in several countries especially after the financial crises and recessions in the last decade, the problem will be mainly in system efficiency and decreased budget waste before asking for more revenues. Many government officials see that the budget issue in Egypt is somehow overrated and the solution won’t be increasing budget but first better allocation and utilization of the available budget, the reasons moved many countries toward HTA bodies, which can manage the scrutiny of budget and offer the most cost-effective services (interventions / medications) that meet the country’s budget.

In conclusion, HTA bodies working with the HIO will be the key to reach better efficiency in healthcare services. The HTA is planned to be launched by end of 2014 in Egypt and will be a strong asset in the new HIO Egyptian system.

Have your say: What will Egypt’s healthcare system look like in two years’ time?