Andrew McConaghie reports on contrasting views on 2014's merger and acquisition rollercoaster ride, and the forces propelling it.

The annual pharma / biotech sector conference hosted by the Financial Times usually yields some intriguing remarks from leaders in the sector – as well as its fair share of over-used strategic buzzwords – but this year the organisers assembled a full roll-call of companies involved in 2014's big story, mergers and acquisitions. 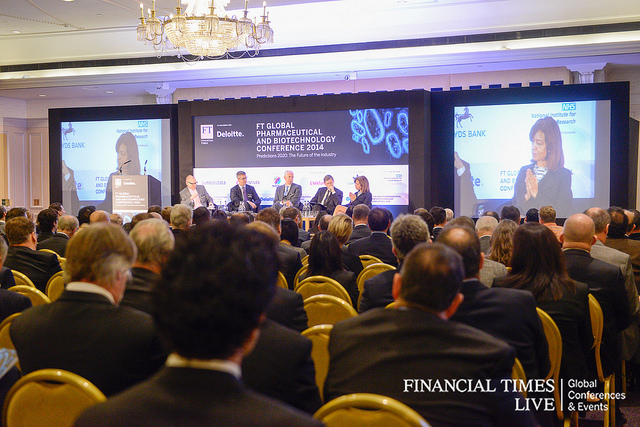 The FT Global Pharmaceutical and Biotechnology Conference 2014 in London brought together Medtronic, Shire and MedImmune - all involved in this year's dramatic M&A manoeuvres. Pic courtesy of FT.

When the invitations went out to pharma execs from Shire, Medtronic, MedImmune (part of AstraZeneca) and Actavis some months ago, they couldn't possibly have foreseen how the rollercoaster ride of this year's M&A would end up in mid-November.

Of all the fevered M&A activity this year, four deals stand out – all fuelled by the return of low interest lending from banks, and the use of 'tax inversion' to avoid paying high US corporate taxes.

The first, Pfizer's £69 billion ($117 billion) bid in May for AZ was unwelcome and unsuccessful, seemingly failing at the last gasp due to Pfizer's clumsy wooing of the UK company's board. Despite UK takeover rules permitting a second bid within the next few days, Pfizer looks increasingly unlikely to try again – at least for AZ.

Second is Valeant's dogged pursuit of Allergan. The company launched its takeover bid in concert with its activist investor Bill Ackman, and started off unsolicited-but-friendly in April, but grew progressively more aggressive, eventually redefining the term 'hostile takeover bid'. After months of evasive action, Allergan has escaped Valeant by running into the arms of white knight Actavis, in a $66 billion deal confirmed on Monday.

The third is medical device giant Medtronic's $42.9 billion acquisition of Dublin-domiciled Covidien, which will see the Minneapolis headquartered Medtronic move its tax base to Ireland.The deal will seal Medtronic's claim to be the world's biggest medical devices company, and is set to be completed in 2015. This merger will go ahead despite US government moves in September to block tax inversion deals, and Medtronic insists the tax advantages are not the only motivating factor behind the deal.

However the final deal, AbbVie's $52 billion move to buy Shire, has been abandoned because of the aforementioned rug-pulling performed by the US Treasury.

Assembled on the FT conference podium on Monday were executives from Shire – chief executive Dr Flemming Ornskov, Medtronic's head of EMEA & Canada, Rob ten Hoedt and from MedImmune, research leader Bahija Jallal. Brent Saunders, CEO and President of Actavis had also been billed to join them, but his absence on the day confirmed that he was busy tying up the Allergan deal.

The executives engaged with the conference's pre-planned theme of 'the life science industry in the new health economy 2020', but their common experience of M&A – and contrasting views - made it a remarkable gathering.

When asked if the window for 'tax motivated' deals was now closing – and if indeed this was a good thing - the panel gave a fascinating range of replies, belying just how sensitive tax inversion deals are in political and corporate PR terms.

Rob ten Hoedt, head of Medtronic's EMEA & Canada business was at pains to stress that the rationale behind the Covidien deal was creating greater scale and product offering, rather than tax opportunism.

"[This deal] is far and away from a tax deal – it's a strategic fit," insisted ten Hoedt.

While Medtronic's deal is not as heavily dependent on tax advantages as others, the US government move means the firm will now borrow $16 billion to finance the takeover, rather than the original plan of using cash from overseas units.

MedImmune's Bahija Jallal declined to answer the question ("I will take the Fifth") but her sentiment was nevertheless clear. "We have to ask ourselves what kind of business are we in," she said, contrasting the work of R&D with the work of finance chicanery which she said she would "leave to the banks and others".

Jallal had remarked earlier that she had spent her entire career in the biotech sector, and thus takeovers were an occupational hazard (including when AZ acquired MedImmune in 2007). Nevertheless, she said post-merger corporate restructuring inevitably interfered with R&D work, and usually resulted in valuable research talent leaving the organisation. 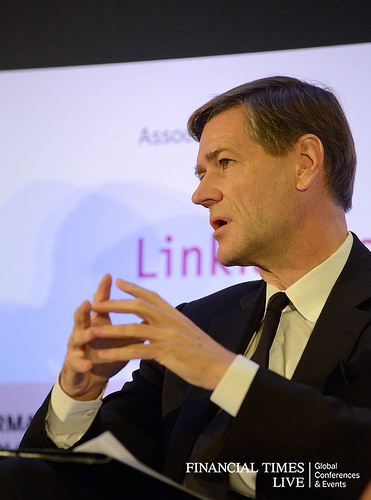 AbbVie's move was unlikely to have been part of his original vision for Shire, which had been on its own acquisition trail before the AbbVie offer was accepted in July.

Nevertheless, he defended the impulse to find savings, saying: "Efficiency driven deals will continue to happen.

"You won't get the topline growth your investors are looking for. Investors are putting a lot of pressure on companies for top line growth."

Acknowledging that tax inversion was now a target for US politicians, he added "tax inversion is just the tip of the iceberg," suggesting that finance heads and banks would find many other ways to reduce tax liability and boost profits.

Ornskov said there were two drivers for M&A - pursuit of greater innovation or for greater efficiencies. As the company is already domiciled in low-tax Ireland, Ornskov's strategy for an independent Shire is indeed based on acquiring greater expertise across rare diseases, contributing to a strategy to double revenues to $10 billion by 2020. The $1.6 billion Shire has received in compensation for the deal falling through will help fund its own spending spree. Nevertheless, Ornskov has made it clear Shire would be open to another takeover bid if the price was right for shareholders. This underlines the fact that it is often shareholder return which drives M&A deals, with interests of efficiency and innovation following in its wake.