Some of the most innovative and forward-thinking individuals in healthcare today showcased their work and ideas at WIRED Health on 29 April. Marco Ricci reviews some highlights of the conference.

Managing conditions and diseases from your pocket

In the exhibition area, the most prominent – and probably most expected – theme was the use of smartphones and apps to help manage both health and diseases. Coupled with the expanding wearables market, mobile tech is currently one of the biggest trends in healthcare. 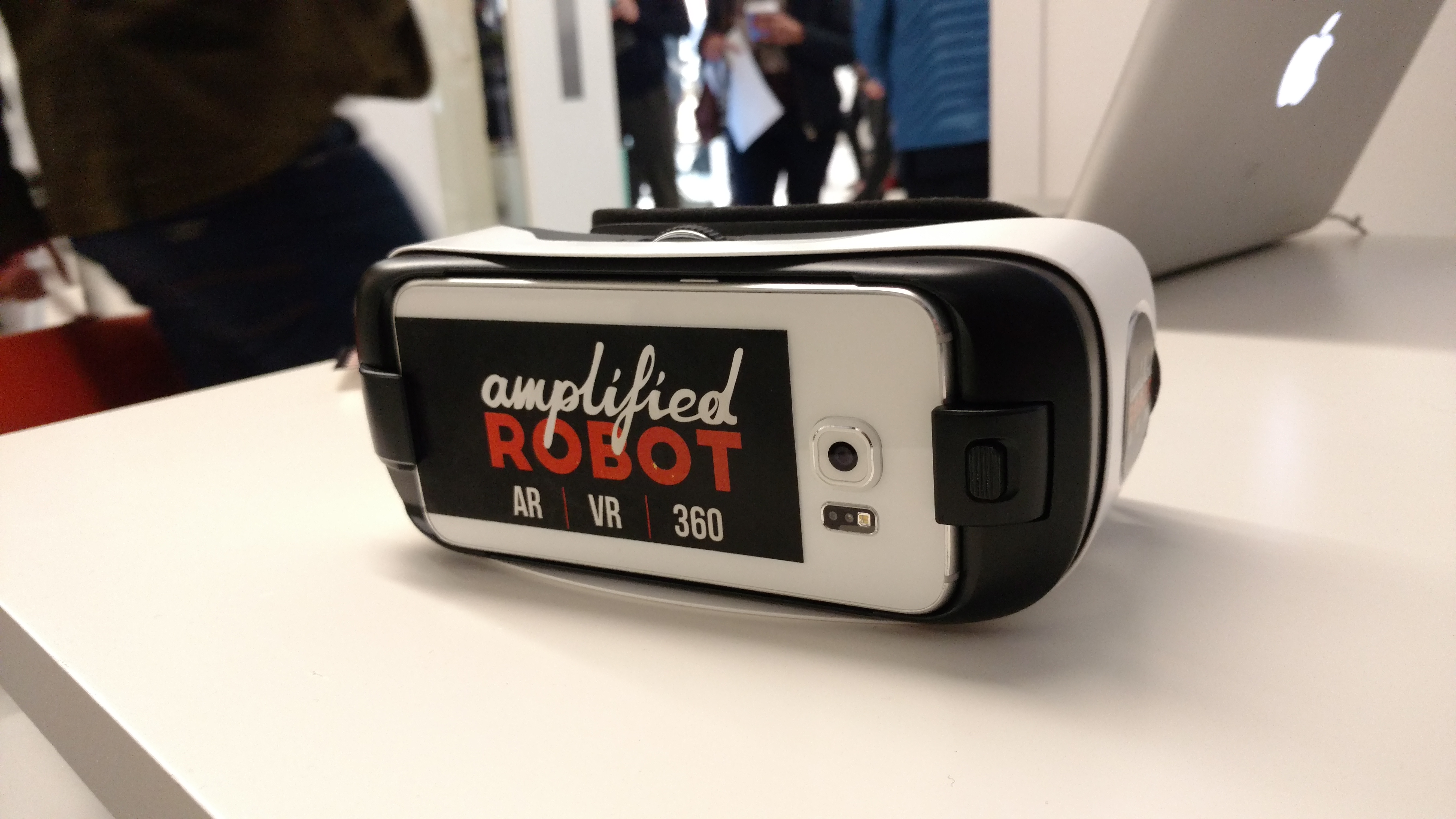 “Best Start-up” winner on the Bupa start-up stage was Sensely, which presented a virtual nurse platform, designed to guide patients through the initial triage process. Its virtual nurse ‘Molly’ records results taken from diagnostic tests and passes them on to a clinician, alerting the clinician in the case of worrying results. A follow-up video call can then be arranged.

Portuguese care service knok showed its virtual appointments system. By simply entering in health insurance information, patients are linked with a doctor specialised in their condition via video link, avoiding the need for a hospital visit.

One of the most inspirational talks was given by John Donoghue, Founding Director of the Wyss Center for bio- and neuroengineering in Geneva, whose focus is on building brain-computer interfaces to help paralysed people regain control of their bodies.

Donoghue expanded on the work done by his BrainGate team trialling a neural interface system that allows people to control robotic limbs using their thoughts alone. 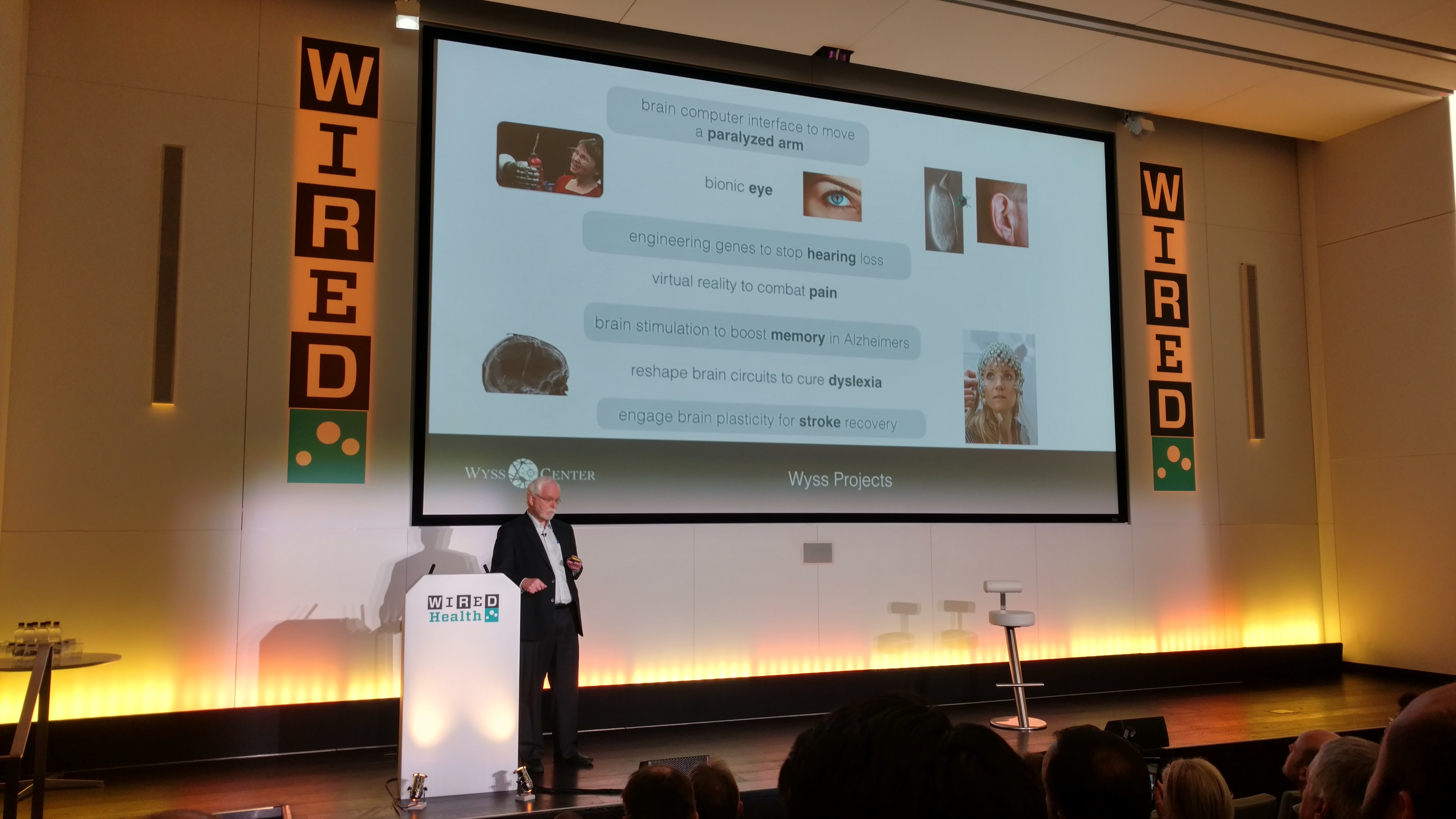 The Wyss Center seeks brain-computer interface solutions for conditions ranging from curing hearing loss to boosting memory in people with Alzheimer’s disease.
The impact of the BrainGate programme on users was shown in video presentations. In footage from 2006, a quadraplegic man called Matt was shown playing a simple computer game that involved avoiding goblins and collecting treasure chests. It appeared that the monitor was simply tracking Matt’s eyes as he looked around the screen. In fact Donoghue’s team had implanted a small chip, reminiscent of a tiny hairbrush, into the part of the brain that sends signals to move his arm. The chip then sent these signals to a computer and translated them into movement of the cursor on the monitor in front of Matt’s eyes.

A second case study featured a quadraplegic lady named Kathy with paralysis as the result of a stroke. This time, rather than a simple computer monitor, a robotic arm was controlled by Kathy’s thoughts. The video showed her moving the arm to bring a cup of coffee up to her mouth so she could drink it.

The team intends to use its brain-computer interface to treat disorders such as dyslexia by regulating frequency patterns in the brain. 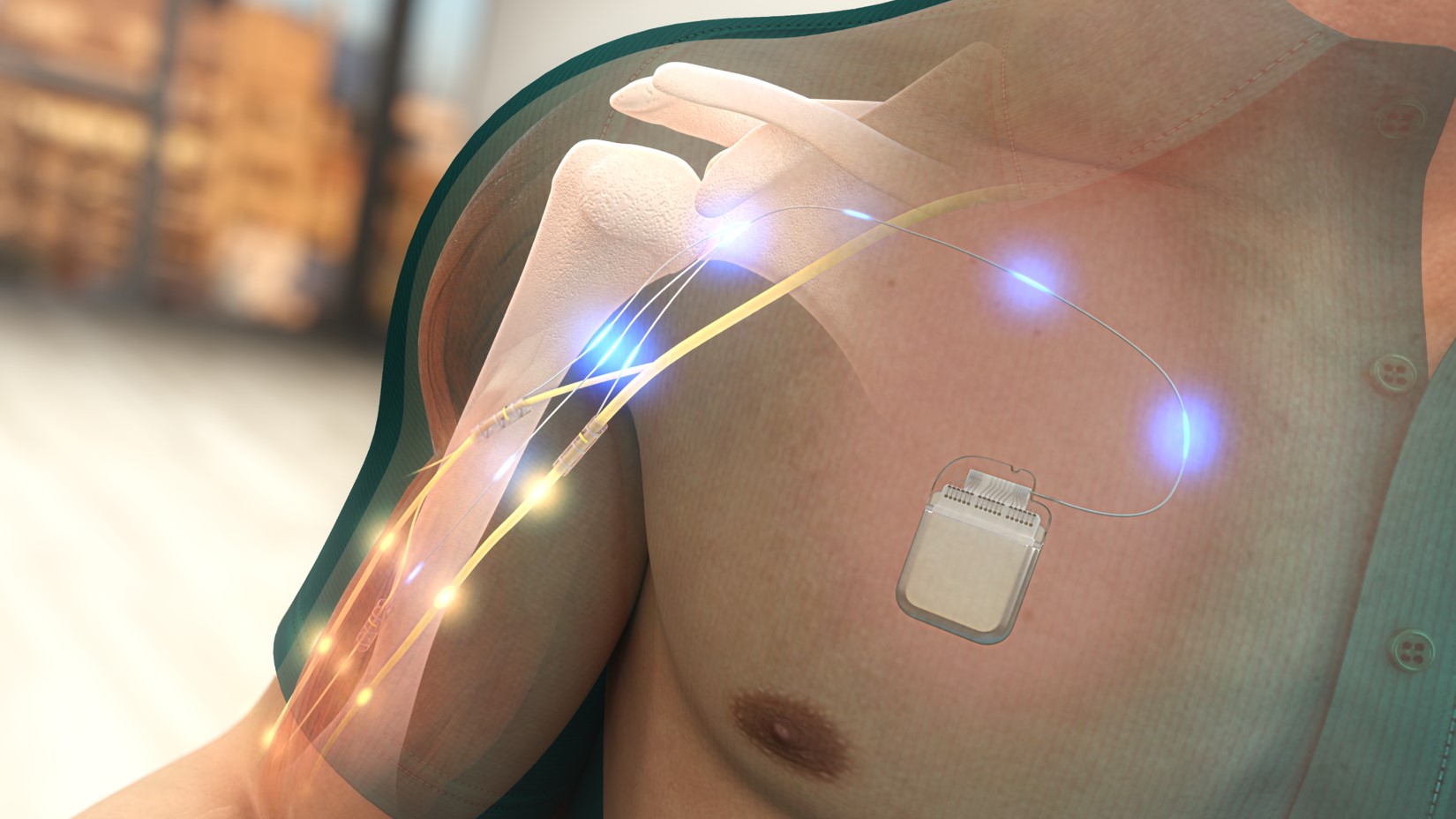 A snapshot of the concept video shown by Donoghue explaining the idea of skin implants that can send signals to muscles for paralysed people to regain control of their bodies.

However, Donoghue cautioned that much still needs to be done in this field, as he revealed the numerous pieces of equipment needed to achieve the results in a laboratory setting. “This is definitely not a product,” he said, bringing the audience back down to earth. He described the current structure of the pipeline for such technologies as being “full of holes”, meaning that many innovations like his did not receive adequate funding and eventually foundered.
Regardless of the current obstacles to making brain-computer interface technology more widely available, Donoghue’s talk highlighted not only the field’s existence as a largely untapped market, but also the potential it has to treat those with life-changing conditions.

“Medical technology is anything but transparent,” remarked Jose Gomez-Marquez as he introduced the work his lab is doing to address complicated designs in medicine. Referring to medical technology as being in a state of “blackbox”, he highlighted the lack of understanding of just how the technology works. 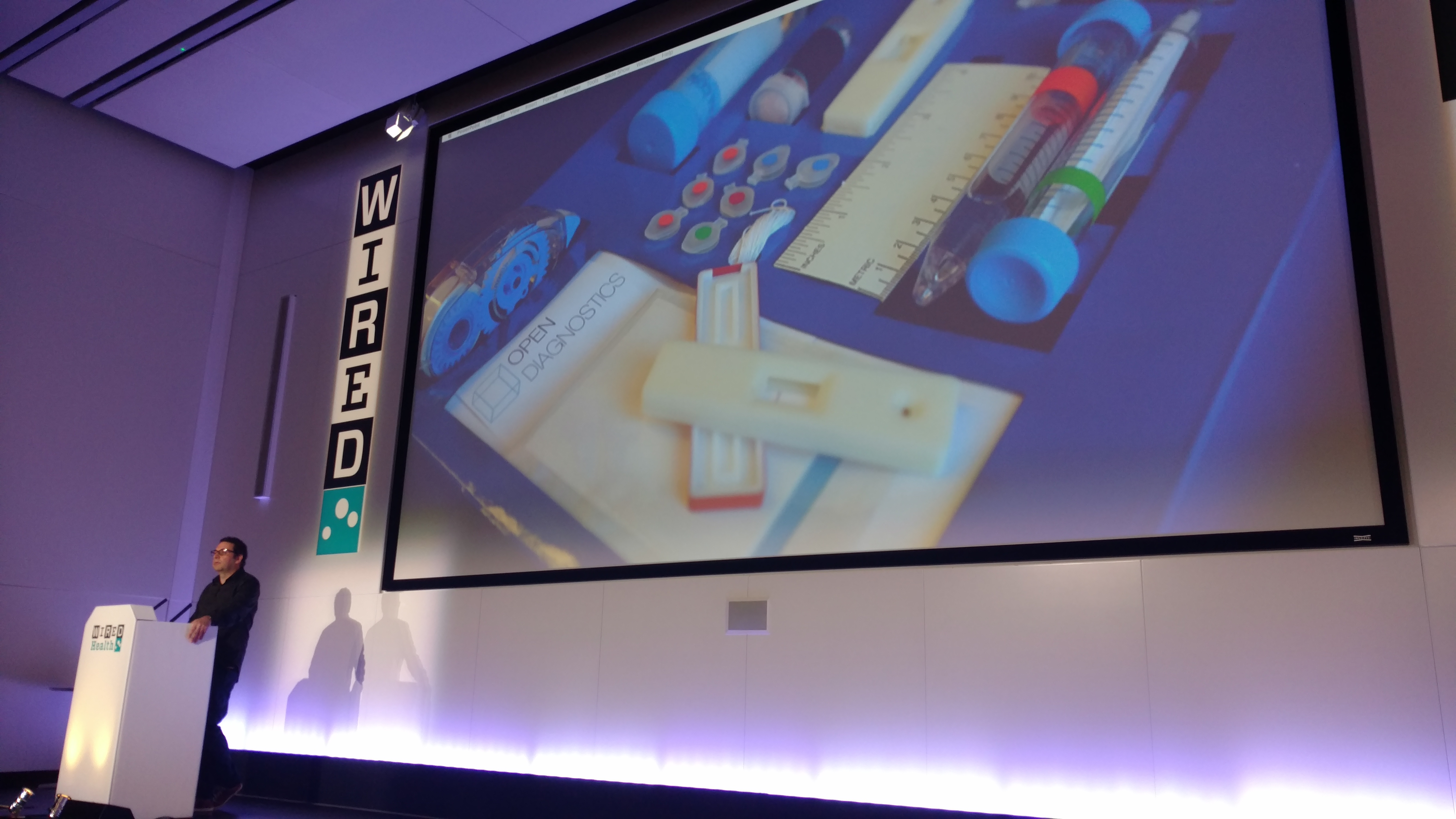 “It’s not just about coming up with ideas. It is about looking at the tangible ways that individuals shape, form, assemble, transform objects with their own hands and nearby resources” – Jose Gomez-Marquez.

He pointed out the stark contrast between healthcare’s digital uptake and digital uptake in other sectors. He explained the gradual integration of digital doing away with the need for various components in our lives as technology is introduced, without increaing the costs. But the opposite occurs in healthcare, he said, explaining how a digital thermometer jumped from $2 to $29 following the addition of bluetooth connectivity.

His company Little Devices works to address that contrast through the production of cheap DIY kits designed to be manipulated by the individual to address difficulties in their own work environment. On display was the MEDIKit platform – a kit that includes miniature drug delivery, diagnostics, microfluidics, prosthetics, vital signs and surgical device components that can be assembled in multiple ways.

Through a simple plug-and-play mechanism that allows the user the adjoin small tiles, the MEDIKit has led to examples of true innovation in developing countries in particular. Gomez-Marquez used the Ebola epidemic as an example of where “Hollywood’s worst script came real” with one of the world’s biggest shipments of “black boxes” in aid. Inspired to help fight the epidemic, his lab responded by producing its own version of a paperfluidic viral diagnostic kit which can be altered to diagnose different conditions through attaching specific biomarkers to the test itself.

The lab has since partnered with hundreds of hospitals in South America, giving doctors access to a cheap, simplified and fast diagnostic platform for the Zika virus epidemic.
Building miniature cellular environments to personalise treatment

The biggest innovations can come in the smallest packages. That was definitely the case when Geraldine Hamilton of Emulate explained how her company is using micro-engineered “organs-on-chips”, which are reported to provide more accurate and true-to-life representations of biological models than traditional laboratory testing. 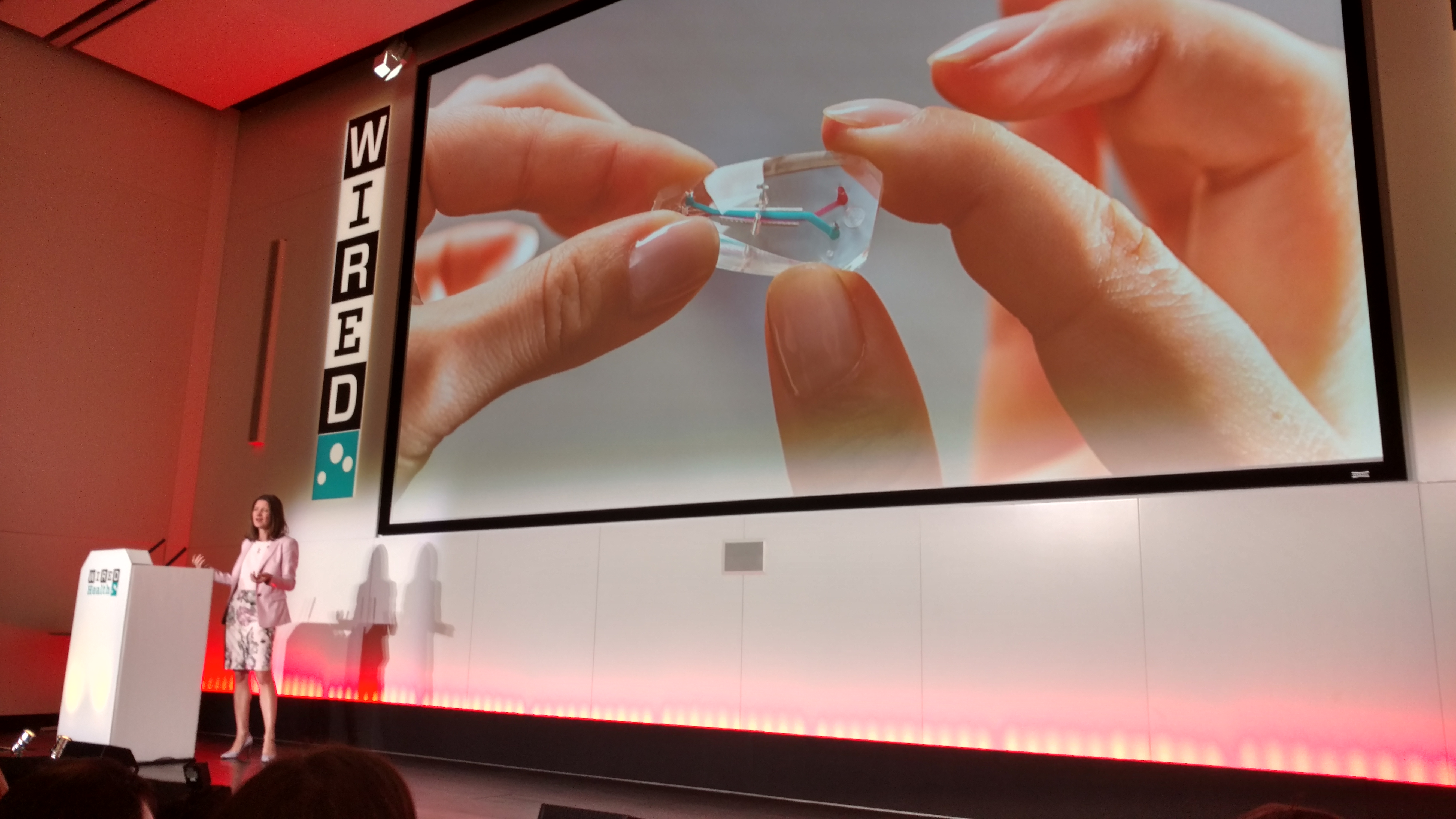 Emulate’s “organs-on-chips” was awarded the Best Product Design of the Year 2015 over entries including an air-purifying billboard and a sanitation system for developing countries.
With short video clips showing living lung tissue, firing synapses and cellular reactions to drugs, the biotech seems to have created a potentially revolutionary asset for healthcare.

The unique, dual-channel design allows for the production of tissue interfaces within the chip. The example she used was that of a lung chip, with lung tissue in one channel and capillary tissue in another, which allowed for monitoring of drug efficiency in passing through membranes to reach their desired target, as well as measuring cellular reactions. The malleable nature of the chip also meant mechanical forces could be applied – in this case, the chip could be stretched and relaxed to imitate breathing. A “gut chip” was then shown depicting cells mimicking peristalsis with its own microbiome system.

The chips’ potential benefits were further expanded with the introduction of stem cell technology. By initially sequencing an individual’s genome and identifying potential susceptibilities, stem cells could be harvested from the same individual and induced to create an environment that would allow personalised testing of drugs or dietary elements.

The big plus for the pharma industry was the potential to improve drug testing, both efficiency and safety, as well as potentially rescuing older drugs that would have failed previous testing in animal models due to certain toxicities. Some pharma companies had already shown interest in Emulate’s product, Hamilton stated. Merck was using the chip to work on asthma products, with AstraZeneca and Johnson & Johnson also showing interest. The Sean Parker Institute immunotherapy project was also a collaborator.

For the wider public, Emulate’s chip takes the next step towards making personalised care a reality.