Diabetes in the Middle East and North Africa: a high growth pharmaceutical market receptive to innovation

Carolyn Gauntlett discusses the growing global prevalence of diabetes, but more specifically in the Middle East and North Africa (MENA) and how pharma companies in this region are addressing this epidemic.

Diabetes is considered one of the main threats to public health in this century. Globally, there are 371m people living with this disease, 8.3% of the world population.1 Recent years have seen an explosion in incidence in the developing markets, as living standards improve, leading to a lethal cocktail of population growth, aging, urbanization, unhealthy diet and physical inactivity. The epidemiological balance has now shifted with eight of the Top 10 countries for diabetic population size being emerging markets: China, India, Brazil, Russia, Mexico, Indonesia, Egypt and Pakistan.1

The prevalence of Type 2 Diabetes (T2D) has increased dramatically in the Middle East over the last three decades. As many as six Middle East countries are among the Top 10 countries globally in terms of T2D prevalence (figure 1): Kuwait (24%), Qatar (23%), Saudi Arabia (23%), Bahrain (22%), UAE (19%) and Lebanon (17%).1 This is creating a health “time bomb” as these countries struggle to deal with such a large patient population requiring medical attention, in addition to the silent effects of high rates of undiagnosed cases.

“Diabetes is considered one of the main threats to public health in this century.”

Whereas in the US only 14% of adults with diabetes between the age of 20-79 fall into the youngest 20-39 age group, in the Middle East region this can be as high as 40%, with half of the countries over 30% (figure 2). The implication for many Middle Eastern countries is that a large percentage of their younger population are heading for a significantly shortened life expectancy, as well as a strong likelihood that their economically productive years could be blighted by the long term complications of diabetes, setting in during their forties and fifties rather than sixties and seventies. These young T2 diabetics are likely to be living with diabetes for longer, suffer more long term complications, and cause a greater economic impact with their diabetes not only from costs of treatment but also economic productivity lost. 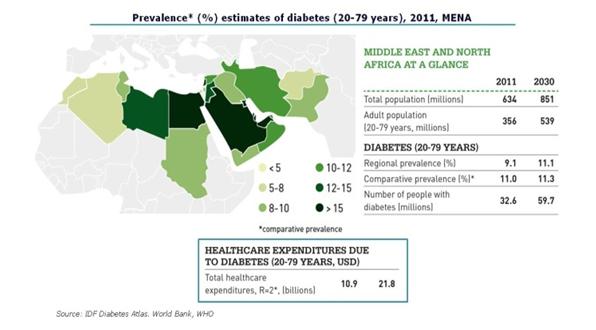 Figure 1: Prevalence of diabetes in MENA

These high prevalence rates and unusually high incidence in the younger generation mean that healthcare costs relating to diabetes are escalating rapidly – the IDF estimates a doubling in healthcare expenditure due to diabetes across the whole MENA region from $10.9bn to $21.8bn in 2030.1 Since in many of these countries the healthcare systems have a strong element of government expenditure, diabetes is a high profile political issue.

Where the small Middle East region is most distinctive is in its willingness to spend on innovation, early and heavily. In the Middle East as a whole, we see a strong share of spend on the modern insulins, and the newer innovative classes of pre-insulin diabetes treatments, the DPP-IVs and the GLP-1s. In Kuwait, spend on innovative treatments accounts for 73% of all diabetes IMS audited diabetes spend; in the UAE this is 68% (figure 5). This means that this market is an ideal ground for pharma companies looking to strengthen their emerging markets business.

The future for diabetes treatment in the Middle East

The fact that governments and other payers in the Middle East are so willing to invest in innovative treatments for diabetes implies a “meeting of minds” whereby the risks of failing to address the problems associated with 1/5 of the population, predominantly young adults, suffering from diabetes are at the forefront of the debate and plans for diabetes management. Pharma have been quick to embrace the region with rapid launch sequences and strong patient awareness and access schemes. But because this is a region where members of the diabetes population could be on treatment for up to 40 years, there are obvious opportunities for both pharma and payers alike to develop the most long term effective treatment paradigms.

Considering the above estimates of healthcare expenditure for diabetes in the region by 2030, we believe that it will be essential for these countries to find a more sustainable cost solution and implement outcomes and evidence based solutions. Against this setting, it’s understandable that payers will want to see evidence of treatment benefit in local populations and in particular, evidence related to complications. This means that pharmacos must undertake clinical trials in representative patient populations in the region. We do see pharmacos starting to address the issue of demonstrating benefit in local patient populations, in trials tailored to address specific situations such as the annual Ramadan fast.3,4,5

It seems like a natural next step that payers in this region will also be looking to track patients through the diabetes treatment pathway and measure the outcomes, enabling them to evaluate the results of different treatment options in the real world. At present the infrastructure to do this (eg electronic medical records, recording patient interventions) is not in place consistently across the region and so there will be an initial investment needed, but the value of the data gained in assessing and valuing the diabetes treatment landscape should make this worthwhile.

If this were to lead to faster and more intense scrutiny of new innovations on the diabetes market, then pharma could see the implications translate globally. Pharma should be working with Middle East and African payers / providers to tackle the escalating diabetes epidemic, and to evaluate the most effective treatments throughout the diabetic patient’s life. Pharma can collect the long term real world evidence required by payers globally, and the local payer / providers can be confident that they are tackling the epidemic in the most sustainable, and effective way.

How can payers better measure the outcomes of diabetes treatments in MENA?