Budget impact and cost effectiveness: Can the UK learn from ICER in the US?

As the NICE and NHSE consultation period on new budget impact assessments draws to a close, Leela Barham examines what can be learned from the approach of the independent Institute for Clinical and Economic Review in the US.

The National Institute for Health and Care Excellence (NICE) and NHS England (NHSE) are proposing to add a new ‘budget impact assessment’ when looking at new drugs and technologies.

This would trigger what amounts to a commercial negotiation in England for any new medicines which are judged to be cost-effective but have a high budget impact.

The proposals are controversial and not likely to be welcomed by the UK pharma industry, especially in the wider context of the existing Pharmaceutical Price Regulation Scheme (PPRS) effectively capping NHS spend on branded medicines.

Interestingly, budget impact also features in a new US organisation with many similarities to NICE, the Institute for Clinical and Economic Review (ICER), based in Massachusetts.

Established since 2005, ICER began issuing cost-effectiveness evaluations in 2014, and hit the headlines when it intervened in the row over the price of Gilead’s Sovaldi the following year.

So could the UK learn from ICER’s budget impact and cost effectiveness approach?

US approach to budget impact

ICER  is an independent, not-for-profit organisation that evaluates evidence on the value of a variety of health interventions; from tests to drugs.

Balancing the short and long term

The ICER approach to assessing the value of health technologies includes explicit consideration of budget impact. ICER has a concept of ‘provisional health system value’. This it describes as representing ‘a judgement integrating consideration of the long term care value of a new intervention with an analysis of its potential short-term budget impact’.

ICER cites Sovaldi as an example of where there are drugs that offer ‘excellent long-term value’ but where special action needs to be considered to ensure that the system can afford the drug.

Linking budget impact to affordability from an economy perspective

ICER also points out that ‘if the potential budget impact of a new intervention would contribute to an increase in overall health care costs at a rate greater than growth in the overall economy, health system value would be diminished’. In plain English, ICER is implicitly assuming that there should be growth in the health spend, but that this should not go beyond the rate of growth in the economy more generally.

ICER breaks down how it reaches the threshold to determine where budget impact might be problematic (Table 1) reaching a threshold of $904 million. 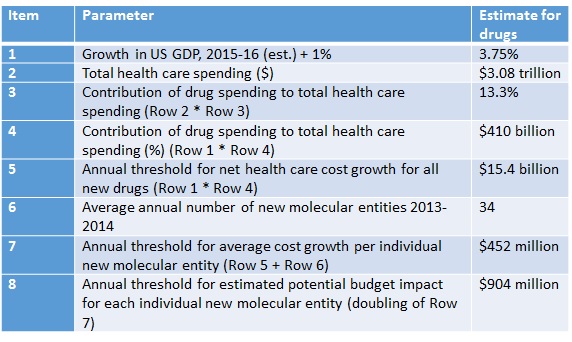 ICER focuses on net change in total health care costs. That means that cost offsets are accounted for in calculations. It also uses ‘broad assumptions’ that suppose no actions by payers or providers that would reduce uptake. In practice, uptake can be affected by prior-authorisation requirements, for example.

Uptake is a crucial driver of budget impact. ICER considers a number of factors that can affect uptake or, rather, can be thought of as modifiers for demand, including:

ICER describes the implications of breaching the budget impact threshold as an ‘alarm bell’ warning that the intervention needs ‘special attention’. That attention could be as benign as early dialogue, simply to establish that real-world uptake could be less than expected and budget impact correspondingly lower too. Other options could be to seek savings in other areas, change the payment mechanism, such as to longer terms and/or lower price, prioritising certain patients, or sharing the costs across different parties.

There are likely to be similarities in the ‘nuts and bolts’ of the budget impact calculation, assuming NICE will use its resource impact assessment approach (though this isn’t clearly stated in the proposals). However that is, arguably, where the similarities end between ICER and the proposals from NHSE and NICE.

NICE and NHSE: a budget impact threshold with no underpinnings?

On the threshold value itself, NICE and NHSE proposals suggest £20 million in any of the first three financial years post launch. This seems to be underpinned not by any principles but rather the fact that 20% of positive appraisals between June 2015 and June 2016 would breach it. No data is shared to check the calculations in the proposals. Presumably this leads to a manageable number of commercial access agreements that the proposals envision.

This is in stark contrast to the underpinnings set out by ICER, which are driven by a judgement on what is affordable in the future, assuming growth in the economy, but also with all the numbers available for all to see.

ICER takes a five-year perspective, too, not the three years of NICE and NHSE proposals.

What will a commercial discussion mean?

On the question of what happens when budget impact is breached, ICER sets out a range of options. The NICE and NHSE proposals suggest only a commercial discussion that may then lead to a commercial access agreement.

So there is not much substance to go on, and many will fear that this represents a desire to drive discounts. There is some justification for this view; in practice provisions for patient access schemes (PAS) that could allow for complex or simple schemes have been, overwhelmingly, simple discounts.

NHSE will probably need some convincing to consider something other than a discount, although Simon Stevens’ foreword as part of the Accelerated Access Review (AAR) – an independent review into how to speed up adoption of innovation in the NHS – did refer to outcomes-based, annuity-based and volume-based pricing deals.

There’s also a broader point where the approaches differ; ICER is independent, whereas the NICE and NHSE proposals are planned jointly and envisage a role for NICE to both develop the budget impact estimates and facilitate the discussion of a commercial access agreement. That puts NICE in a less clearly arms-length role. Is that a problem? Maybe not. NICE staff are used to working in a tense environment, and working with stakeholders with vested interests.

Although there may be concern that NICE could come under pressure to make high estimates of budget impact to allow NHSE to negotiate, that may be unlikely in practice.

But there is a question of just how independent NICE should be to NHSE, especially as the proposals could give NHSE much leeway in delaying final NICE guidance. That could mean slower access to even cost-effective new medicines for patients. In that case, would NICE or NHSE, or both, be blamed, or the companies involved?

Lessons for the UK

The proposals are likely to be controversial and unwelcome, especially in the wider context of the Pharmaceutical Price Regulation Scheme (PPRS) effectively capping NHS spend on branded medicines.

However, incorporating budget impact when considering adoption of a new medicine is probably a good idea, and something that shouldn’t have been excluded when NICE was first established. After all, budget impact is a real issue for the NHS. Ideally new medicines save money, then they might be budget neutral, but for those that generate net costs – especially those that can’t be funded out of growth in the NHS budget – the NHS must decide what to stop spending on, or what other new investments to forgo.

Accepting the argument that budget impact should be a consideration, the next question is how it should be done, by whom, and when. The ICER approach offers some lessons that could be incorporated if NICE and NHSE are open to changing their proposals.

The UK proposals could benefit from the ICER approach of both linking affordability to the growth in health spend, but also publishing the details of the calculation that results in the magic number. That provides transparency and perhaps reassurance that there is some underpinning logic that will shape future budget impact thresholds too; that is missing from the NICE and NHSE proposals. It may be £20 million this year, but what stops it being £10 million or £30 million next year because of another arbitrary choice of date ranges for past decisions that don’t link to NHS funding?

There is also merit in setting out a framework for the options that might be appropriate to deal with high budget impact. Discounting is just one option; there are others that may be worth considering, such as ‘mortgages’ or deferred payment.

As mentioned earlier, the plans from NICE and NHSE will not be welcomed by industry, and are likely to be seen as yet another opportunity to control cost and, potentially, delay access.

It’s difficult to determine the impact of ICER’s budget recommendations on the value of new drugs. It is one component of many – not least price – that will inform the votes of stakeholder meetings that use its analysis. ICER is also independent and it’s up to payers to draw on its work as they see fit. There’s evidence that some, but not all, are doing this.

The effect of the NICE and NHSE budget impact proposals is hard to predict, not only because they could change as the organisations reflect on feedback on their consultation, ending on 13 January 2017. Much will also depend on the interaction of NHSE and individual companies and their respective appetites to stand firm.

Whatever the final approach, patients should not face the price of delay and NHSE and companies will need to be reasonable – something that is always easier said than done.

Read more:  What’s the right price for new medicines in the US? This man thinks he has the answer.  Deep Dive interview with ICER’s Steven Pearson.

Read more on this topic from Leela Barham:

The budget impact of new medicines