The budget impact of new medicines

The National Institute for Health and Care Excellence (NICE) and NHS England (NHSE) have set out proposals that, among other changes, include introducing a new ‘budget impact threshold’, beyond which even those medicines considered cost effective will need to go through what amounts to a commercial negotiation with NHSE. Before the consultation closes on 13 January, Leela Barham takes a closer look.

The NICE and NHSE proposals have put forward a budget impact threshold of £20 million a year, for each of the first three financial years following new technology launch. (NICE points out in the consultation document that NHSE has set the figure, so perhaps NICE is not so sure of it?)

Having an estimated budget impact beyond the £20 million will ‘signal the need for a dialogue with companies to agree special arrangements to better manage the introduction of new technologies recommended by NICE’.

The proposals make it clear that budget impact won’t affect NICE’s consideration of a new medicine. Instead, it will be a separate activity, sitting outside of the appraisal.

What isn’t clear is exactly where the £20 million figure has come from. The proposals say that, looking back at positive Technology Appraisals (TAs) by NICE from June 2015 to June 2016, 80% fell below the proposed budget impact threshold. That choice of time period seems pretty arbitrary and it’s also backward looking; what will be the budget impact of future new medicines and will they be putting strain on the (already strained) NHS?

NICE to analyse the budget impact

NICE will have responsibility for estimating the budget impact of new medicines. Exactly how it will approach this task hasn’t been set out, although it already produces resource impact assessments.

Resource impact assessments start sensibly with estimating patient volumes, beginning with prevalence of a disease. In practice, though, the challenge lies in the art of breaking this patient population down further, according to those who may really be eligible for treatment. That could be a very different number.

Eligibility for treatment is complicated for many of today’s treatments, which may be second or third line or where a particular biomarker needs to be tested for. This becomes even more complicated when you allow for clinician and patient preferences. This is perhaps why NICE says that it will ‘take advice from the manufacturer and clinical experts in making this estimate’. Missing is whether patients will have a view; that may or may not matter, depending upon whether the new medicines have any particular issues for compliance and adherence or side effects that need to be managed, which can affect patients’ willingness to take them.

Then there is the other side of budget impact to volume: price. Analysis of NICE’s resource impact assessments for Single Technology Appraisals (STAs) for 2015/16 illustrate the challenge with pricing. Of the 39 STAs in the year, 21% resulted in a budget impact that NICE can’t publish because of commercial-in-confidence discounts. Instead, commissioners need to go and find out the relevant discount before they can use NICE tools to estimate what it means to their budgets.

Estimating the past budget impact of NICE STAs

Setting aside those new technologies where there is not a budget impact estimate available, there were five STAs classed as ‘high’ cost, equivalent to 16% if we just consider positive STAs in 2015/16. Only one of those – aflibercept for macular oedema – is estimated to have a budget impact over £20 million in one of the first three years. That estimate doesn’t account for the patient access scheme discount, so it may not hit the £20 million in any case.

There is good news too, though; there were eight new technologies that were either cost neutral or even cost saving, and more that were low cost than high cost as well (Figure 1). Given the cost saving estimated, the net budget impact of new technologies supported by a positive STA in 2015/16 was estimated to be in the region of £65 million in a steady state. Bear in mind, though, all of those where NICE cannot publish the budget impact. 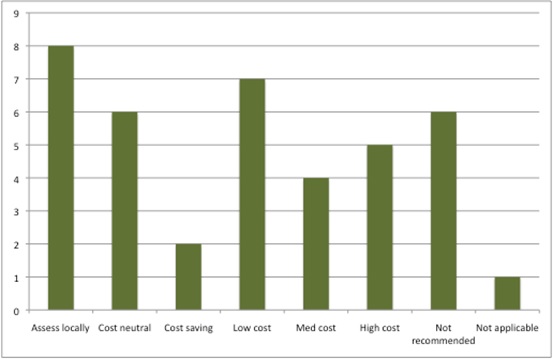 Of course, these estimates are just that; informed guesswork. The real budget impact may well differ. Again that is hard to delve in to. There are suggestions, though, that uptake can be lower than expected from NICE guidance; the Innovation Scorecard found that, from April 2015 to March 2016, this was the case for five out of six groups of medicines tracked. The reasons are mixed and include the difficulty in getting the prevalence and incidence right in the first place, availability of other competing medicines, time needed for prescribers to become familiar with a new medicine, expense including whether the price is bundled in with other costs or not when hospitals are reimbursed, issues with local pathways and, last but not least, drug safety updates.

NICE and NHSE have presumably tabled their proposals now because of their concerns about managing the budget impact of future new technologies.

So what is the budget impact likely to be? Just as in 2015/16, there are a number of positive STAs where there isn’t a published NICE resource impact because of commercial-in-confidence discounts (17 out of 70 STAs). Where there is a quantified budget impact, it appears in the order of just under £100 million in a steady state.

Again, as was the case in 2015/16, there are technologies where there is a cost saving or cost neutrality (Figure 2). There is only one considered ‘high cost’. 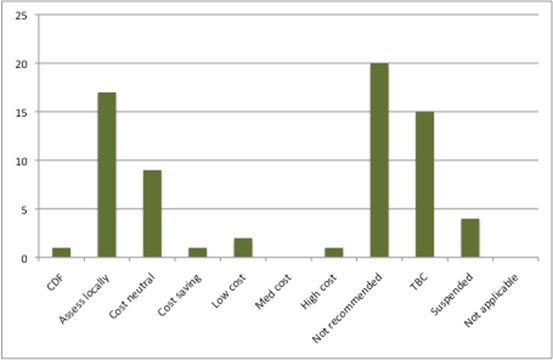 It is likely that NICE will retain its approach to estimating resource impact (or budget impact). That means, in practical terms, only NICE and NHSE will know whether budget impact is likely to be high and, if so, high enough to trigger the budget impact threshold. Will there be a temptation to estimate a high budget impact that tips new medicines over into negotiation, especially if no-one else can verify the estimates? And if those estimates do prove to be too high versus a much lower real budget impact later, no-one can seriously expect NHSE to come back to the table to discuss price again.

In the event that the budget impact threshold is triggered, speed of access may well be at stake. The standard 90-day funding requirement may not apply if a company and NHSE can’t agree a commercial agreement. NHSE could ask NICE to vary the standard funding requirement, potentially leading to ‘phased introduction’. This suggests patient access would be one bargaining chip available to NHSE.

What is affordable anyway?

These proposals underlie a broader affordability debate. There are those who suggest that the NHS is underfunded and that much would become affordable if only the NHS were given enough money. The problem is finding agreement on just what ‘enough’ is. It also does little to ensure that however much is spent, it is spent as well as it can be. Efficiency remains a buzzword for the NHS, and if the NHS were more efficient, it may well free up resources.

There are also those who are confused about why these proposals have come out during the lifetime of the 2014 Pharmaceutical Price Regulation Scheme (PPRS). This scheme sets a limit on spend by the NHS on branded medicines (with some caveats as it’s not all-encompassing, hence Simon Stevens’ comments of a ‘leaky’ PPRS). PPRS members pay back when spend goes above the limit, making the medicines bill ‘affordable’ (or at least within the bounds of historical spend on medicines, which has been manageable, in aggregate terms, in the past).

Some have suggested that companies adopt a cost-neutral pricing strategy; price at the level of your competitors, secure your NICE ‘yes’ and avoid any kind of discussion with NHSE. Those that really do have a superior product should hope to secure market share as competition plays out. However, whether the economics (and politics) within a company really allow this is unclear, to say the least.

The debate on affordability will continue. And it’s too early to say who will win it.

About the author:
Leela Barham is an independent health economist and policy expert who has worked with all stakeholders across the health care system, both in the UK and internationally. Leela works on a variety of issues: from the health and wellbeing of NHS staff to pricing and reimbursement of medicines and policies such as the Cancer Drugs Fund and Patient Access Schemes. Find out more here and contact Leela on leels@btinternet.com.

NICE’s Office for Market Access: is it unlocking value for pharma?