When the Indian government changed the guidance around conducting clinical trials, it put the country out of step with the rest of the world and led to a dramatic drop in numbers of approvals. Gopal Pai explains what the problems were and what changes have been made since to improve the situation.

A year ago, the clinical research environment in India was set back drastically by government guidance changes, which caused concern for the global research community looking to conduct clinical research projects there. Their fears related to perceived additional risks around serious adverse events (SAEs) causing death and injury, plus related compensation/medical reimbursements which were not in line with wider international standards. Even the country’s insurance industry could not support some of the amendments.

Following urgent discussions, these guidelines have been revisited and changed to align more with global standards and timelines, which has helped the sector recover in the last few months.

The recent amendments will help the trials environment improve further, but numbers will still be low owing to specific conditions, based on local benefits vs risks, that will influence the decision of the regulators when they make a ‘go’ or ‘no-go’ decision.

The two important aspects that have now been rolled back to global standards are the safety reporting timelines and the compensation related to SAE death and injuries related to the study drug. These new guidelines were implemented in June 2015.

The first outcome after the debates on the July changes was an order issued in September 2014, stating that all the global clinical trials should be evaluated based on three parameters, to avoid unnecessary trials being conducted in India:

• Assessment of risk versus benefit to patients;

• Unmet medical need in the country.

This is now the most important summary that must be incorporated with the regulatory approval documents. It is pivotal to a study being evaluated by the Subject Expert Committee (SEC), within the Drug Controller General of India’s (DCGI) approval process.

It will ensure a good level of transparency around the decision-making process on global clinical trials being approved by the regulatory agencies. If there are no strong arguments in favour of the benefits to the Indian population and the drug’s impact on the above three elements in the trial, it should be assumed that the regulatory agency will not provide approvals unless a more convincing medical rationale is provided on the advantages to citizens and community health statistics.

Previously, the safety reporting timelines specified that the investigator must report any SAE within 10 days of its occurrence, as per the guidance, GSR 53(E), dated 30 January 2013. This requirement was a major challenge as it conflicted with all the international guidance and database tracking systems and regulatory timelines, which specified 14 days. The new version of the guidance has brought India into line and now states 14 days too, vide the new guidance, GSR 889(E), dated 12 December 2014. 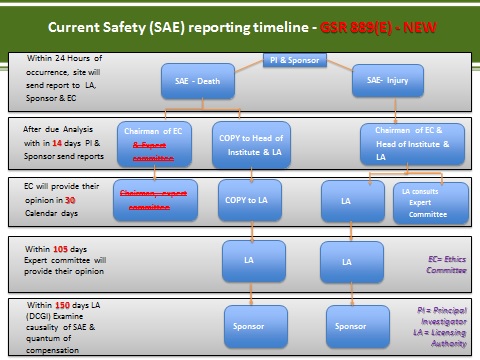 The changes to the other clauses clarify the circumstances around compensation and free medical management. A comparison of the changes is presented in Figures 2 and 3. 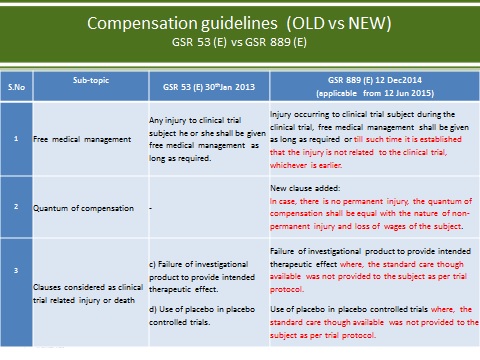 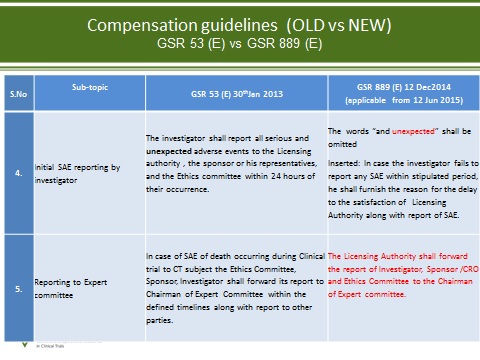 As per this notice, the regulatory pathways for applicants will be simplified, enhancing:

These standards were prepared by the National Accreditation Board for Hospitals and Healthcare Providers (NABH) and the Quality Council of India, in consultation with various stakeholders. The draft set out the criteria for the accreditation of ethics committees, investigators and sites.

These standards are not mandatory yet, but it is anticipated that over the next few years, all the key parties will be made accountable and their operational standards improved as a result of these efforts by the country’s regulators.

Gopal Pai PhD is general manager at George Clinical India. He holds a postgraduate degree in Microbiology and a doctorate degree in Applied Biology from Mumbai University. He has formal business management training and over 25 years’ experience in pharmaceutical research and development.

Global clinical trials: be aware of the pitfalls